CNN glosses over Iran’s claims that Zam and his media operation helped incite deadly violence during protests targeting the Iranian government in 2017 and 2018 and instead cites Western government and corporate foundation-funded “rights” groups who condemned the execution.

Near the end of the article, CNN briefly mentions Fars News Agency which detailed the security operation Iran carried out to capture Zam in France and bring him back to face justice in its article, “Riot Provocateur Rouhollah Zam Executed.”

And while the Western media portrays Iran’s claims and charges against Zam as somehow embellished or disproportionate in the wake of his execution – the Western media had previously admitted as much about Zam and his activities in Iran themselves. 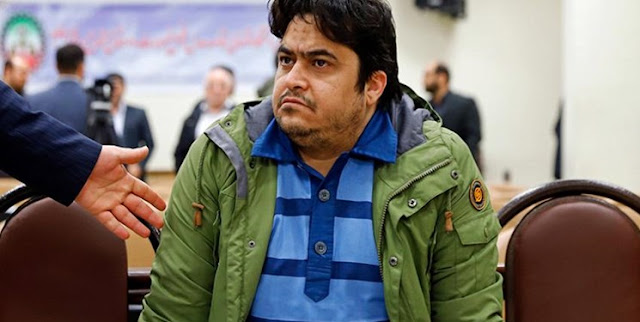 In a 2018 Daily Beast article titled, “The App Powering the Uprising in Iran, Where Some Channels Pushed for Violence,” it would admit that Zam ran “Amad News” and that (emphasis added):

Two channels on the encrypted messaging app Telegram, Amad News and Restart, have become major players in Iranian political discourse in recent weeks. The best-known figure associated with Amad News is Ruhollah Zam, while Restart is run by Mohammad Hosseini. Both channels have been accused of inciting violence.

Then managers of Amad News announced that the person responsible for encouraging violence had been fired.

The Daily Beast even admits that Zam – as well as fellow agitator Hosseini – had both been involved in the US State Department’s Voice of America media platform, admitting (emphasis added):

In recent months, the Restart group has gained support from the Bayan Media Network, the director of which is Bijan Farhoodi who used to work with the Voice of America (VOA). Also, the program Last Page on VOA TV network, which is hosted by Mehdi Falahati, has frequently invited Ruhollah Zam on its broadcasts. There is no evidence that this proves a systematic connection between them, but what is clear is that Restart and Amad have succeeded in securing powerful platforms for their agendas.

While the Daily Beast – even in 2018 – tried to downplay the significance of Zam’s media operation inciting violence, undermining the Iranian government, and promoting unrest all while appearing on US government-funded media networks – US policymakers themselves have admitted in detailed policy papers that this would be precisely the plan used by the US government to overthrow the government of Iran.

US Plans for Iranian Regime Change

The 2009 Brookings Institution paper, “Which Path to Persia? Options for a New American Strategy Toward Iran,” would extensively lay out this plan under chapter 6 titled, “Supporting a Popular Uprising.”

Under this chapter, Brookings policymakers would explain (emphasis added):


The United States could play multiple roles in facilitating a revolution. By funding and helping organize domestic rivals of the regime, the United States could create an alternative leadership to seize power. As Raymond Tanter of the Iran Policy Committee argues, students and other groups “need covert backing for their demonstrations. They need fax machines. They need Internet access, funds to duplicate materials, and funds to keep vigilantes from beating them up.” Beyond this, U.S.-backed media outlets could highlight regime shortcomings and make otherwise obscure critics more prominent. The United States already supports Persian language satellite television (Voice of America Persian) and radio (Radio Farda) that bring unfiltered news to Iranians (in recent years, these have taken the lion’s share of overt U.S. funding for promoting democracy in Iran). U.S. economic pressure (and perhaps military pressure as well) can discredit the regime, making the population hungry for a rival leadership.

US plans to engineer an uprising are clearly meant to be combined with military and economic pressure – two components at odds with international law and which represent a constant existential threat to Iran’s leadership and population. The deaths of Iranian generals and scientists in recent months highlights how real US regime change efforts are and the life and death struggle Iran finds itself in.

Iran is surrounded by nations – Iraq and Afghanistan – currently occupied by US military forces who have killed tens of thousands in both nations, displaced millions, and have created enduring sociopolitical and economic hardship all along Iran’s borders. The US openly aspires to do likewise within Iran’s borders.

Zam’s involvement in this plan would clearly implicate him in acts of treason – treason defined by Merriam-Webster as: (noun) the offense of attempting by overt acts to overthrow the government of the state to which the offender owes allegiance – and treason unforgivable considering the outcomes of similar US-backed regime change operations in neighboring Iraq and Afghanistan.

Without this context – the Western media deliberately attempts not only to cover up what Zam did to Iran, its government, and its people, but is at the same time attempting to further advance US regime change efforts against Iran by portraying the nation as a brutal regime rather than a government determined to prevent its own people from suffering the same fate as Iraq, Afghanistan, and more recently, Libya and Syria.

For Iran, the message sent by Zam’s execution is clear – those involved in US-backed regime change in Iran – efforts aimed at destroying Iran in the same manner the US has destroyed Afghanistan, Iraq, Libya, and Syria in – will pay the ultimate price and the West’s promises of protection, profits, and fame are not guarantees.

Daily Beast – The App Powering the Uprising in Iran, Where Some Channels Pushed for Violence: