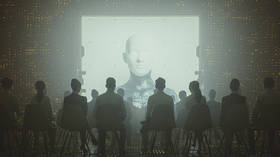 By Dr. Mathew Maavak, a Malaysian expert on risk foresight and governance.

If Covid-19 has been a boon for anyone, that would be Big Business and Big Tech – overblowing fears, widening the wealth gap and facilitating global control through all-powerful technology the world now depends on.

What happens when systems cross the threshold of peak complexity and can no longer be improved in their current forms? Decision-makers can commission competing models in order to pick a winner. This however calls for patience, prudence and sound oversight. Alternately, they can pounce on a fantastical blueprint that will supposedly gel via Artificial Intelligence and get to play monopoly at the same time. An all-in-one solution!

Such thinking was precisely what beleaguered the F-35 combat aircraft program with its estimated $1.7 trillion in lifetime costs. After 20 years of troubled development, the stealth fighter’s problems have become so insurmountable that there is talk in the US Air Force of considering a clean slate fighter jet program to replace its ageing F-16s.

The F-35 illustrates the other barely-analysed pandemic infecting our world – that of ‘technological voodooism’ (coined by the author for want of a better term).

Returns on investments these days are no longer measured by healthy profits generated by proven products. The devotees of techno-voodooism are essentially totalitarians who believe that not just markets, but the world itself, must be reorganized and monopolized by an enlightened few in a smart era called the Great Reset. The prime agency promoting this technopia is the World Economic Forum (WEF) which has promised a wonderful world where we will “own nothing” and yet “be happy.”

The outcome thus far has been societal meltdowns, malfunctioning jets in the skies and iRobot Roomba vacuums that meander aimlessly on the floor. The modern adage ‘if it ain’t broke, don’t fix it’ may have been lost on iRobot’s C-Suite executives. Roomba machines use “artificial intelligence to scan room size, identify obstacles and remember the most efficient routes for cleaning.” But the quest for greater efficiency and profits at lesser costs – a process which Buckminster Fuller called ‘ephemeralization’ more than 80 years ago – has resulted in smart updates and berserk gadgets. Even after the vacuum is reset, IoT connectivity ensures that the robot is updated back to its state of regression.

Now, imagine the consequences of similar systems breakdowns worldwide? For starters, consider the point of singularity when robot chefs are updated with a new definition of what constitutes meat? A berserk Roomba machine can at least be switched off and plopped down as a paperweight. That is not an option for Boeing 737 MAX 8 planes which reportedly used artificial intelligence to bend aerodynamic laws on the cheap.

The string of Boeing disasters – as well as other failures mentioned thus far – has not deterred the merchants of techno-voodooism. Instead, every new crisis is seen as an opportunity for AI-mediated quick fixes and big profits. Remember Big Tech’s apocalyptic Covid-19 projections of the previous year? Pseudosciences, based on the chimera of smart systems have been allowed to run amok, emboldening the WEF to claim that Covid-19 “lockdowns are quietly improving cities around the world.” Tell that to the tens of millions of small businesses who have lost their livelihoods to multinational corporations. Just how did cities improve with the archipelago of trash that piled up during lockdowns? What about the environmental impacts which happen to be a pet peeve of the WEF?

It is not just cities that have supposedly “improved” with Covid-19. Bill Gates is now the largest owner of farmland in the United States – coincidentally at a time when lockdowns have worsened food security and incomes among the poor. Logically, this great humanitarian could have matched his suite of predictive analytics software with owned farmland capacity to alleviate lockdown-induced hunger, but Gates is reportedly too busy promoting synthetic beef and vaccines.

The global ‘coronapsychosis’ has in fact accelerated wealth fractionation at the expense of the mid-to-low income classes. Just 655 people now own $4 trillion in wealth, while 200 million can’t cover a $1,000 expense in the United States alone. Imagine the sheer numbers of the impoverished worldwide, especially in nations bonded to the Anglo-American compact?

As for Covid-19 itself, inconvenient facts are routinely censored or shadow-banned by AI-powered social media platforms and search engines. Annual flu deaths in the US – which the British Medical Journal once questioned whether it was more PR than science – have surprisingly disappeared from official health statistics due to the pandemic.

Big Tech will not allow us to question the efficacy of vaccines developed in the West. After all, Artificial Intelligence has seemingly accelerated the development of vaccines that would have otherwise taken years or decades to research, test and deploy. We should not ask why dozens of people (as of early February) had contracted a rare blood disorder after taking vaccines from Pfizer and Moderna. Or why there is an alarming number of deaths from Norway to Spain to the Netherlands post-vaccination? Or even how thousands of Israelis could test positive for Covid-19 despite receiving Pfizer/BioNTech jabs?

The Covid-19 vaccination figures in Israel are so alarming that two researchers have even called the fiasco “a new Holocaust.” Yet, the Israeli government wants local authorities to maintain a database of its vaccine refuseniks. (The Nazis, too, once maintained a meticulous database of “undesirables” in localities they were about to occupy, but that historical parallel is lost on today’s lamestream media).

Techno-voodooism did not emerge in a vacuum. It thrived in tandem with ‘inclusivity’ and ‘sustainability’ programs which, in turn, handed the reins of power, scholarship and opinion-making to a horde of half-wits worldwide. This is one reason why governments, backed by spineless bureaucrats and academics, are increasingly surrendering national sovereignties to Big Tech. One can imagine the quid pro quo: A post-retirement sinecure; jobs for children and relatives; and coding opportunities for trolls who push the Big Tech agenda. No wonder planes are falling from the skies and a raft of disasters await humanity throughout this decade.

Europe is an exemplar in this regard. Its leaders are now worried that Apple and Google may end up issuing Covid-19 health certificates before the union can reach a consensus. Isn’t that the job of sovereign governments with taxpayer-funded healthcare systems? But this trend is getting more sordid by the day. Bureaucrats are falling over each other to gift vaccine roadmaps and distributions systems to Big Tech because their AI-driven systems can supposedly deliver optimal outcomes. They should just pick Bill Gates’ concept of using mosquitoes as airborne syringes. Call it a bang for the bite!

These shameless capitulations are not limited to the healthcare sector alone. Entire government machineries are gradually hived off to Big Tech. The trailblazing US state of Nevada may even allow tech giants to set up their own governments. These entities can impose taxes, form school districts and even run the judicial system. The first such ‘smart city’ may break ground as early as 2022. What could possibly go wrong?

In the final analysis, while the author argues that Artificial Intelligence and smart systems have real, sectoral potentials, these have been hijacked by the techno-voodooism of Big Tech. We should therefore brace ourselves for a very turbulent decade!