April 10, 2021 (Brian Berletic – NEO) – Despite campaign promises made by now US President Joe Biden to return to the Joint Comprehensive Plan of Action (JCPOA) better known as the Iran Nuclear Deal – Washington’s return to the deal has predictably stalled. 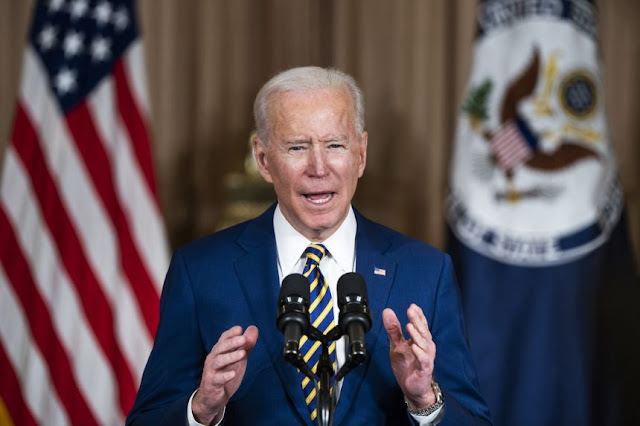 In February 2021, AP would report in its article, “Biden repudiates Trump on Iran, ready for talks on nuke deal,” that:

The Biden administration says it’s ready to join talks with Iran and world powers to discuss a return to the 2015 nuclear deal, in a sharp repudiation of former President Donald Trump’s “maximum pressure campaign” that sought to isolate the Islamic Republic.

The US had unilaterally withdrawn from the 2015-2016 deal brokered under the Obama-Biden administration in 2018 under US President Donald Trump. The deal was deemed “defective” and much more stringent conditions were demanded by the US with crushing economic sanctions under a policy of “maximum pressure” imposed until Iran capitulated.

Despite Biden’s attempts to distinguish his administration from Trump’s, his promise to return to the deal was conditional, requiring Iran to recommit to the deal’s conditions before the US lifts sanctions – and only after additional conditions are discussed – and until then, sanctions and other mechanisms of political pressure will be applied to Tehran.

Biden’s apparent desire to return to the table with Iran is in itself an admission that the Trump administration’s decision to leave the deal was a mistake.

The US – as self-proclaimed leader of the international community – would be expected to demonstrate good leadership by not only admitting to its mistakes, but assuming responsibility for them – returning to the Iran Nuclear Deal unconditionally and approaching additional concerns only after the original terms of the deal were back in place – with Iran in full compliance, and US sanctions lifted as promised under the original agreement.

Iran has every motivation to come in full compliance with the original agreement should sanctions be lifted – as it had in good faith complied before the US withdrawal in 2018. And while Iran has rolled back several of its commitments – it has not taken any steps yet which are not easily reversible. It is a signal from Tehran that it still desires to engage – but not without leverage.

It was the US – not Iran – who unilaterally withdrew from the deal, breaking its conditions and endangering the deal’s future. Iran would be remiss if it returned to the negotiation table in full compliance to the deal, with no leverage, and sitting across from the US who has so far acted in bad faith at every critical juncture throughout previous negotiations.

A Deal Meant to Be Broken…

The disparity between Washington’s words and its actions should come as no surprise however – especially considering that US foreign policy is not the product of the White House or even the Capitol – but rather corporate-funded policy think tanks chaired by special interests who transcend US elections.

It is worth repeating that a 2009 policy paper produced by the corporate-financier funded Brookings Institution titled, “Which Path to Persia? Options for a New American Strategy toward Iran,” detailed plans to lure Iran in with a deal related to its nuclear technology, accuse Iran of rejecting it, and thus serving as a pretext for further US aggression up to and including the invasion of Iran by military force.

...any military operation against Iran will likely be very unpopular around the world and require the proper international context—both to ensure the logistical support the operation would require and to minimize the blowback from it.

The paper then laid out how the US could appear to the world as a peacemaker and depict Iran’s betrayal of a “very good deal” as the pretext for an otherwise reluctant US military response (emphasis added):

The best way to minimize international opprobrium and maximize support (however, grudging or covert) is to strike only when there is a widespread conviction that the Iranians were given but then rejected a superb offer—one so good that only a regime determined to acquire nuclear weapons and acquire them for the wrong reasons would turn it down. Under those circumstances, the United States (or Israel) could portray its operations as taken in sorrow, not anger, and at least some in the international community would conclude that the Iranians “brought it on themselves” by refusing a very good deal.

In 2009 when these words were originally published it might have been difficult to imagine just how literally and overtly the US would attempt to execute this ploy against Tehran.

Yet in hindsight it is clear that the administration of US President Barack Obama (with Biden as Vice President) disingenuously offered this deal to Iran with full knowledge it would be betrayed in the near future – and was under Trump – with attempts to sabotage the deal further clearly underway by the Biden administration.

While the Biden administration repeatedly claims it wants to return to the deal, it has created conditions it knows Iran will never accept while simultaneously carrying out a series of provocative military strikes across the Middle East against militias backed by Iran combating dangerous extremism within the borders of Iran’s closest regional allies.

The 2009 Brookings paper also noted Israel’s role as provocateur – nominating Israel to carry out strikes on Iranian targets in the hopes of provoking an Iranian retaliation the US could use as a pretext for wider war.

We can see the US and Israel both engaged in attempts to escalate towards just such a scenario.

While occupants in the White House have changed three times now – a singular, belligerent US policy towards Iran – as laid out by the Brookings Institution’s 2009 paper – has remained unchanged and faithfully pursued for over a decade now.

The world now teeters upon a dangerous inflection point where the US finds itself out of excuses to delay returning to the deal and the window closing to “credibly” blame Iran for the deal’s failure. The political momentum of Washington’s accusations will fade fast and require expedient provocations to see this policy through to its end – or risk missing an opportune pretext for war and the required international “sympathy” needed to successfully execute it.

Iran has been and will need to continue avoiding these provocations, demonstrating its commitment to peace and stability in the region and distinguishing itself from the tactics, strategies, and agendas of the US and its regional allies. It must do all of this while also sustaining its economy under the extreme pressure of US sanctions and with the absolute necessity to ultimately address Iran’s national security against obvious threats within and along its borders.

Another important point to make when describing the negotiation table and the context it sits within – is the fact that US forces illegally occupy nations to the east and west of Iran’s borders as well as one of Iran’s closest regional allies – Syria.

US expectations that Iran obediently return to the table in full compliance to the original Nuclear Deal – across from the very nation responsible for its near total collapse – and a nation whose military – thousands of miles from its own shores occupies nations on either side of Iran’s borders – are not reasonable. That the Western media – a reflection of Washington’s actual agenda – attempts to portray this otherwise, gives a full sense to just how broad and deep the ill-faith is the US comes to these negotiations with.

Finally – Europe – also involved in the Nuclear Deal – needs to decide between peace, stability, and the economic benefits of working with Iran into the future – or continued capitulation to its Transatlantic partner, a continuously destabilized Middle East, and the prospect of a catastrophic war between the US and its allies against Iran.

Russia and China will play key roles in stacking the deck in favor of Europe’s siding with the former over the latter – and this stacking has been ongoing. But whether it will be enough to back the US off the warpath once and for all and begin its irreversible withdrawal from hitherto perpetual war and occupation across North Africa, the Middle East, and Central Asia – only time will tell.