Mars Attacks! hit theaters in December of 1996, it’s an anti-blockbuster, featuring an ensemble cast of mostly unlikeable characters getting brutally murked by an invading force of absurdist aliens who are less “pure evil” than they are “just a bunch of dickheads.”

Mars Attacks! is essentially a gigantic middle finger to the entire concept of blockbuster movies, with the aliens blasting virtually every recognizable star into flesh dust. 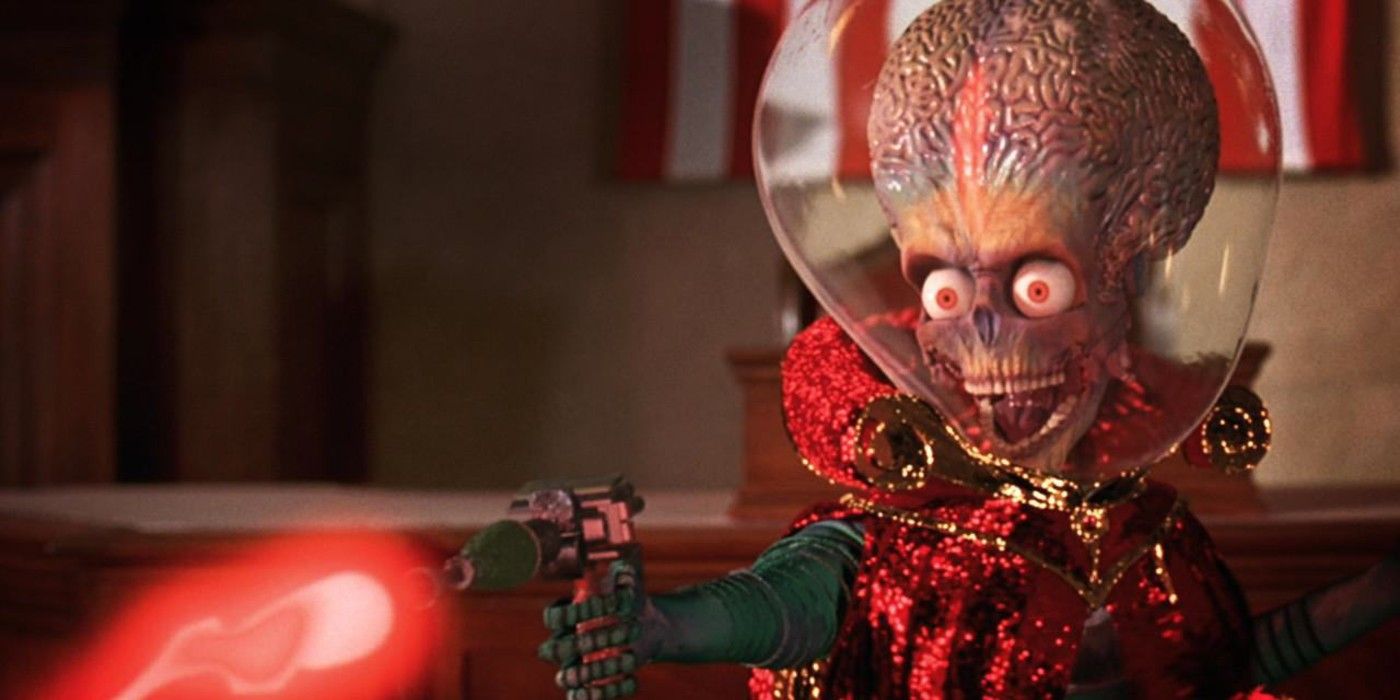 The movie is black comic chaos from start to finish, and unfortunately, nobody in 1996 wanted to see that shit.

But Mars Attacks! deserves to be celebrated, not just for casting Tom Jones as one of the saviors of humanity, but for being a sharp, venomous satire of blockbuster filmmaking and American apple pie bullsh#t in a “decade” when very few people were interested in hearing that kind of criticism.

(Notice how the Martians attack every time the word Peace is mentioned. I suppose anyone watching the foreign mercenaries offering boxes of food and aid in the name of Peace would equate the same thing. Just a thought.)

The plot is extremely simple – an army of invaders from Mars arrive on Earth and proceed to conquer it through hilarious violence. Like a ten-foot death ray directly up to the ass of an extremely old woman.

Along the way we meet over a dozen different characters, and The absolutely unbelievable cast includes
Jack Nicholson as both the president and a sleazy Las Vegas grifter, Glenn Close as the First Lady, and Natalie Portman as the president’s daughter, who is inexplicably named Taffy (which so happens to be my favorite candy, Laffy Taffy.)

Also, Annette Bening, Pierce Brosnan, Michael J. Fox, Sarah Jessica Parker, Martin Short, Jim Brown, Pam Grier, Danny DeVito, Rod Steiger, Christina Applegate, and a pre-fame Jack Black. And roughly 90% majority of these stars get murked in extremely humiliating fashion within two or three scenes of appearing. The heroes of the film end up being a dirt-poor teenager and his senile grandma, a moony New Age lady, and a working-class family of four (and, I cannot stress this enough, Tom Jones).

The primary dynamic of the movie is that everyone in a position of power or esteem is a complete buffoon, and they are simply not prepared to deal with the Martians, who don’t want anything but Anarchy in the UK.

President Jack Nicholson and the rest of the world’s leaders believe they must be able to reach some kind of peaceful solution by reasoning with the Martians as one advanced society to another, despite the fact that the Martians keep turning every diplomatic meeting into a gonzo shooting gallery, and death-rayed into powdery bones.

The characters who survive are the ones who gave up trying to defend institutions like the government (or the Vegas casino where they worked) in favor of rescuing their friends and loved – culminating in a victory for Planet “Earth”.