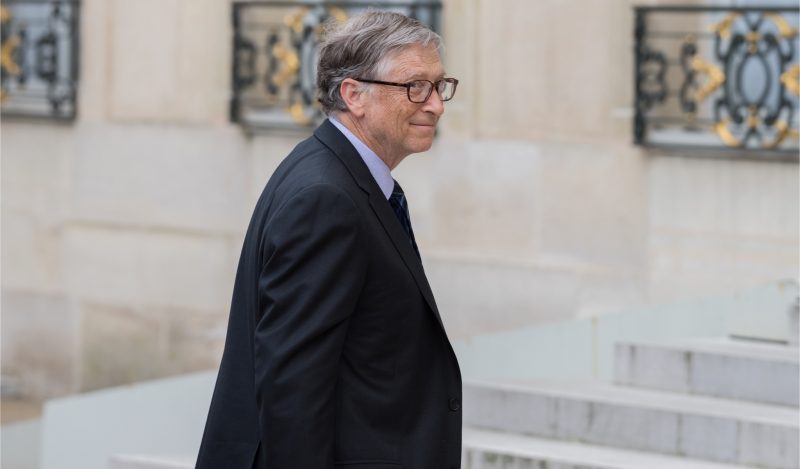 Why Bill Gates Is Pivoting on Existing Covid Vaccines

It’s odd how he speaks of medicines as if they are like software. Try it out, observe how it works. When you find a problem, put the technicians to work. Every new iteration is an experiment. Free to try until you finally buy. Surely over time, we’ll find the answer to the problem of blocking or blotting out pathogens.

Software. Hardware. Applications. Subscriptions! This is how he thinks, as if the human body and its deadly dance with viruses is a recent problem and we are only at the very beginning of finding solutions, without realizing that this reality has been present for the whole of human existence and that we had tremendous success in the course of the 20th century minimizing bad pathogenic outcomes without his guidance and benefaction.

Essentially, he has long promoted the idea that traditional public health praxis was for the analog age; in the digital age, we need government planning, advanced technology, mass surveillance, and the ability to control human beings the way a software company manages personal computers.

Most people have no idea how such a rich and smart person could be so dim on essential matters of complex cell biology. Hacking the human body, improving it with uploads and downloads, is surely a more ominous challenge than inventing and managing man-made computers. So herein I try to present the reasons for Gates’s way of thinking.

The relative deficiencies of this vaccine to stop infection and transmission are now well known. There is some reason to believe that they achieve that much at least for the vulnerable population. What can we make of Gates’s passing statement: “We need a new way of doing vaccines”?

Let’s travel back in time to examine his career at Microsoft and his shepherding into existence the Windows operating system. By the early 1990s, it was being billed as the essential brain of the personal computer. Security considerations against viruses were not part of its design, however, simply because not that many people were using the internet so the threat level was low. The browser was not invented until 1995. Security of personal computers was not really a question that Microsoft had dealt with.

The neglect of this consideration turned into a disaster. By the early 2000s, there were thousands of versions of malware (also called bugs) floating around the internet and infecting computers running Windows worldwide. They ate hard drive. They sucked out data. They forced ads on people. They invaded your space with strange popups. They were wrecking the user experience and threatening the future of an entire industry.

The problem of malware was dubbed viruses. It was a metaphor. Not real. It’s not clear that Gates ever really understood that. Computer viruses aren’t anything like biological viruses. To maintain a clean and functioning hard drive, you want to avoid and block a computer virus at all costs. Any exposure is bad exposure. The fix is always avoidance until eradication.

With biological viruses, we have evolved to confront them through exposure and let our immune system develop to take them on. A body that blocks all pathogens without immunity is a weak one that will die at the first exposure, which will certainly come at some point in a modern society. An immune system that confronts most viruses and recovers grows stronger. That’s a gigantic difference that Gates never understood.

Regardless, the advent of the army of computer pathogens fundamentally threatened his proudest achievement. Microsoft frantically searched for a solution, but the creativity of the malware army moved too fast for its engineers.

Others sensed an opportunity. Companies specializing in anti-virus software had been doing business since the 1990s but grew more sophisticated in the early 2000s. Once the internet became fast enough, these software packages could be updated daily. There were ever newer companies, each with a different method and a different marketing and pricing model.

Eventually, the problem was mostly solved on the personal computer, but it took ten years. Even now, Microsoft’s products are less protected than Apple’s, and Microsoft has yet to come close to mitigating the problem of spam on its own native email client.

In short, keeping viruses out of computers constitutes the single biggest professional struggle in Gates’ life. The lesson he learned was that pathogen blocking and eradication was always the path forward. What he never really understood is that the word virus was merely a metaphor for unwanted and unwelcome computer code. The analogy breaks down in real life.

After finally stepping back from Microsoft’s operations, Gates started dabbling in other areas, as newly rich people tend to do. They often imagine themselves especially competent at taking on challenges that others have failed at simply because of their professional successes. Also by this point in his career, he was only surrounded by sycophants who would not interrupt his descent into crankiness.

And what subject did he pounce on? He would do to the world of pathogens what he did at Microsoft: he would stamp them out! He began with malaria and other issues and eventually decided to take on them all. And what was his solution? Of course: antivirus software. What is that? It is vaccines. Your body is the hard drive that he would save with his software-style solution.

At the beginning of the pandemic, I noted that Gates was pushing hard for lockdowns. His foundation was now funding research labs the world over with billions of dollars, plus universities and direct grants to scientists. He was also investing heavily in vaccine companies.

Early on in the pandemic, to get a sense of Gates’s views, I watched his TED talks. I began to realize something astonishing. He knew much less than anyone could discover by reading a book on cell biology from Amazon. He couldn’t even give a basic 9th-grade-level explanation of viruses and their interaction with the human body. And yet here he was lecturing the world about the coming pathogen and what should be done about it. His answer is always the same: more surveillance, more control, more technology.

Once you understand the simplicity of his core confusions, everything else he says makes sense from his point of view. He seems forever stuck in the fallacy that the human being is a cog in a massive machine called society that cries out for his managerial and technological leadership to improve to the point of operational perfection.

The rich, their pretenses, their influence: sometimes charming, sometimes beneficent, sometimes deeply malicious. Gates’s influence over epidemiology has been tremendously baneful, but it’s unclear whether he even knows it. In fact, I don’t think that he does. In some ways, that’s even more dangerous.

Readers might be quick to point out that Gates has benefited enormously from lockdowns and vaccine mandates, both seeing his former company grow to enormous size and from his stock ownership in vaccine makers. So yes, his ignorance has been rewarded handsomely. As for his influence on the world, history will not likely be forgiving.