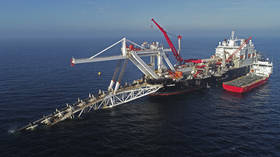 The CIA warned Berlin about a possible attack on gas pipelines in the Baltic Sea “weeks ago,” German magazine Der Spiegel reported on Tuesday. Germany was looking for answers after both of Russia’s Nord Stream pipelines were damaged and a massive gas leak appeared off the Danish island of Bornholm.

A tip from the US spy agency was “received in Berlin during the summer,” the outlet said, citing “several people familiar with the matter.” Officially, however, the federal government declined to comment on intelligence-related matters.

German security services are currently examining satellite imagery of the area where the explosions occurred, but see only “unremarkable” naval traffic, according to Spiegel. They are also convinced only a state actor could have done this, suggesting “divers or a mini-submarine” could have installed mines or explosives on the pipeline.

Nord Stream 1 and Nord Stream 2 both suddenly lost pressure on Monday. Danish authorities reported a gas leak off Bornholm, while Swedish seismologists registered multiple explosions. The pipeline operator confirmed multiple gas lines suffered “unprecedented” damage and it was impossible to estimate when, or if, service might be restored. 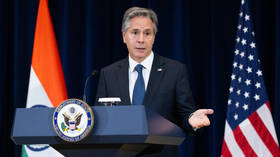 READ MORE: US speaks out on claims of ‘sabotage’ on Russia’s Nord Stream

By Monday evening, the German government was convinced the pipeline was targeted in a deliberate attack, according to the daily Tagesspiegel. Berlin was considering the possibility Ukraine or “Ukraine-affiliated forces” could be behind it, but also a “false flag” by Russia to make Ukraine look bad and drive EU energy prices even higher.

While acknowledging that the “permanent interruption of gas supplies from Russia” would be in Ukraine’s interest, Der Spiegel said such an attack would have “immense political disadvantages” for Kiev. The only motive for Moscow to blow up the pipeline, according to the magazine, would be to “blame other parties for the incident.”

EU Commission President Ursula von der Leyen has called for an investigation to get “full clarity” on what happened with the pipeline. “Any deliberate disruption of active European energy infrastructure is unacceptable and will lead to the strongest possible response,” she tweeted. 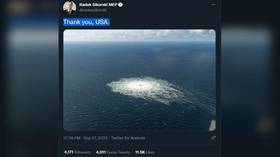 Earlier on Tuesday, US Secretary of State Antony Blinken said an attack on Nord Stream was “in no one’s interest,” but that it also represented a “significant opportunity” for Europe to abandon Russian natural gas in favor of alternative energy supplies, presumably such as US LNG, and “accelerate the transition to renewables” in order to fight climate change.

Meanwhile, Polish MEP Radislaw Sikorski thanked the US for the gas explosion, and argued that it means Russia will not have to negotiate with Ukraine and Poland if it wishes to deliver gas to Central Europe.