Protests in Iran have spread for a second consecutive day after student-led demonstrations and clashes with police at a Tehran university Saturday saw crowds chanting “death to liars!” and “Khamenei] resign, resign!” They are demanding that Iran’s leaders, including Ayatollah Khamenei step down over their initially concealing the truth about the accidental Ukrainian airline shoot down, which killed all 176 people on board.

The initial hundreds or possibly thousands strong gatherings in Tehran spread to other cities amid a broad heightened security response which the day prior saw authorities briefly detain the British ambassador, reports Reuters; however, the size still pales in comparison to the tens of thousands which took to the streets in November, and more recently the some two million which took to the streets in support of slain IRGC Quds chief Qasem Soleimani during his funeral.

Riot police have been deployed to the University of Tehran campus after fresh protests there, with reports of tear gas and after the previous day opposition social media accounts advanced unconfirmed claims that live fire was being used. On this point, President Trump had an early Sunday message for the Islamic Republic’s leaders and security forces:

To the leaders of Iran – DO NOT KILL YOUR PROTESTERS. Thousands have already been killed or imprisoned by you, and the World is watching. More importantly, the USA is watching. Turn your internet back on and let reporters roam free! Stop the killing of your great Iranian people!

But it also appears that some counter-protests have begun in Tehran, as The Guardian notes that ”Pro-regime protesters also gathered outside the UK embassy calling for its closure after the British ambassador to Iran was briefly detained on Saturday evening after leaving the site of a demonstration.”

Upon the very start of the new protests over the airline downing, Trump on Saturday issued a series of tweets in English and Farsi voicing support for what was as that moment a mere hundreds in the streets, crowds which appear to have since grown.

“To the brave, long-suffering people of Iran: I’ve stood with you since the beginning of my Presidency, and my Administration will continue to stand with you,” he tweeted. “There can not be another massacre of peaceful protesters, nor an internet shutdown. The world is watching.”

Given we appear possibly set for a November repeat, which saw hundreds killed at the hands of Iranian security according to most international reports and human rights organizations (though the US claimed at the time the dubious number of up to 1,000), local security forces aren’t taking any chances.

At the height of the Iranian establishment anti Americanism, Tehran Beheshti university’s students refused walking over the US and Israel flag while participating in #IranProtests . They all grew up to hate the two countries but seems like the revolutionary ideology is failed. 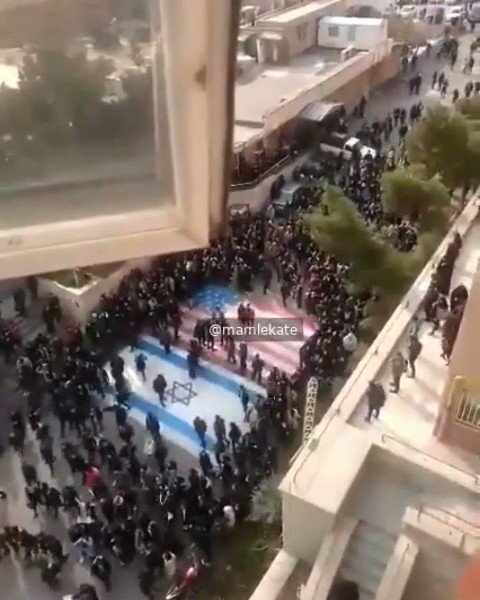 Videos on social media, which couldn’t immediately be verified by Bloomberg, showed motorcycle-mounted security forces in green camouflage and anti-riot body armor stationed on the city’s Valiasr square on Sunday morning. There was also a heavy police presence outside Tehran university.

The US State Department is poised to make much of these initial weekend student protests, though it’s as yet unclear if they will gain in momentum.

Loading...
"Not by might, nor by power, but by my spirit, saith the Lord of hosts." Zechariah 4:6
BEFORE IT'S NEWS ON TELEGRAM
GET THE TELEGRAM APP - https://telegram.org/ JOIN OUR CHANNEL - https://t.me/BeforeitsNews
Read it..
BEFORE IT'S NEWS
SIGN UP FOR OUR NEWSLETTER
Today's Top Stories
Tsunami Coming! Biden Shocking New Revelations Only The Beginning
Lawsuit Accuses Facebook of Watching Instagram Users Through Phone Cameras
Sarah Westall: Military Coup! What is Planned & Names Behind the Plan - w/ Colonel Black & Harley Schlanger
SGTreport: Passion of the Christ's Actor Jim Caviezel Delivers NWO and Satan A Knock Out Blow
Live Stream! War in Kentucky! Officers Down! Protests Turn Violent Civil War 2.0
500K Taken into Re-Education Labor Camps & Mike Pence Issues Dire Warning to America!
Only 2% of All People Can Hear This Mysterious Sound – and Nobody Knows Why (Video)
Crimes Against Humanity Exposed! Truth Will Be Told! - A Must Video!
Crime Family? Exposing the Criminal Families & Their Puppet Masters - Must Video
Donald’s Greatest Show On Earth! Betrayal and Deception. The Nightmare Is Soon To Be Unleashed. Where Is This Coming Messiah Mentioned In Bible Prophecy? Awesome Videos
Loading...
Featured
X22Report: The Hunt Is on, [CF] Comes into Focus, Crimes Against Humanity! - Must Video
Blue Coup! Are They Willing to Destroy Our Republic to Cover-up Their Crimes? - Must Video
X22Report: V Recovery Continues, Economic Foundation Being Built, Watch the Market & Gold! - Great Video
President Trump Holds "Great American Comeback" Rally in Jacksonville, FL - Live Feed Now Video!
Glenn Beck: The MSM Is Lying to You About the Breonna Taylor Story! - Must Video
Deborah Tavares: Our Survival Will Depend on What We Do Today
Steve Quayle Unplugged! War Looms, Fearful Will Run, We Will Fight Via The Hagmann Report
The Year 2020 Has Democrats Melting Down Like Never Before! - Great Video
RichiefromBoston: We Are Under Attack, Act Accordingly!
Taxpayer Funding it All! New Que Drops! The Destruction of America! - Great Video
Loading...
Top Global
The Seeds Have Been Planted For The Next American Civil War. I Don’t Think Anything Stops It Now.
SGTreport: General Wesley Clark "We're Going to Take-Out 7 Countries in 5 Years"
Wanna bet that Aus’ is a testing ground for what’s coming soon?
WATCH: President Trump Slams China at United Nations: ‘China Must Be Held Accountable’
After Trump Shut Him Up, Vengeful Fauci Made NEW Sinister Plans & He’ll Stop At Nothing To Get It!
RichiefromBoston: A Major Part of Their Plan Was Right In Front Of Our Eyes
Breaking! China Warns What Comes Next In Taiwan!
BioWarfare: Chinese Communists “Intentionally” Unleashed “Frankenstein” COVID-19, Says Wuhan Scientist!
China is Spying on Millions of People & They Aren’t in China!
Massive International Banking Scandal Crushes Bank Stocks, JP Morgan, Deutsche Bank, HSBC Plunge On FinCEN Leak! - Must Video
Loading...
Top Alternative
The Mandela Effect: The Man From the 'Country' That Does Not Exist! Multiverses
Edgar Cayce: Strange Metals, Minerals and Stones... Their Magical Properties Were Noted by Cayce
The Great Conservative Migration & What it Means for the Future
Ghislaine Maxwell's Friends Predict She Will 'Sell Out' Bill Clinton as New Revelations Emerge!! - Must Video
Soros-Funded Coalition Plans to Unleash Election Day Chaos That Could Far Surpass Floyd Protests!
Biden Voters Riot, Commit Arson, Vandalism, And Attempted Murder
American Civil War Looms as Trump Reveals Intention to Ignore Voting Results
Fatally flawed COVID vaccine monkey business.
Only 2% of All People Can Hear This Mysterious Sound – and Nobody Knows Why (Video)
Civil War: The Left’s Revolution Playbook EXPOSED