“As long as I’m president of the United States, Iran will never be allowed to have a nuclear weapon.”

Trump added that the world community has tolerated Iran’s “destabilizing behavior” since 1979 (the year of the Iranian hostage crisis) and argued that through the killing of Soleimani, he is changing things:

“Soleimani’s hands were drenched in both American and Iranian blood. He should have been terminated long ago. By removing Soleimani, we have sent a powerful message to terrorists.”

Trump made it clear that US doesn’t need anything from Iran:

“We are independent and we do not need Middle East oil,”

Additionally, Trump jabbed the Obama administration, urging the United Kingdom, Germany and France to end their participation in the the Joint Comprehensive Plan of Action or JCPOA:

“The missiles fired at us” were paid for by the funds “made available by the last administration.”

While no further military actions were signaled:

“We do not seek escalation or war, but will defend ourselves against any aggression.”

But, noted that NATO will be engaged more…

“Today, I am going to ask NATO to become much more involved in the Middle East process,”

And finally, Trump noted that further sanctions will be invoked on Iran.

Trump ends on a grace note, calling for peace.

“To the people and leaders of Iran, we want you to have a future and a great future, one that you deserve. One of prosperity at home and harmony with the nations of the world. The United States is ready to embrace peace with all who seek it.”

President Trump will deliver a statement to the American people on Wednesday morning at 11 am est. about the Iranian missile strikes that targeted two U.S. military bases in Iraq on Tuesday night. 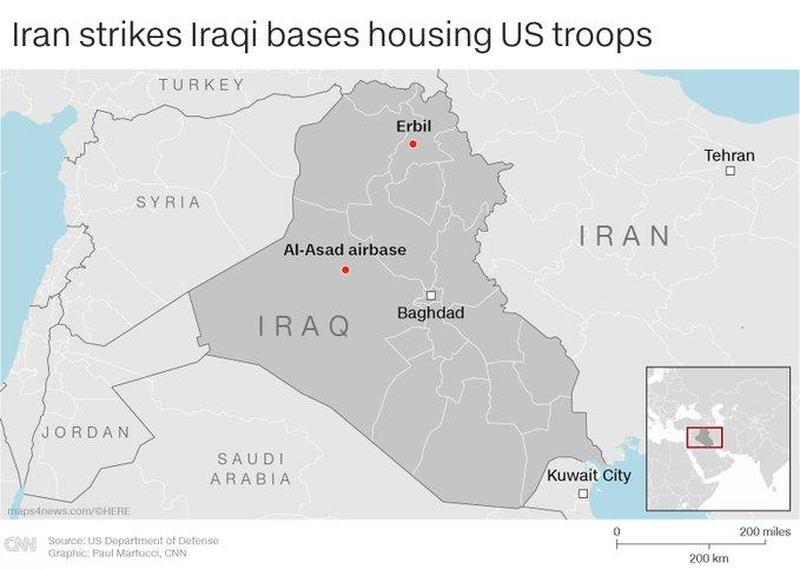 As a preview to Trump’s speech, Senior White House reporter for Bloomberg News Jennifer Jacobs tweeted Wednesday morning that there were “no American casualties from last night’s Iranian missile strikes that targeted two airbases in Iraq that host U.S. troops.”

BREAKING: There were no American casualties from last night’s Iranian missile strikes that targeted two airbases in Iraq that host U.S. troops, sources tell me.

President Trump is likely to give his remarks to the increasing tension in the Middle East after Iran attacked two U.S. military bases. He’s expected to provide the public with a Department of Defense’s assessment of no U.S. casualties after the attack.

President Trump tweeted late Tuesday that “All is well! Missiles launched from Iran at two military bases located in Iraq. Assessment of casualties & damages taking place now. So far, so good! We have the most powerful and well-equipped military anywhere in the world, by far! I will be making a statement tomorrow morning.”

All is well! Missiles launched from Iran at two military bases located in Iraq. Assessment of casualties & damages taking place now. So far, so good! We have the most powerful and well equipped military anywhere in the world, by far! I will be making a statement tomorrow morning.