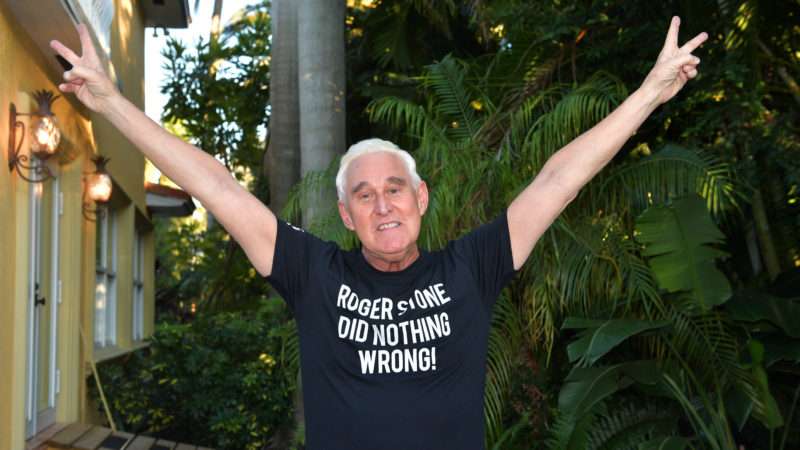 When Trump announced the commutation, Stone was days away from reporting to a federal prison in Jessup, Georgia, to serve 40 months behind bars. Stone’s allies had been lobbying Trump as Stone’s prison sentence approached, and Trump had hinted at the pardon in radio and TV interviews this week.

“Well, I’ll be looking at it,” Trump told reporters outside the White House Friday. “I think Roger Stone was very unfairly untreated, as were many people.”

The White House released a statement Friday night saying Stone was “a victim of the Russia Hoax that the Left and its allies in the media perpetuated for years in an attempt to undermine the Trump Presidency.”

“Mr. Stone was charged by the same prosecutors from the Mueller Investigation tasked with finding evidence of collusion with Russia,” the White House statement continues. “Because no such evidence exists, however, they could not charge him for any collusion-related crime.  Instead, they charged him for his conduct during their investigation. The simple fact is that if the Special Counsel had not been pursuing an absolutely baseless investigation, Mr. Stone would not be facing time in prison.”

The White House also cited the “egregious facts and circumstances surrounding his unfair prosecution, arrest, and trial,” such as the “spectacle” of Stone’s arrest by armed FBI agents, jury bias against Stone, and his advanced age, which puts him at risk of COVID-19 if he catches the virus in federal prison.

As with the Justice Department’s unprecedented attempt to dismiss charges against former national security adviser Michael Flynn after he pleaded guilty in open court to making false statements to the FBI, Stone’s pardon is a case of the Trump administration citing legitimate problems with the criminal justice system for nakedly cynical and self-serving ends. The Justice Department did not care about excessive sentencing or unfair prosecutions before. It does not care about them now, and it will not care about them when they’re used again to railroad defendants who aren’t Trump’s allies.

This isn’t the first time the Trump administration has stepped in to protect Stone. A federal grand jury indicted Stone last January on seven counts of obstruction of justice, false statements, and witness tampering stemming from Special Prosecutor Roger Mueller’s probe of Russian interference into the 2016 presidential election. Stone was convicted on all counts in November.

Federal prosecutors originally recommended a seven- to nine-year prison sentence for Stone, prompting Trump to fume on Twitter that this was “horrible and very unfair.” A day later, the Justice Department overrode the line prosecutors’ recommendations—an almost unheard of event—saying Stone deserved a far lighter sentence.

Stone’s lawyers tried to appeal his conviction, arguing the jury was politically biased against him. They also asked the court to delay sending Stone, 67, to federal prison because of the ongoing threat of COVID-19.

But U.S. District Judge Amy Berman Jackson rejected his appeal and his request for a two-month delay to the beginning of his prison sentence, instead granting him a two-week delay.

Stone got his start in politics in Richard Nixon’s infamous Committee for the Re-election of the President. From those auspicious beginnings, he carved out a career as a flamboyant campaign consultant, lobbyist, and “dirty trickster.” He got a tattoo of Nixon’s face on his back to complete the image.

Naturally, Stone gravitated toward Trump, whose tawdry brand of soap-opera politics and intrigue fit his style quite well. (“Politics with me isn’t theater. It’s performance art, sometimes for its own sake,” Stone told The Weekly Standard‘s Matt Labash in a definitive 2007 profile.)

After he resigned from Bob Dole’s 1996 presidential campaign—following a National Enquirer story reporting that he had placed ads in several publications for swingers—Stone was a casino lobbyist for Trump and advised his brief Reform Party presidential campaign in 2000.

Although Stone left Trump’s 2016 campaign under a cloud of recriminations and drama, he remained a staunch supporter of the president, and memorably showed up to the inauguration dressed like Snidely Whiplash, or perhaps the Babadook.

Success did not temper Stone’s passions. Once, on Twitter, he called former RNC chairman and White House chief of staff Reince Priebus “rancid penis.” Tragically, that tweet is now lost to the ether: Stone’s Twitter account was suspended in 2017, after he sent a series of profanity-laden messages to various CNN anchors. Judge Jackson later barred Stone from using social media, after he repeatedly violated a gag order during his trial.

The trial and Stone’s muzzling turned him into a martyr among hardcore Trump fans, complete with popular “Roger Stone did nothing wrong” t-shirts.

Stone was no more a martyr than any other defendant who finds him or herself in the crosshairs of federal prosecutors—all the less so because he couldn’t seem to figure out that federal investigators, prosecutors, juries, and judges don’t appreciate political performance art.

Lucky for him, his old business associate Trump is a master of the medium.

“Roger Stone has already suffered greatly,” the White House statement concludes. “He was treated very unfairly, as were many others in this case.  Roger Stone is now a free man!”

Loading...
"Not by might, nor by power, but by my spirit, saith the Lord of hosts." Zechariah 4:6
BEFORE IT'S NEWS ON TELEGRAM
GET THE TELEGRAM APP - https://telegram.org/ JOIN OUR CHANNEL - https://t.me/BeforeitsNews
Read it..
BEFORE IT'S NEWS
SIGN UP FOR OUR NEWSLETTER
Today's Top Stories
Jana | INL | FEMA Insider Intel (8/8/2020): Prepare Now — August Last Month to Physically Prepare — Sept-to-Dec Head's Up!
SHOCK! The list of arrests and executions of famous deep state
Ex-32° Freemason Jeremy (8/8/2020) — More Bombshell Information on What's Coming This Year — 'Information is Heavy, Mind Blowing'
Time Traveler Revelations, The Strange Story of John Titor from 2036
Greg Hunter: America Will Not Be Destroyed! – Bo Polny Video
What Whacked Jupiter’s Moon Ganymede? 150 Kilometer Asteroid Suspected
SGTreport: No Other President Would Dare Do This!
Nostradamus: The Biggest Event In History Is About to Occur, The 20 Year Presidential Curse, John Hogue
Cheap Spray-On Coating Makes Windows Smart Enough To Save Energy
Florida Gulf Stream Current Is Weaker Now Than at Any Point in the Past Century
Loading...
Featured
Mayor Lori Lightfoot Finally Admits Defeat! Refuses to Defund Police, Crime Goes Down! What a Surprise! - Great Video
New York City Councilman Thanks Trump for Raising Awareness About Hydroxychloroquine After Drug ‘Saved’ Him
The Rule of 3's to Survive Any Situation (Video)
The Truth About Super Soldiers in the Military, Special Forces & Clandestine Ops
Empty Wards and Empty Coffins
Question I Have Been Asked and Asked Myself: Should we FIGHT?
SECRET SOCIETIES UNMASKED! TRUTH REVEALED ON ILLUMINATI PLAN TO TAKE OVER THE EARTH! TIME IS RUNNING OUT
What the MSM Was Afraid to Tell You
10 Painfully Obvious Truths Everyone Forgets Too Soon
Dave Hodges: 45 Says America Is at the Last Stand! - Great Video
Loading...
Top Global
Empty Wards and Empty Coffins
The Human Hero
SECRET SOCIETIES UNMASKED! TRUTH REVEALED ON ILLUMINATI PLAN TO TAKE OVER THE EARTH! TIME IS RUNNING OUT
The Sunday Essay: Age Is Just a Number, but Birth Year Is a Guide to Attitude
DoD Engineer on Beirut Explosion Compared to a Nuclear or MOAB Bomb via Lee Wheelbarger
Listen to This!!!! Bill Gates Is More Dangerous Than Coronavirus Itself
Nostradamus: The Biggest Event In History Is About to Occur, The 20 Year Presidential Curse, John Hogue
Why the Coronavirus Hoax is a Hoax (leaflet to print out and distribute)
Bill Gates outed even by NBC, Elites show contempt for the common man, mock their own rules: Links 2, August 8, 2020
Deborah Tavares: DEWs & Rothschild's Plan for Global Genocide
Loading...
Top Alternative
Divine Judgment? 14 Days Before the Republican Convention in State – North Carolina Stuck by Hurricane and Earthquake
We Covered Half the Garden With Wood Chips and This Happened
Hey Bezos, Musk, and Soros, Since You Like Socialism so Much, Bernie Wants to Give it to You Good and Hard!
Mandatory Masking and the ADA
There Is No Such Thing as Black Supremacy
The Human Hero
Professor: Anyone Still Voting Republican Is “Xenophobic and Racist”
Have ‘We the People’ already won, and Q’s ‘Show’ a scripted performance to wake the sheeple to at least 50%-50% by 2020 election? 13-minute intro + 98-minute documentation: I can’t refute this explanation; can you???
The Brainwashing Worked: Poll Finds 72% of Americans Support Fines, Jail Time for People Who Refuse Masks! +Video
A Must Read! "It's Time To Position For The Endgame"