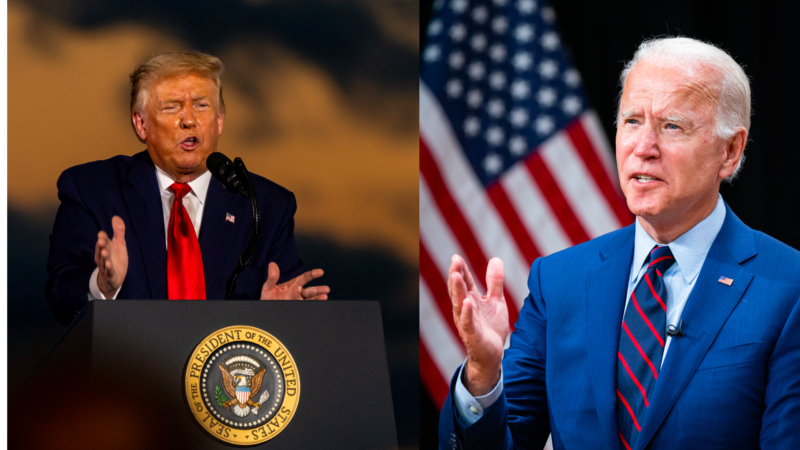 Admittedly, comparing the tax and spending proposals of the legacy-party presidential candidates seems a bit pointless in 2020. This isn’t an election waged over policy; it’s a grudge match between two tribes of mutually loathing partisan drones with incumbent President Donald Trump serving as the living totem of all they respectively love or loathe—cults of personality and anti-personality.

That said, there are differences between what Republican Trump and Democrat Joe Biden threaten to inflict on us in terms of raising revenue and how to spend it. The details are hard to nail down—probably deliberately so on the part of the campaigns—but Trump essentially promises tax cuts (and penalties for those who cross him) while spending too much, and Biden intends to raise taxes while ignoring the idea that spending must be constrained in any way.

When it comes to taxes, Trump continues the Republican Party’s traditional interest in reducing the government’s take.

“Without further details or clarification, it is difficult to fully analyze President Trump’s second term tax policy agenda,” Erica York noted last week for the Tax Foundation. “Broad themes of the president’s agenda include providing tax relief to individuals and tax credits to businesses that engage in desired activities.”

The exception is on the matter of tariffs, given that the president has wandered from his party’s long-time support of free trade.

“In his first term, President Trump has imposed more than $80 billion of tax increases in the form of tariffs,” adds York. “Recently, the president said he would impose tariffs on companies that do not move jobs back to the United States from overseas. Whether this is a formal policy proposal is unclear, but it indicates the possibility of continued tariffs if Trump wins reelection.”

Biden, too, fulfills the role you would expect of his party affiliation as a Democrat.

“Biden has not released a single formal tax plan, but he has proposed many tax changes and increases connected to spending proposals related to issues like climate change, infrastructure, health care, education, and research & development,” Garrett Watson and Erica York wrote for the Tax Foundation. “Most of these proposals center around raising income taxes on high earners as well as on businesses.”

With a little more detail to analyze, Watson and York “estimate that Biden’s tax proposals would raise about $3.8 trillion over 10 years. The plan would also reduce long-run economic growth by 1.51 percent and eliminate about 585,000 full-time equivalent jobs.”

Whether or not a government is taxing too little, enough, or too much is relative to how much it plans to spend and how much ruckus taxpayers kick up in response to the legalized mugging. For both legacy-party candidates, lots of spending well beyond the government’s means is part of the plan.

In Trump’s case, we know he isn’t shy about cutting checks. “Under Trump’s signature, before any true crisis hit, the annual price tag of government went up by $937 billion in less than four years,” Reason‘s Matt Welch recently wrote.

For his 2021 budget (a theoretical document, since the federal government has given up on formal budgets), President Trump proposed continuously increasing federal spending, though slower growth than was originally forecast.

“The federal deficit would be $2.1 trillion smaller under the President’s budget than in CBO’s baseline over the 2021–2030 period,” the Congressional Budget Office (CBO) projected earlier this year. That certainly sounds like an improvement, but the budget consistently spends more than the government collects to leave the country with a cumulative $11 trillion deficit instead of the baseline anticipated $13 trillion deficit.

Then again, that seems almost realistic when compared to what Trump’s main rival, Joe Biden, plans in terms of increased expenditures and benefits.

“From a variety of sources—campaign releases, independent analyses, media stories and the Congressional Budget Office—I have constructed a rough estimate of what it would cost to cover all the new benefits,” The Washington Post‘s Robert Samuelson recently tallied. “The additional 10-year spending totals $7.74 trillion.”

“But wait, we’re not finished yet,” wrote Samuelson. “To these costs ought to be added the projected budget deficits under existing policies. For the period from 2021 to 2030, CBO figures that’s another $13 trillion. The grand total comes to $20.7 trillion (the $13 trillion, plus the $7.7 trillion).”

I should add here that the CBO recently admitted that it “has tended to overestimate revenues in its projections—especially those that extend further into the future.” That means we should expect deficits to be higher than all of this number-crunching predicts, with larger debt to result.

And all of this is before we take into account the damage wrought by the pandemic and by government-imposed lockdowns.

Economic activity “appeared to have declined at a historically rapid rate in the second quarter,” the Federal Reserve conceded in July, adding that “the pace of declines in the unemployment rate, over the second half of this year were expected to be somewhat less robust than in the previous forecast.”

A smaller, struggling economy in which people are scrambling to rebuild businesses, jobs, and wealth isn’t going to surrender as much revenue as government types would like. It’s also likely to be more vulnerable than a thriving economy to burdensome taxes and tariffs.

But perhaps I’m reading too much into ambitious-yet-vague promises of tax reductions and grandiose vows to fund everything under the sun. Nobody is really expected to shift their votes based on these schemes. Instead, this election is about flag-waving as Team Red and Team Blue rally the faithful and prepare for electoral combat—or literal combat, given the country’s recent direction. The specifics of campaign promises are beside the point.

Whoever wins the presidency—realistically, either Biden or Trump—we’re in for big, unaffordable government. How much bigger and how unaffordable are the only real questions.