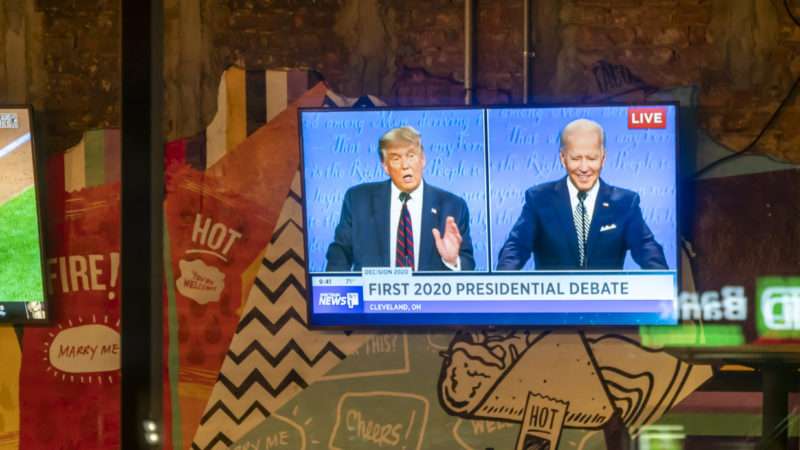 The first debate between President Donald Trump and former vice president Joe Biden was, for the most part, an unwatchable disaster.

We should have more debates between these two men. A lot more.

In the rare moments on Tuesday night when Trump and Biden weren’t talking over each other or engaging in shouting matches with the debate’s moderator, Chris Wallace of Fox News, they struggled to move behind the most basic of talking points before quickly returning to the shouting, mocking, and general nonsense. Trump was, of course, the more disruptive of the two—but both candidates deserve blame for wasting 90 minutes of everyone’s time.

“A hot mess inside a dumpster fire inside a train wreck,” is how CNN’s Jake Tapper described it shortly after the event mercifully concluded. His colleague Wolf Blitzer actually opened CNN’s post-debate coverage by openly speculating about whether this might have been both the first and last debate between the two men—and he wasn’t the only one to express that sentiment:

CANCEL THE REMAINING PRESIDENTIAL DEBATES. It is impossible to have an orderly, productive exchange with Donald Trump. Stop pretending otherwise. #Debate2020

.@morningmika makes a compelling case to cancel the rest of the debates here https://t.co/0GWDbYw9M3

“Tuesday was the first presidential debate of the 2020 election, and if there is any sense or mercy left in this nation, it will be the last, too,” writes @GrahamDavidA: https://t.co/iCdEpIfkhf

Anyone who watched Tuesday’s debate with the knowledge that two more Trump vs. Biden contests are scheduled—for October 15 and October 22—can be forgiven for wishing that this cup might pass from us. I mean, can you really imagine sitting through three more hours of that.

But what America really needs is the exact opposite.

Yes, I’m saying there should be more debates. Maybe two or three per week between now and the election. Seriously. The debates shouldn’t be seen as horrifying divertissements from more sanitized campaign trail news, and they certainly shouldn’t be canceled because they show Trump and Biden in such a raw, unfiltered light. This is the choice we have, America, and we should not look away.

There should be more debates because the two major parties that vomited up these candidates into your living room deserve to be humiliated. Take away the pundits, surrogates, and teams of public relations professionals who help sell Trump and Biden as normal, competent adults capable of holding any position of power, and you’re left with what you saw on Tuesday night.

There should be more debates because Americans should have to stew in this porridge of hot garbage until they cry out for alternatives—alternatives that are kept off the stage by rigged qualification rules set by the Commission on Presidential Debates, which is itself a creation of the two major parties. (After watching Tuesday’s display, you can at least understand why Democrats and Republicans are so keen on excluding anyone who might be even moderately coherent.)

There should be more debates because Americans need to confront the fact that Trump and Biden didn’t merely have an “off night” on Tuesday. Their performances were every bit as calculated and cynical as they were unserious and exhausting. They were, believe it or not, trying their best.

Trump lacks coherent policy ideas or anything that could reasonably be called a second-term agenda. Midway through the debate, Wallace lobbed a softball that invited Trump to talk about what he would do to help the average American if given another four years in office, and Trump sputtered a bunch of nonsense about what he’d supposedly accomplished so far—as if voters owe him a second term based on his first.

Lacking any serious ideas of his own, it was clear from the start that Trump’s strategy in the debate was nothing more sophisticated than trying to bully Biden into saying something that could be replayed, context-free, on Fox News and the president’s own Twitter account.

Biden, whose best quality during this whole campaign has been that he’s not Trump, kept his cool but accomplished little else. Honestly, I don’t remember a word Biden said last night except for the time he told Trump “would you shut up, man.” Which, fair.

So much for trying to figure out which candidate you’d rather have a beer with. Last night’s debate posed a darker question: if you were locked in a bar with both candidates and a pistol with a single round, would you take the easy way out?

Guess what, America: There is no easy way out. Either Trump or Biden will be president for the next four years. We collectively stared into that abyss for 90 minutes on Tuesday night, and the only ones among us who weren’t driven mad by the experience were those who are already insane.

There should be more debates for roughly the same reason that we should abolish tax withholding. Though originally a well-intentioned idea pushed by none other than Milton Friedman, having taxes automatically withheld from paychecks means that most Americans don’t experience the reality of paying roughly one-third of what they earn to the federal government every year. If we could only force people to write massive checks to the IRS every year, the theory goes, more people would feel differently about proposals to increase the size and cost of government. Likewise, if only we had more presidential debates, perhaps we could awaken more of America to the ruinous consequences of having only two viable political parties in a country of 325 million people.

Every time Biden and Trump speak, they undermine the rotting system that put them in front of the cameras, so they should be invited to speak, literally ad nauseum, until we can’t take it anymore.