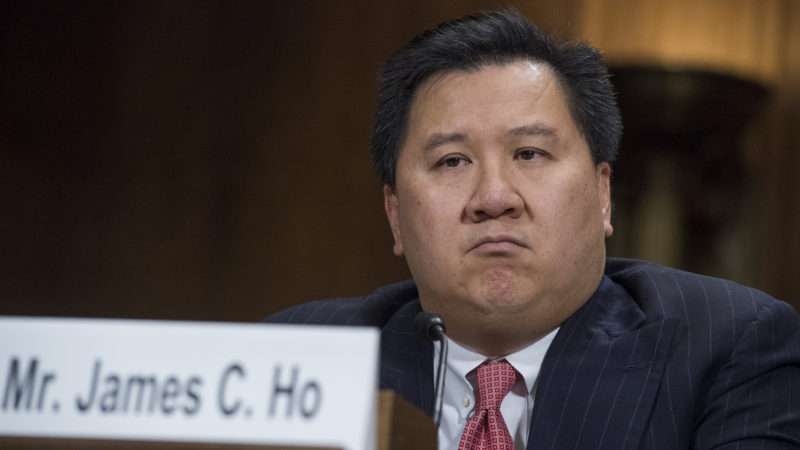 Of the 10 sitting judges on President Donald Trump’s new list of 20 potential Supreme Court nominees, James Ho may have the most interesting track record. Ho, who replaced Texas Sen. Ted Cruz (who also made the list) as that state’s solicitor general in 2008 and joined the U.S. Court of Appeals for the 5th Circuit in 2018, is a mixed bag from a libertarian perspective, combining robust respect for the right to armed self-defense and freedom of speech with a troubling deference to police accused of abusing their powers.

As Damon Root noted before Trump nominated Ho for the 5th Circuit in 2017, Ho wrote a 2006 law journal article rebutting the claim that birthright citizenship can be restricted or repealed by statute. Ho, a naturalized U.S. citizen who was born in Taiwan, argued that anyone born in the United States, including children of unauthorized residents, is American by birth under the original understanding of the 14th Amendment. A constitutional amendment, he concluded, is “the only way to restrict birthright citizenship.” That position, Root noted, “is directly at odds with the stated views of Donald Trump.”

Months after joining the appeals court, Ho was already attracting criticism for injecting policy commentary into his opinions. University of Southern California law professor Orin Kerr, a Volokh Conspiracy blogger, said a passage from a 2018 Ho dissent in a case involving limits on campaign contributions “reads like a politician’s op-ed, not a legal opinion” and should have been excised because “judges should stick to the law.” The blog’s co-founder, UCLA law professor Eugene Volokh, was more forgiving, saying “what we’re seeing from Judge Ho is a judge who, because he’s really interested in law and ideas, wants to write more about the bigger picture.”

Whatever your take on that controversy, Ho’s comments about campaign finance regulations were strikingly libertarian. “Many Americans of good faith bemoan the amount of money spent on campaign contributions and political speech,” he wrote. “But if you don’t like big money in politics, then you should oppose big government in our lives. Because the former is a necessary consequence of the latter. When government grows larger, when regulators pick more and more economic winners and losers, participation in the political process ceases to be merely a citizen’s
prerogative—it becomes a human necessity. This is the inevitable result of a
government that would be unrecognizable to our Founders.”

Another controversial Ho dissent, in a 2018 case involving federal restrictions on interstate gun sales, likewise should resonate with libertarians. “The Second Amendment guarantees the right of the people to keep and bear arms,” Ho wrote. “For decades, the Supreme Court has referred to the Second Amendment as a fundamental civil right, comparable to other provisions of the Bill of Rights….Yet the Second Amendment continues to be treated as a ‘second-class’ right—as at least three Justices have noted in recent years.”

Unlike Ho’s comments about restrictions on campaign contributions, that observation falls squarely within the judicial role of enforcing the Constitution, although it might offend gun control advocates. By contrast, Ho’s comments about abortion in a 2018 concurrence went beyond the issue before the court.

The case involved a challenge to a Texas law that requires burial or cremation of “fetal remains.” The appeal challenged a subpoena requiring the Texas Conference of Catholic Bishops (TCCB), which was not a litigant, to produce internal emails and other private records within 24 hours. “The district court discounted the burdens of production on TCCB and failed to require more than a minimal, if any, rationale for discovery of TCCB’s internal communications,” a unanimous three-judge panel concluded. “The court was too quick to reject TCCB’s privilege claims. By acting in unnecessary haste, the court deprived TCCB of a fair opportunity to make its case for quashing the discovery.”

Ho went considerably further in his concurring opinion. “The First Amendment expressly guarantees the free exercise of religion—including the right of the Bishops to express their profound objection to the moral tragedy of abortion, by offering free burial services for fetal remains,” he wrote. “By contrast, nothing in the text or original understanding of the Constitution prevents a state from requiring the proper burial of fetal remains.” Ho suggested that the subpoena was partly motivated by the desire to “retaliate against people of faith for not only believing in the sanctity of life—but also for wanting to do something about it.”

A 2019 Ho dissent likewise illustrates a tendency to offer opinions that stray beyond the questions presented. “If we want to stop mass shootings,” he declared in the opening line, “we should stop punishing police officers who put their lives on the line to prevent them.” The context of that remark makes Ho’s attitude especially troubling.

The case involved a 2013 fatal shooting in which police seem to have mistaken a 25-year-old mentally handicapped man on a bicycle for a suspect who had been destroying mailboxes, making threats, and firing a gun. When Kaufman County, Texas, sheriff’s deputies arrived at the scene, the suspect—uniformly identified by witnesses and police as a black man wearing a brown shirt who was on foot—took a shot at them before ducking out of sight. When Gabriel Winzer, a black man in a blue shirt (or possibly a blue jacket—the accounts in the district court decision and the 5th Circuit ruling differ on that detail) appeared on a bicycle, the deputies killed him, claiming that he had aimed a pistol at them.

U.S. District Judge David Godbey dismissed the civil rights lawsuit filed by Winzer’s family against the officers involved in the shooting. Among other things, he concluded that Officer Matthew Hinds was protected by qualified immunity, a doctrine that limits such claims to cases where police are accused of violating “clearly established” rights. Because Hinds had “probable cause” to believe that Winzer “posed a threat of serious bodily harm,” Godbey said, his use of deadly force was “objectively reasonable” in the circumstances.

Deeming that conclusion premature, a three-judge panel of the 5th Circuit sent the case back to the district court. “We conclude that a jury could find that the use of deadly force was unreasonable if it credited and drew reasonable inferences from the Winzers’ account,” the panel majority said. When the full court declined to rehear the case, Ho wrote a dissent that accepted the police version of events at face value and dismissed the countervailing evidence.

Winzer’s father said his son wanted to show the cops his orange cap gun, which he took with him on his bicycle. But according to this account, Winzer was not holding the toy in his hand and never raised his arm or made any threatening gestures. That affidavit, combined with the fact that Winzer did not resemble the suspect and the fact that police never found an actual gun, strongly suggests that they shot the wrong man, as the 5th Circuit panel concluded.

“The person on the bicycle was Gabriel Winzer, and not the suspect who had fired at Hinds and [Officer Gerardo] Hinojosa,” the panel said. “Appellants’ summary judgment evidence indicates that at the time of this shooting, Gabriel Winzer, the decedent, was inside his father’s house and did not fire this shot at the officers.”

Dissenting from the decision against rehearing the case, Ho did not just argue that Hinds reasonably feared his life was in danger when he saw Winzer. He also asserted that Winzer was the man who had fired at the deputies after all. “The panel majority suggests that Winzer might not have been the suspect,” Ho wrote (in fact, the panel majority flatly stated as much). “But as the district court noted, a forensic report later detected the presence of gunshot residue on Winzer’s body.”

Ho did not mention a possibility raised by a law enforcement expert who testified for the plaintiffs: The residue could have been transferred from the officers (who had just fired their guns) as they handcuffed a mortally wounded Winzer. If the case were allowed to proceed, that issue could be assessed by a jury. Likewise the conflicting accounts of the shooting and the difference between Winzer’s appearance and the suspect’s description. At this stage of the case, courts are supposed to assess the evidence in the light most favorable to the plaintiffs, which Godbey and Ho conspicuously failed to do.

“It is unknown how many lives were saved by these deputies on April 27, 2013,” Ho wrote, although the answer might well be less than zero, since the cops killed a man who apparently posed no real threat. “What is known, however, is that Kaufman County will now stand trial for their potentially life-saving actions—and that its taxpayers, including those who will forever be traumatized by Winzer’s acts of terror, will pick up the tab for any judgment. I have deep concerns about the message this decision, and others like it, sends to the men and women who swear an oath to protect our lives and communities. For make no mistake, that message is this: See something, do nothing.”

Ho’s credulous acceptance of the police account, combined with his warning that allowing a jury to assess their conduct would jeopardize public safety, reflects a mindset similar to Donald Trump’s uncritical “defend the police” stance. By contrast, Neil Gorsuch, Trump’s first Supreme Court nominee, has been notably alert to the dangers of reflexively deferring to law enforcement.

Assuming Trump gets another chance to pick a justice, we would be lucky to get someone like Gorsuch. But we probably will have to settle for someone more like Ho.