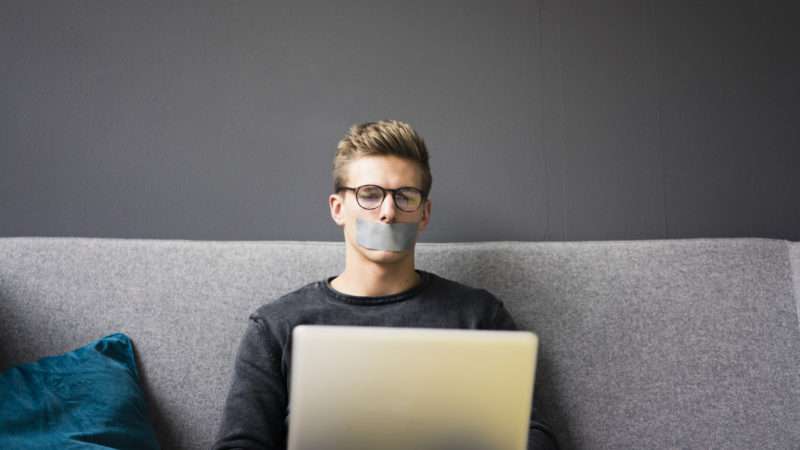 Even as the world wrestles with a pandemic and overbearing public health measures, some legislative bodies are taking the opportunity to tighten the screws on speech they don’t like. Several bills have passed, others are pending, and one was gutted by court review, but all represent new fronts in government efforts to impose censorship.

For free speech advocates, the luckiest break might have been the fate of a law passed by the French National Assembly in May. While existing requirements give companies 24 hours to take down content alleged by the government to glorify terrorist activity or to constitute child pornography, the new law would have changed that to one hour. In addition, online publishers would have been allowed a day to remove so-called “hate speech.”

“The same 24-hour obligation would have applied to content reported for violation of a law that criminalizes speech that promotes, glorifies, or engages in justification of sexual violence, war crimes, crimes against humanity, enslavement, or collaboration with the enemy; a law that criminalizes sexual harassment; and a law that bans pornography where it could be seen by a minor—among others,” reports Jacob Schulz at Lawfare. “The law did not carve out any exceptions; the 24-hour rule would have applied even in the case of technical difficulties or temporary surge in notifications.”

In June, France’s Constitutional Court struck down the vast majority of the law as an unconstitutional threat to freedom of expression. That’s really the only good news to report so far.

“Germany’s Network Enforcement Law, or NetzDG … requires social media companies to block or remove content that violates one of twenty restrictions on hate and defamatory speech in the German Criminal Code,” Diana Lee wrote for Yale Law School’s Media Freedom and Information Access Clinic. “In effect, the NetzDG conscripts social media companies into governmental service as content regulators,” with millions of euros in fines hanging over their heads if they guess wrong.

That model of delegated censorship has proven to be as infectious as a viral outbreak, taking hold in over a dozen other countries.

“This raises the question of whether Europe’s most influential democracy has contributed to the further erosion of global Internet freedom by developing and legitimizing a prototype of online censorship by proxy that can readily be adapted to serve the ends of authoritarian states,” Justitia, a Danish judicial thinktank, warned in a 2019 report.

It’s no surprise when countries like Russia, Turkey, and Venezuela emulate intrusive legislation from elsewhere—they don’t need much encouragement. But we’ve already seen that French legislators followed in Germany’s lead, and lawmakers in the U.K. are poised to do the same.

“In the wrong hands the internet can be used to spread terrorist and other illegal or harmful content, undermine civil discourse, and abuse or bully other people,” fretted a 2019 British government paper on “online harms.” The paper specifically cited NetzDG as a potential legislative model.

Their proposals “introduce a new concept into law—’legal but harmful’ for online speech,” cautions Ruth Smeeth of Index on Censorship. “It’s conflating what is already illegal, such as incitement and threat, with speech which we may disagree with, but in a free society is, and should be, legal.”

Austria is also considering a NetzDG-inspired law that would require the removal of “content whose ‘illegality is already evident to a legal layperson’” explains Martin J. Riedl, a native Austrian and Ph.D. student at the University of Texas at Austin’s School of Journalism and Media. The law would further encourage compliance by “forbidding their debtors (e.g., businesses who advertise on platforms) to pay what they owe to platforms” that don’t conform to the law.

That’s expected to encourage even more “overblocking” by platforms worried that they’ll face a financial death penalty if they guess wrong as to content’s legal status.

Still, Austrians may not be able to out-flank their role models. Germany this summer moved to make NetzDG even more restrictive by adding mandatory “hate speech” reporting requirements.

Brazilian lawmakers, too, are considering legislation that started as NetzDG-inspired before morphing into a campaign against so-called “fake news” (because, apparently, any excuse for controlling speech is a good excuse when you work in government).

“It is vague on the matter of what’s considered fake news, which it describes as false or deceptive content shared with the potential to cause individual or collective harm,” wrote Brazilian journalist Raphael Tsavkko Garcia for the MIT Technology Review. “This ambiguity leaves it to the state to decide what kind of content is considered false or potentially harmful, and could allow those in power to manipulate the definition for political gain.”

The U.S. faces its own speech- and privacy-threatening legislation in the form of the Eliminating Abusive and Rampant Neglect of Interactive Technologies (EARN IT) Act of 2020. The legislation, which was introduced in the House of Representatives last month, invokes children and the dangers of child pornography on its way to threatening platforms with the loss of Section 230 protection against liability for content posted by users if they don’t adopt government-dictated “best practices.”

“The EARN IT bill would allow small website owners to be sued or prosecuted under state laws, as long as the prosecution or lawsuit somehow related to crimes against children,” warns the Electronic Frontier Foundation. “We know how websites will react to this. Once they face prosecution or lawsuits based on other peoples’ speech, they’ll monitor their users, and censor or shut down discussion forums.”

This world-wide wave of censorship legislation piggy-backs on pandemic-related concerns about the quality of information and the safety of communications available to people confined to their homes. It has sometimes been passed by legislatures empowered by health-related states of emergency. Yet again, a crisis eases the way for governments to accumulate powers that would face greater resistance in happier times.

“Governments around the world must take action to protect and promote freedom of expression during the COVID-19 pandemic, which many States have exploited to crack down on journalism and silence criticism,” the United Nations Special Rapporteur on Freedom of Expression warned in July.

That timely heads-up is hampered only by the fact that governments are well aware of the situation—and consider it a feature, not a bug.