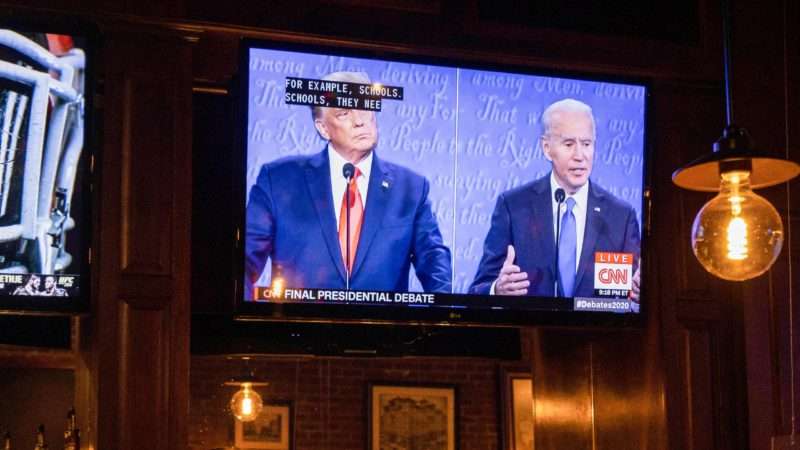 During the climate change segment of the presidential candidate debate last night, President Donald Trump goaded his opponent former Vice-President Joe Biden with the question,”Would you close down the oil industry?” Biden responded, “I would transition from the oil industry. Yes.” Trump immediately interrupted crowing, “That’s a big statement.” Biden agreed that it was a “big statement,” and added, “Well if you let me finish the statement, because it has to be replaced by renewable energy over time, over time, and I’d stopped giving to the oil industry, I’d stop giving them federal subsidies.”

When given a chance by the moderator to respond, Biden declared, “He takes everything out of context, but the point is, look, we have to move toward net zero emissions. The first place to do that by the year 2035 is in energy production, by 2050 totally.”

In this case, Biden was essentially summarizing his plan to respond to man-made climate change by phasing out the use of fossil fuels to produce electricity in the U.S. by 2035 followed by a complete transition to non-carbon dioxide emitting energy sources by 2050. Concerned that voters would be alarmed by Trump’s insinuation that Biden intends to “destroy” the oil industry imminently the Democratic presidential candidate later that night told reporters, “We’re getting rid of the subsidies for fossil fuels, but we’re not getting rid of fossil fuels for a long time.”

Getting rid of government subsidies is always a worthy project, but just how much money is supposedly being lavished on the oil industry? An August policy brief by the Breakthrough Institute* trenchantly observes that “ending fossil fuel subsidies won’t end fossil fuels.” Citing an estimate from the Resources for the Future think tank, the policy brief notes “that the federal government subsidizes fossil fuel extraction to the tune of about $4.9 billion a year. That’s not chump change, but compared to fossil industry revenues of $180 billion, it hardly seems essential to fossil energy operations.”

Besides the oil transition kerfuffle, President Trump asserted again that a Biden administration would ban fracking as a method to produce natural gas and oil. In fact, Biden has made confusing public remarks about his intentions with respect to fracking, but his official campaign position has consistently been that his administration would not ban fracking on private land, but would ban new fracking on federal lands.

During the debate, Biden did say, “What I will do with fracking over time is make sure that we can capture the emissions from the fracking.” In other words, a Biden administration would seek to re-impose Obama-era regulations that aimed to limit that amount of the potent greenhouse gas methane leaking into the atmosphere from gas and oil wells. The costs of implementing such regulations would likely put a number of smaller oil and natural gas production companies out of business.

President Trump entirely ignored the moderator’s question about how relaxing regulations on pollutants from refineries and chemical plants is harming the health poor people who live next door to such facilities. Instead he asserted, “The families that we’re talking about are employed heavily and they are making a lot of money, more money than they’ve ever made.” He went on to claim that he had saved the oil industry “when oil was crashing because of the pandemic.” How? “Say what you want of that relationship, we got Saudi Arabia, Mexico and Russia to cut back, way back. We saved our oil industry and now it’s very vibrant and everybody has very inexpensive gasoline,” he claimed.

What about Trump’s claim that he saved America’s oil industry? Just prior to the COVID-19 pandemic, the price of oil averaged around $50 per barrel. In the wake of global lockdown in April the price briefly collapsed to below $20 per barrel. That month Trump apparently threatened to withdraw American troops from the kingdom unless the Saudis cut back on their oil production. Shortly thereafter Saudi Arabia, Russia and other producers announced they were reducing their overall production by 10 percent.

The goal of cutting production is, of course, to boost oil prices which in turn leads to consumers paying more for a gallon of gasoline at filling stations. And so it has. In February, just before the lockdown the average price was $2.53 for a gallon. This fell to $1.94 in April but has since rebounded to $2.27 per gallon. The drop from nearly 800 operating oil and gas rigs at the beginning of year to the lowest number ever of just 250 today suggests that Trump’s characterization that the industry is “very vibrant” is exaggerated.

Biden’s garbled responses to Trump’s goading may have given the Republican candidate’s campaign a soundbite to wield against the former vice-president in the last two weeks of the presidential contest. But Biden’s  ”big statement” merely reiterates, for good or ill, the goals of his 30-year climate change plan. Ultimately, the Democratic candidate acknowledged reality when he observed that “we’re not getting rid of fossil fuels for a long time.”

*Disclosure: The Breakthrough Institute has paid my travel expenses to participate in several of its conferences over the past couple of years.

Loading...
"Not by might, nor by power, but by my spirit, saith the Lord of hosts." Zechariah 4:6
BEFORE IT'S NEWS ON TELEGRAM
GET THE TELEGRAM APP - https://telegram.org/ JOIN OUR CHANNEL - https://t.me/BeforeitsNews
Read it..
BEFORE IT'S NEWS
SIGN UP FOR OUR NEWSLETTER
Today's Top Stories
Tucker Listen Closely! Sidney Powell Just Revealed Why She's Not Yet Publicly Releasing Her Evidence! - Must Video
Meet Sidney Powell's Expert That Tucker Wouldn't Interview-But I Do! [Flynn/Giuliani/Sharpiegate]
X22Report: Trump Dangles The Bait, GSA, Deep State Takes The Bait, Truth Transparency The Only Way Forward! - Must Video
Not So Fast! Trump’s Mega Midnight Reversal And Tucker’s Shocking 180 The Bombshell Overnight Election Plot Twists!
Must See New Intel! This Tech-Giant Insider's BOMBSHELL INTEL Blows The Dems' Election Fraud Wide Open!
Overstock.com Founder Patrick Byrne Says Two Top Level Republicans Involved In The Election Rigging
Millions In America Making a “Run For It!” Mass Exodus Happening & Here’s Why…What Do They Know?
You Better Pay Attention To This! - Max Igan Must Video!
Trump Scores Huge Wins in MI & PA as Feckless Republicans Certify Fraudulent Votes! - Dr. Steve Turley Must Video
Robert David Steele: Sidney Powell - Lin Wood - Satanic Ritual Abuse Pedophilia Adrenochrome Child Torture UK
Loading...
Featured
Revelations: The World Is Burning and Nobody Cares, Deep State Will Win
Here's Why America Is the Land of Illusion and Where We're Headed
New Mexico Governor Shuts Down (Some) Grocery Stores for Two Weeks
Dominion Arrests Are Key to Supreme Court Ruling! Trump Will Prevail if He Doesn't Give up Under Death Threats to His Team(s) - Transition Approval Under Duress! - Capt. Dave Bertrand, Ret. +Videos
They Are Developing A “Digital Passport” For International Travel That Will Show If You Have Been Vaccinated
Donald Trump prophecy: The unbelievable link President Trump has to the Bible exposed
The Dow Just Hit 30,000, But Meanwhile The Real Economy Is Having A Meltdown
Sidney Powell Lifts the Lid on Deep State
X22Report: Trump Dangles The Bait, GSA, Deep State Takes The Bait, Truth Transparency The Only Way Forward! - Must Video
COVID Is Not the Threat! - Dr. Paul Craig Roberts
Loading...
Top Global
All The World's A Stage And All The ActWhores Are Playing Their Part! Great Video By Dollar Vigilante!
Why has Japan not had a pandemic…?
Exposing The Satanic Empire (Illuminati) And The Vatican - Full Documentary By Keith Thompson! Excellent Video!
The Real Mafia That Controls The Entire World And Soon The New World Order And Soon You If You Take The Covid RFID Vaccine!! Excellent Video. Must See!!
COVID 19: not so much a pandemic as a Trojan Horse
Say Goodbye To International Travel - TheCrowhouse
Intel Inside Sources Say President Trump Will Remain in Office via Israeli News Live
Strange Creature Scared These Kids in England. What is it?
Pfizer Claims Vaccine Is 90% Effective. Del Bigtree Has Found Some Shocking Information In The Fine Print. UK Expects ‘High Volume’ Of Covid Vaccine Adverse Reactions Death Wave! Great Videos!
Proof Covid Was Planned Years Ago !! Covid-19 To Be Diagnosed Using A.I. (Artificial Intelligence) According To 2015 Patent Application. Great Video!!
Loading...
Top Alternative
Antifa Issues Public Threat Against Trump Voters - Sent to President Trump!
The Covid “Pandemic”: Destroying People’s Lives! Engineered Economic Depression! Global “Coup d’Etat”? +Videos
All The World's A Stage And All The ActWhores Are Playing Their Part! Great Video By Dollar Vigilante!
Mysterious Metal Monolith Found in Utah - Live Coverage
Whistleblowers Speak Out... The Plan For Disclosure Has Started!
Trump's Next Move! A Machiavellian Playbook...
Attorney Lin Wood: Deep State Will Be Defeated! - Must Video
5 Tips for Holiday Shopping in an Unusual Year
The Book Of Enoch Manuscripts - Coast to Coast AM - November 2020
Mind Blowing Encounters You Should Watch With The Lights On