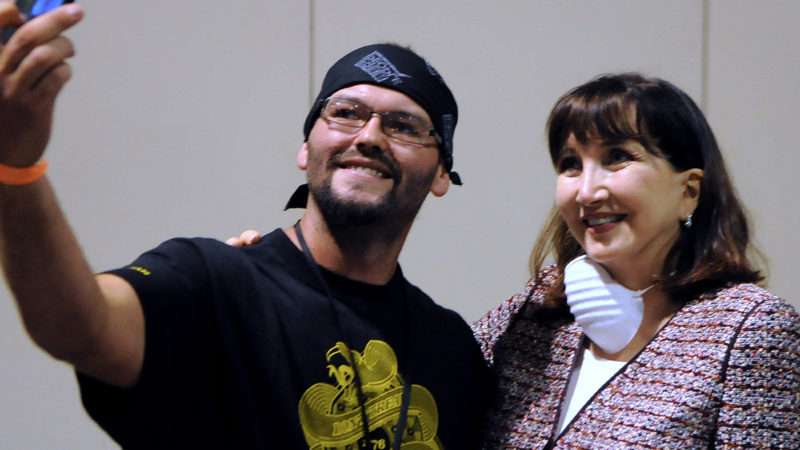 As the Libertarian Party has established itself as the most electorally successful third party in the United States, voters have grown accustomed to the group’s radical messaging against taxation, prohibition and war. One of the party’s top 10 presidential primary finishers in 2020, after all, had his name legally changed to “Taxation Is Theft.”

Less broadly known, though on full display in a streamed interview I conducted last night with presidential nominee Jo Jorgensen, is the party’s antipathy toward international institutions, pandemic restrictions, and vaccine mandates.

Jorgensen last night volunteered the latter as an example of the type of “personal decision” best left to individuals, rather than determined via the political process. So I asked her whether, philosophically, she considered it wise for public schools to require children be vaccinated as a condition for enrollment.

“I think it is immoral,” she responded. Then, after noting that she personally has chosen to vaccinate her family, Jorgensen contrasted vaccination policy with the types of prohibitions Libertarians have long opposed—on drugs, gambling, vaping, consensual sex transactions, and so on.

“All of these are laws that the government is telling you what not to do,” she said. “Vaccinations, on the other hand—we’re talking about somebody forcibly putting a substance into your body. I am just shocked that that’s even a question in our country that is supposed to be free. And even though I have chosen vaccinations, and I’ve chosen vaccinations for my children, I would never use the excuse of herd immunity to force other people to put something into their bodies that they don’t want to.”

This is not a majority opinion—82 percent of American adults favored school-based vaccines in 2016, according to Pew Research. But Libertarians are hardly a majority party (Jorgensen is polling at around 2 percent nationally), and old movement hands can tell you how outnumbered the party used to be on positions such as legalizing marijuana.

Still, the vaccine mandate issue divides libertarians, too, as illustrated by Reason‘s 2014 debate “Should Vaccines Be Mandatory?” Meanwhile, the COVID-19 pandemic has not only put such once-esoteric philosophical discussions on the political front-burner; it has given what many Libertarian candidates see as their opening.

The Libertarian gubernatorial candidate making the biggest splash in 2020 is Indiana’s Donald Rainwater, who has polled between 6 percent and 24 percent in a three-way race. “Indiana Libertarian candidate for governor targets voters upset by COVID-19 mandates,” went the headline this week in The Indianapolis Star.

“I don’t think it’s the government’s responsibility to tell people how to take care of themselves,” Rainwater told the paper. “I think this all goes back to the idea that I get to choose what I do to keep myself safe. I am against mandating vaccines, too.”

The other Libertarian gubernatorial candidate likely to make Election Day waves—Montana’s Lyman Bishop, who is polling within shouting distance of the Republican-Democratic margin—is also campaigning against pandemic mandates.

“I have said from the beginning, asking people to stay home is one thing. Telling people they have to stay home is something else altogether,” Bishop recently told Montana Public Radio. “The same logic applies to any other precautionary measure. In the face of any threat, our liberties an individual rights must come first. If they do not then everything we have fought for and built over the last 200 years will be meaningless….The pending collapse of our economy and the steady growth of tyranny and authoritarianism in our country is of the utmost importance and supersedes all other issues. If we cannot address these issues there will be nothing left for us to discuss.”

Jorgensen last night singled out Rainwater when talking about notable Libertarian campaigns this year. “He’s talking about the same things we’re talking about, with masks,” she said. “This is a free country, and we should be able to make our own decisions.”

Rather than merely defund the World Health Organization, Jorgensen wants to the U.S. to completely withdraw from it—and from other multilateral institutions, from the World Trade Organization to the United Nations to NATO. (Her go-to foreign policy line is to have America become “one giant Switzerland.”)

This summer, Libertarian Party messaging seemed to be clustering around the George Floyd protests, with the party touting its longstanding commitments to dismantling the country’s prison-industrial complex. As we approach the finish line, the radical limited-government party is reacting more and more to big-government pandemic policies. The politics of face masks, it turns out, is not a strictly bipartisan affair.

You can watch my whole Jorgensen interview below: