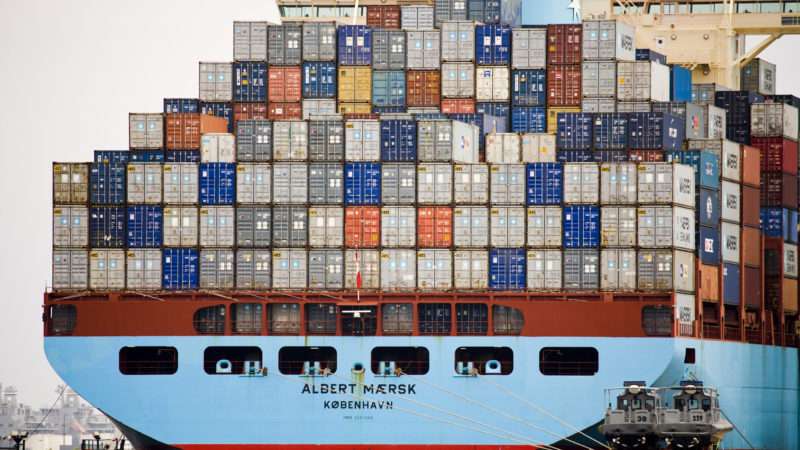 The vast majority of Americans have a favorable opinion of global trade. Vice President Mike Pence delivered a clear message to that group during last night’s debate: Joe Biden’s your man.

“Joe Biden wants to repeal all of the tariffs that President Trump put into effect,” Pence claimed—testing out the unusual political strategy of telling voters that your opponent wants to cut taxes. In fact, Pence’s pitch on Biden’s behalf is such a straightforward promise that could appeal to huge swaths of Americans on both sides of the partisan divide that the real head-scratcher is why Biden hasn’t embraced it already.

The case for repealing Trump’s tariffs is a strong one. The tariffs on Chinese imports have largely failed to bring about any of the benefits Trump promised, and both America and China seem to have already disregarded what little progress was made with the signing of a limited trade deal last year. The White House promised that tariffs would help rejuvenate American manufacturing, but the added costs from tariffs on industrial inputs were one of the chief reasons why the manufacturing sector had fallen into recession even before the COVID-19 pandemic hit. America’s trade deficit with China, which Trump promised to reduce, is now larger than it has ever been.

When you add them all up, the tariffs are one of the biggest tax increases in recent American history, and the cost is borne—despite what Trump and his allies like to claim—entirely by American consumers and businesses. The administration has spent $28 billion just to fix some of the messes these policies have created for American farmers.

And while trade issues will probably never swing as many voters as culture war battles, people have noticed that the trade war isn’t going well. Nearly 70 percent of Americans say they are “concerned” about how tariffs are adding to the cost of household products—a cost that could be as high as $1,200 annually for an average household.

And now the vice president says, again, that all that could go away if you vote for Biden. Seriously.

Even more incredible: Biden has failed to scoop up this Trumpian fumble and return it for a touchdown.

Sen. Kamala Harris (D–Calif.), Biden’s running mate and Pence’s opponent in last night’s debate, refused to engage Pence’s claim that a Democratic administration would revoke the tariffs. That’s what we’ve come to expect from Biden’s campaign, which has been careful to avoid making any commitments with regard to tariffs. Once a fairly ardent free-trader—at least for a Democrat—Biden’s approach throughout this year’s campaign has been to criticize Trump’s trade war for being self-defeating and foolish while simultaneously winking at the protectionists on the left who would probably love Trump’s tariffs if they’d been imposed by a Democratic administration.

Meanwhile, Biden is pushing a dubious “Buy American” policy that would translate into a series of expensive and ineffective regulations in the name of economic nationalism. Over and over again, Biden and Harris have been happy to point out the many failures of Trump’s anti-trade policies, but they don’t seem willing to apply those lessons going forward.

“You lost that trade war,” Harris said. “Farmers have experienced bankruptcy because of it. We are in a manufacturing recession because of it.”

Loading...
"Not by might, nor by power, but by my spirit, saith the Lord of hosts." Zechariah 4:6
BEFORE IT'S NEWS ON TELEGRAM
GET THE TELEGRAM APP - https://telegram.org/ JOIN OUR CHANNEL - https://t.me/BeforeitsNews
Read it..
BEFORE IT'S NEWS
SIGN UP FOR OUR NEWSLETTER
Today's Top Stories
More Names Added To The Lists
America Blackout! National Rollout of This Event! - Great AMTV Video
Pole Shift: Earth's Fault Lines Have Come to Life - Mega Earthquake Coming
Obama, Clinton, Biden & Brennan Will “Hang for Treason” When This Evidence Comes Out…Bombshell Recordings Prove They Had Seal Team Six Executed to Cover-up Deep State Crimes! +Videos
Sen. Durbin Tries to Trap Amy Coney Barrett, but Gets Embarrassed When She Has to Explain What Rights Are! - Great Video
X22Report: October Surprises, the Gift That Keeps on Giving, Wait for It! - Must Video
Mark Taylor New! The Day of Reckoning Is Upon the Deep State
JFK Jr. Returns Confirmed!! His Plane Is Flying According To Flight Logs!!
Benghazi Whistleblower Explains What is Coming! - Must Video
Joe Is Toast! Officially Named In Criminal Case In Ukraine!? This Is Crazy! - Great Video
Loading...
Featured
LIVE! protests and riots Wednesday night!
Best & Taylor Intel (10/14/2020): Matrix Mayhem Building Towards Destruction — "They're Gonna Need a False Flag to Cover This Up"
Truth Ministry! What Are They Trying to Hide? - Great Just Informed Talk Video
Live: Trump Holds 'MAGA' Rally in Iowa
X22Report: Economist Baffled by Recovery, Central Bank Just Announced Their Reset Plan! - Great Video
X22Report: October Surprises, the Gift That Keeps on Giving, Wait for It! - Must Video
Includes Full Whistleblower Video Segment Not Just 3 Mins! Obama Biden Hillary & Brennan Implicated In Seal Team 6 Execution! How Is This Still Secret Ep 21
Scientist Stan Deyo (10/13/2020) Hagmann: 'This is the Time I Have Been Warning About' — 'UFO Business Gaining Traction on Mainstream' — and MUCH MORE!
7 Unexpected Consequences of an Economic Collapse
Dutchsinse, The Earthquake Guy, Catches US Military In Secret Laser Test, Shooting Drone Down States Away
Loading...
Top Global
Fritz Springmeier: Culling The Sheep With The 7 Deadly Sins and Using 5G As An Extinction Level Event!! Awesome Videos!
Disturbing MKULTRA and Child Abuse Paintings Displayed on Billboards in Italy
Will America Stand or Be Destroyed! - Great Video
Yet Another Case of the Missing Virus! They Lied & Locked Down the World!
World's Largest Movie Chain Prepares for Bankruptcy - Hollywood Stars Bailout up Next?
World Economic Forum Just Declared Death To America! The ‘Great Reset’ Takes Devastating Aim
Meanwhile, Kim Jong Un Just Did Something Very Very Strange via Truth and Art Tv
Which Is Worse: King George III’s Stamp Act or Bill Gates III’s Digital Certificates?
Bank of Japan Joins Federal Reserve & ECB In Preparing Rollout Of Digital Currency
CDC Study Finds Most Con-Vid-19 Cases Were Admitted Mask Wearers
Loading...
Top Alternative
Hollywood Is Dying & the Elites Don’t Care! - Brandon Smith
LA Marzulli on Dark Outpost! Giants of the Bible and the Nephilim Moundbuilders
The 2020 Election Bamboozle: We Are All Victims of the Deep State’s Con Game
Emergency Preparedness – A Different Approach
30 Lost Ways of Survival from 1880 We Should All Learn
Fritz Springmeier: Culling The Sheep With The 7 Deadly Sins and Using 5G As An Extinction Level Event!! Awesome Videos!
The Storm Rises! Nothing Can Stop What's Coming: Benghazi, Seal Team 6 and $152 Billion to Keep Quiet via Lori Colley
Censorship: Facebook Bans Anti-Vaccine Ads Ahead of COVID Vaccine Rollout
Hidden bunkers discovered stocked with survival supplies
NTEB RADIO BIBLE STUDY: The Role Of Gold Throughout Bible Prophecy Is A Key Component In The 6,000-Year Old Battle Between God And Satan