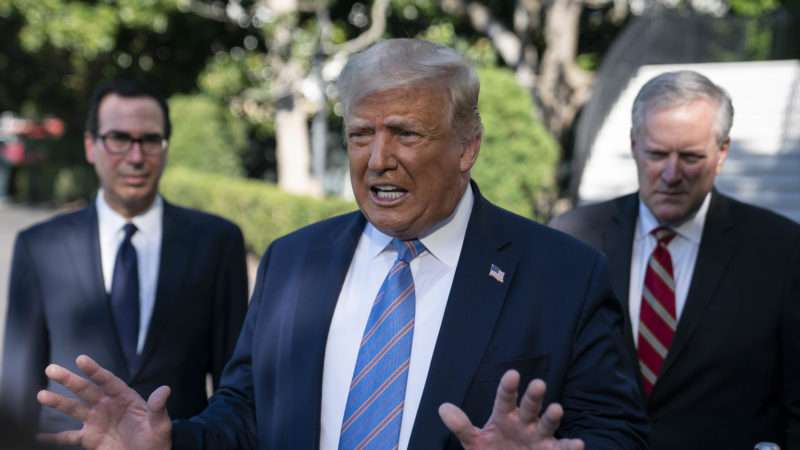 In the waning days of the 2020 election, President Donald Trump is making an explicit play for the votes of libertarians, promising that he’ll for sure finally end the war in Afghanistan.

“Thank you LIBERTARIANS. We are getting it all done, and FAST! VOTE TRUMP!!!” tweeted the president in response to a tweet from Sen. Rand Paul (R–Ky.) saying that Trump was ending our long-running conflict in Afghanistan and that he’d already withdrawn thousands of troops from the country.

Thank you LIBERTARIANS. We are getting it all done, and FAST! VOTE TRUMP!!! https://t.co/ai2vTb1V3G

It’s true that in 2020 the Trump administration made a number of moves to wind down America’s military presence in Afghanistan. In February, the U.S signed a peace deal with the Taliban. Since then, Trump has drawn down the number of troops in Afghanistan to about 8,600, the number deployed there when Trump took office.

In September, the president nominated William Ruger, a libertarian non-interventionist and critic of the war in Afghanistan, to be ambassador to the country.

Should everything go to plan, U.S. troop levels in Afghanistan will drop down to about 4,500 in November, and could even fall to around 3,000 by early next year.

That’s all pretty encouraging but it nevertheless comes after years of Trump escalating America’s involvement in Afghanistan. Despite the anti-war noises the president is making now, he’s still committed to keeping troops in the country for the foreseeable future.

When Trump was inaugurated in 2017, there were already about 8,500 troops in Afghanistan. Within a few months of being in office, the president had announced a troop surge, eventually increasing the number of military personnel in the country to 14,000 by 2018. At the end of 2019, troop levels were still hovering around 12,000.

During that time, the Trump administration also escalated America’s air war in the country. Last year, the U.S. dropped more bombs on Afghanistan than any year in at least a decade. The February peace deal inked the Taliban hasn’t stopped the U.S. from performing airstrikes.

The Trump administration, for all its talk of ending the war in Afghanistan, also has yet to commit to pulling all U.S. troops out of the country. “I don’t think there’s anyone who believes we’ll be at zero by the end of the year,” a senior administration official told NBC News.

That leaves little daylight between Trump’s position and Joe Biden’s. The Democratic candidate for president has said that he’d like to reduce the number of troops in Afghanistan while still leaving behind a residual counter-terrorism force of 1,500 to 2,000 at most.

That the president says he wants to end the war in Afghanistan is a good thing. That he hasn’t yet done it despite being in office for almost four years is what actually matters.