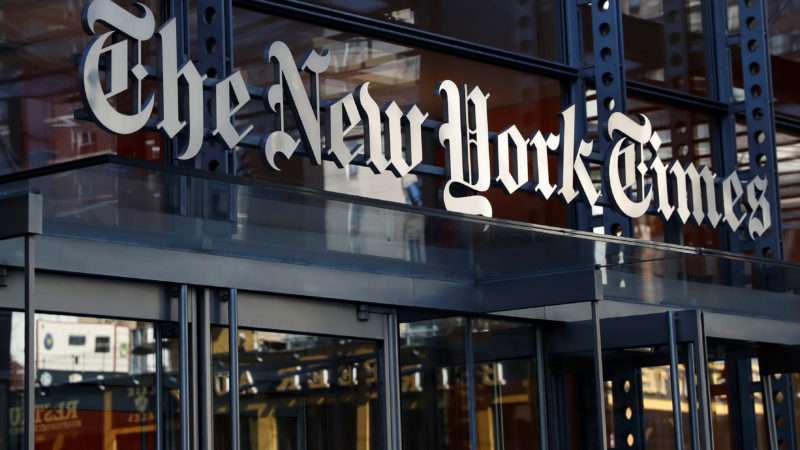 Since I have been trying without success for 16 years now to appeal to my fellow journalists’ avowed principles while beseeching them to follow Reason‘s (and Slate‘s) lead in disclosing which presidential candidate staffers plan to vote for, let me this year try a more mercenary tack: Y’all are leaving some choice traffic on the table.

As of Wednesday morning, our quadrennial survey of staff voting intentions was this week’s most popular item on the website. Having journalists publicly live up to their commitment to transparency is apparently a man-bites-dog story.

What’s strange about this stubborn transparency-for-thee stance, aside from the fact that many publications are missing those sweet clicks, is that reporters not on the politics beat have long since come around to the virtues of self-disclosure. Sixteen years ago, very few members of the Baseball Writers Association of America (BBWAA) revealed ahead of time, let alone publicly defended, their annual votes for the sport’s Hall of Fame. By 2014, the percentage of disclosers inched above 50. Last year, it was 84.1.

Along the way, a funny thing happened: Baseball writers started taking their vote more seriously. In fact, the BBWAA in 2017 changed the rules to make all future votes public. “We want transparency from the people we cover,” then-BBWAA President Derrick Goold told ESPN at the time. “And now we have a chance to do that ourselves.”

In fact, political voting preferences are inherently less objective and interesting than arguing over whether Curt Schilling belongs in the Hall (I would vote yeah, FWIW, though not for the bloody sock‘s crony capitalism). But the resident of 1600 Pennsylvania Ave. affects lives more than the inductees to Cooperstown, and knowing how political journalists vote arguably gives consumers more usable media-literacy information than whether some sportswag digs Jeff Kent. Wouldn’t it be interesting and potentially helpful to know how many news organizations had 2016 voter preferences similar to Slate‘s 59-1-1 count for Hillary Clinton, Jill Stein, and Evan McMullin?

But we have a cherished right to a secret ballot, objectors shoot back, and quite right: You can easily respond “none of your business” in your media organization’s public survey. But people might use our voting preference against us, they cry. You mean like, weaponizing a single out-of-context data point in an effort to besmirch a perceived malefactor? Toughen up, Francis.

Look, we know newspapers are going to overwhelmingly endorse Joe Biden. When political donations originating from employees of media organizations are eventually tallied up, we know they will tilt massively Democrat. Most people who are cognizant of the profession’s recent turn toward “moral clarity” over unattainable objectivity understand that that means those with non-lefty politics will be subjected to harsher adjectives.

And yet the very same media commentators who have long decried the so-called “view from nowhere” are absent in this battle for more journalistic transparency.

“Journalists can also be clear about where we’re coming from, and where we’re not,” New York Times media columnist Ben Smith wrote last month. “But journalism also has its own weird ideology that doesn’t match up with a party or movement. That you, the public, should know, rather than not know. That sunlight is the best disinfectant. That secrets are bad. That power deserves challenge, including the power of figures most of our respective audiences admire.”

All right, then, Big Media Ben. If secrets are bad, power deserves challenge, and sunlight is the best disinfectant, then let’s see you and your institution test out that whole “weird ideology that doesn’t match up with a party or movement” claim by putting the Gray Lady‘s money where its mouth is: Show us your votes!