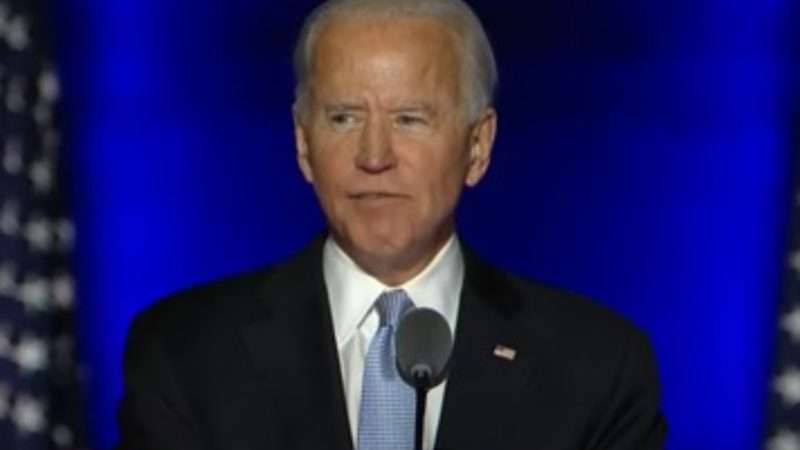 Joe Biden has come a long way since his days as a vociferous drug warrior. But judging from last week’s election results, Americans have come further.

The president-elect now opposes the mandatory minimum sentences and death penalties he once championed, and he portrays himself as a reformer determined to ameliorate the mass incarceration he promoted for decades. But Biden’s approach to drug policy remains intolerant and oppressive in several important ways.

Unlike most of his opponents for the Democratic nomination, Biden opposes repealing the federal ban on marijuana. Instead he favors decriminalizing low-level possession, a policy that was on the cutting edge in the 1970s and that won’t have much of an impact at the federal level, since the Justice Department rarely prosecutes minor marijuana cases.

In every state where marijuana was on the ballot last week, voters approved legalization of either medical or recreational use. Most strikingly, deep red South Dakota became the first state to legalize both simultaneously.

Thirty-five states now recognize cannabis as a medicine, while 15, including a third of the U.S. population, also have legalized recreational use. The latest Gallup poll puts public support for legalization at a record 68 percent.

Biden says states should be free to legalize marijuana. Yet he favors maintaining an untenable conflict between state and federal law that casts a dark shadow over the burgeoning cannabis industry, making basic business functions such as banking and paying taxes needlessly difficult, costly, complicated, and fraught with legal peril.

Regarding the “opioid crisis,” Biden promises to “stop overprescribing while improving access to effective and needed pain management.” Ignoring the lessons of the last four years, he fails to recognize how ham-handed efforts to curtail prescriptions have hurt both bona fide pain patients, depriving them of the medication they need to make their lives bearable, and nonmedical users, driving them toward black-market alternatives that are much more deadly because their potency is highly variable and unpredictable.

Last week voters in Washington, D.C., overwhelmingly approved a ballot initiative that opposes the arrest and prosecution of adults who use “entheogenic plants and fungi,” including psilocybin mushrooms, peyote, iboga root, and plants that contain dimethyltryptamine. Oregon voters, meanwhile, made their state the first jurisdiction in the country to legalize psilocybin use.

Those groundbreaking measures represent a long overdue reevaluation of the government’s authority to police people’s minds by dictating which chemicals they may ingest. It’s not an issue that Biden—even in his new, reform-minded incarnation—seems to have given any thought.

Drug users can avoid the fine by undergoing a “health assessment” at an “addiction recovery center.” But they are not required to do so, and assessments are supposed to “prioritize the self-identified needs of the client.”

Biden, by contrast, claims to recognize that drug users should not be treated as criminals, but he still thinks they should threatened with criminal penalties. “I don’t believe anybody should be going to jail for drug use,” Biden said last month. “They should be going into mandatory rehabilitation. We should be building rehab centers to have these people housed.”

While Biden considers that approach enlightened and humane, there is no moral justification for foisting “rehabilitation” on people who do not want it and may not even be addicted. That policy strips people of their liberty, dignity, and moral agency simply because they consume psychoactive substances that politicians do not like.

Biden, who in the late 1980s was saying ”we have to hold every drug user accountable,” now wants to lock drug users in “rehab centers” rather than prisons. If that looks like an improvement, it is only because Biden’s prior record is so appalling.