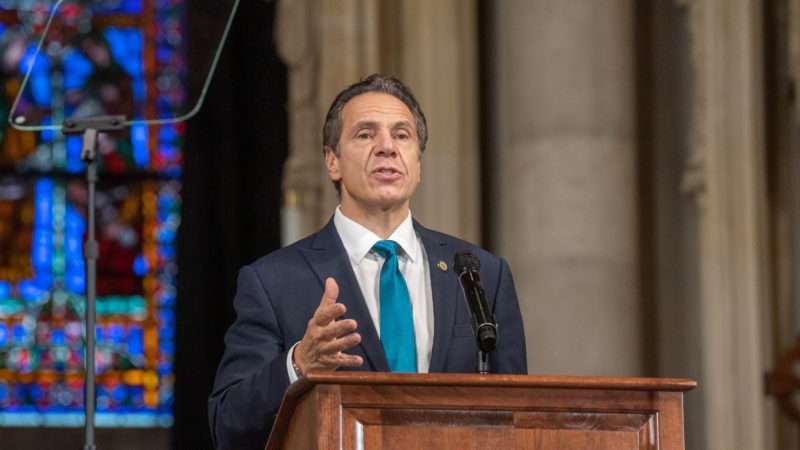 “This is a fear-driven response,” New York Gov. Andrew Cuomo said during an October 6 phone conversation about his pandemic-inspired restrictions on religious services. “This is not a policy being written by a scalpel. This is a policy being cut by a hatchet.”

The Roman Catholic Diocese of Brooklyn, which is asking the U.S. Supreme Court for an emergency injunction against Cuomo’s order, argues that a bit more care is required when the government interferes with the free exercise of religion. The Court’s decision will be an important indication of whether the justices are prepared to enforce constitutional limits on what politicians can do in the name of fighting COVID-19.

Under the hatchet-cut policy that Cuomo imposed last month, “houses of worship” in Brooklyn may admit no more than 10 people in “red” zones and no more than 25 in “orange” zones. The injunction application says those limits, which apply regardless of a building’s size, “effectively shutter all of the Diocese’s churches in those zones.”

The rules for secular activities are much looser. In red zones, “essential” businesses—including supermarkets, convenience stores, hardware stores, pet stores, banks, and various offices—operate without capacity limits. In orange zones, that is true for an even wider range of businesses, including department stores.

You might surmise that Cuomo is picking on churches because they have proved to be especially dangerous sources of infection. Yet U.S. District Judge Nicholas Garaufis, even while declining to enjoin enforcement of the restrictions, acknowledged that “there has not been any COVID-19 outbreak in any of the Diocese’s churches since they reopened.”

In fact, Garaufis said, “the Diocese has been an exemplar of community leadership” in responding to COVID-19. “At each step,” he noted, the diocese “has been ahead of the curve, enforcing stricter safety protocols than the State required.”

When the diocese began to reopen its churches, Garaufis added, it enforced “rigorous safety protocols.” Those included face masks, physical distancing, shorter services, sanitization between masses, a revised Holy Communion ritual, and a 25 percent capacity cap, which it continued following even when the legal limit was raised.

The diocese is perfectly willing to accept “neutral public-health guidelines” aimed at preventing virus transmission. It is not willing to accept a policy that explicitly imposes special burdens on religious activities while granting more leeway to myriad secular activities that pose similar or greater risks.

The Supreme Court has said the First Amendment’s Free Exercise Clause does not require religious exemptions from neutral, generally applicable laws. But it also has said laws are presumptively unconstitutional when they discriminate against religion.

Cuomo’s rules clearly fall into the latter category. By denying that reality, Garaufis and the U.S. Court of Appeals for the 2nd Circuit, which upheld his decision, are in effect saying an emergency like the COVID-19 epidemic suspends the constitutional rights Americans otherwise enjoy, giving politicians like Cuomo unlimited discretion to respond as they see fit.

In a Federalist Society speech he delivered on the same day the diocese filed its application with the Supreme Court, Justice Samuel Alito warned that “laws giving an official so much discretion” can be abused. When that happens, he said, “the Supreme Court and other courts cannot close their eyes.”

The Court already has closed its eyes twice, turning away challenges to restrictions on religious services in California and Nevada—decisions from which Alito, joined by three other justices, dissented. The Nevada case was especially striking, since the state’s rules for houses of worship were stricter than the rules for other venues—including casinos, bars, restaurants, gyms, arcades, and bowling alleys—where the risk of virus transmission was arguably higher.

The contrast between the treatment of religious and secular establishments in New York is even starker, and the replacement of Ruth Bader Ginsburg with Amy Coney Barrett could make a crucial difference this time around. If the Court again declines to intervene, it will send a dangerous signal at a dangerous time for the Constitution.

Loading...
"Not by might, nor by power, but by my spirit, saith the Lord of hosts." Zechariah 4:6
BEFORE IT'S NEWS ON TELEGRAM
GET THE TELEGRAM APP - https://telegram.org/ JOIN OUR CHANNEL - https://t.me/BeforeitsNews
Read it..
BEFORE IT'S NEWS
SIGN UP FOR OUR NEWSLETTER
Today's Top Stories
Explosive! Steve Quayle, Mike Adams, Gary Heavin: December Deadly Surprise!
Stark Warning Just Issued By President Trump and An Even Eerier Warning From a Chinese Citizen
Here Is Bill Gates’ Injectable Biochip, For Those Who Think It Is Conspiracy Theory
Kraken Release Day! Sidney Powell's First 'Biblical' Case To Be Filed In Georgia
Jeffrey Prather - Krakened! Not Myth But Real! The Sting of the Steal Revealed! This Isn’t Over! It’s Just Getting Started! - Must Video
David Icke: Something Unexpected Is Coming! They Don't Want Us To Know This
Benjamin Fulford: Arrest of Cabal Agent in Japan Will Be a Game-changer & The Red & White Dragons Update
America Important Situation Update reports for Nov. 24th, 23rd and 21st – plus a new interview with General Thomas McInerney
X22Report: Keystone Is the Start, Gettysburg Was the Turning Point of the War, Watch PA! - Must Video
This Is About the Survival of the Greatest Nation on Earth! - Lin Wood: Every Lie Will Be Revealed! - Must Video
Loading...
Featured
The “Bombshell” That Wasn’t ~ Ep. 1401 ~ The Dan Bongino Show
Predicting a Second Trump Term, Sidney Powell Says ‘Massive’ Georgia Lawsuit Coming by Thanksgiving Eve
Anonymous: "You Need to Hear This, They Left a Message!"
BREAKING: Trump Pardons Michael Flynn
Last Chance: Inflation Comes Next!
BIDEN and HARRIS -- EXPOSED:
Sidney Powell's “Kraken” Is DOD Cyber Warfare Program! We Are at War!
Trump Will Be Inaugurated!! Here's How!! We Will See Deepstate High Profile Arrests!! Biden Making Sure Of It!! (Must Video)
Breaking Now: Urgent PA Senate Election Hearing With Giuliani! This Could Change Everything! - Next News Network Must Video
Robert David Steele: Donald Trump Plans Federal Reserve $100 Trillion To Be Confiscated? What Will $100T Buy?
Loading...
Top Global
Persian Gulf update 11/25/2020..Saudi Aramco says domestic supply not affected by Houthi-led missile attack
The NWO Floating Trial Balloons: Qantas and Ticketmaster Will Require YOU To Be Vaccinated For Entry
Communist China Says All Humans Should Be Marked, Tracked to Prevent Spread of Covid-19
UK Thought Police: When Questioning Official Narratives Becomes ‘Terrorism’
Vaccines: Whistleblower in 2020 - David Knight Show. Great Video!
Medical Police State Horrors in Australia: Young Man Choked Out, Slammed to the Ground, Heaved Out of a Restaurant for Not Wearing a Mask! +Videos
The Great Defiance! Fight the Bully
A Child Infected with HIV Every 100 Seconds – UNICEF
Breaking: "Holy Land Attack Israel Hits Rural Damascus Iran Military"
Tracking the Vaccinated With RFID Chip! Dark Winter Is Code Name For The Beginning Of The Great Tribulation Or The Times Of Jacob’s Troubles! Great Videos!
Loading...
Top Alternative
Monopoly Men (Federal Reserve Fraud). Great Documentary Featuring Eustace Mullins. Excellent Video!!
The Colossal Fall of Fox News! - Dr. Steve Turley Must Video
COVID19 KILLS DOG -Department Of Health Testing All Dogs And Cats
Exposing The Beast System Behind "The Great Reset"
A Third of Guests at Ohio Wedding, Including Bride and Groom, Test Positive for COVID
PA Judge Blocks Certification! – PA Legislature Holds Public Hearings!
Can’t Happen Soon Enough
What's in your house? What are you putting on your skin? -- The following cursed items (below) were found in BEZAI's house: -- "And the brothers immediately by night sent away both Paul and Silas to Berea, who having arrived, into the synagogue of the Jews went." -- 17:10.
We are not in Kansas anymore.
The NWO Floating Trial Balloons: Qantas and Ticketmaster Will Require YOU To Be Vaccinated For Entry