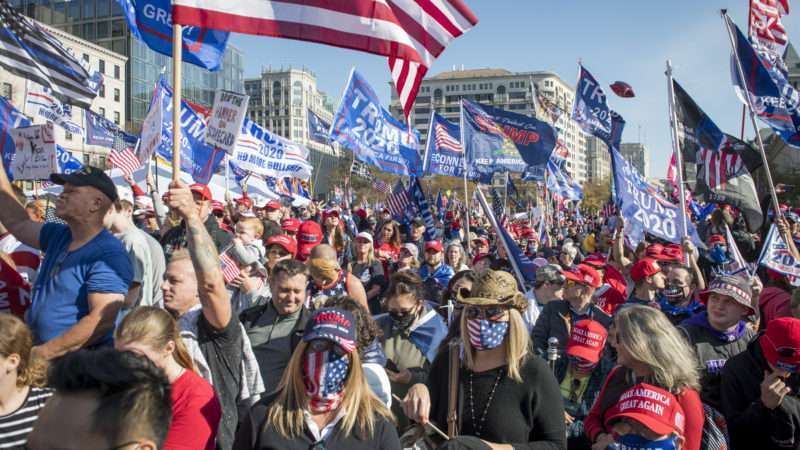 Donald Trump began his presidency by asserting, based on “alternative facts,” that he had attracted “the largest audience to ever witness an inauguration.” He is ending his presidency by averring that Saturday’s pro-Trump rally in Washington, D.C., attracted more than 1 million people. And just as he claimed that he would have won the popular vote in 2016 if it weren’t for “the millions of people who voted illegally,” he is now insisting that the Democrats stole this year’s presidential election by altering “millions of ballots.”

These are fitting bookends for a president who often seems to live in a parallel universe shaped by his ego’s demands. While Trump’s fantasies about massive election fraud may be more consequential than his fictitious crowd numbers, both kinds of misrepresentations reflect his need to twist reality into grotesque but self-flattering shapes. While that tendency is often amusing, it is also more than a little disturbing to anyone who thinks truth should count for something in political debates.

The president’s endorsement of the claim that “more than a MILLION people showed up to support this President” took the form of a retweet. But White House Press Secretary Kayleigh McEnany made the same claim directly. “AMAZING!” she tweeted on Saturday. “More than one MILLION marchers for President @realDonaldTrump descend on the swamp in support.”

It would indeed be amazing, if it were true. Trump himself put the size of the crowd in the “hundreds of thousands” later the same day. But he also said “tens of thousands.” The Washington Post said McEnany was “vastly exaggerating the crowd size.” The Post put the number of participants in the “thousands,” as did The New York Times and Fox News. USA Today went with “tens of thousands.” So did conservative columnist Miranda Devine in a New York Post piece declaring the victory of “Trumpism.” Voice of America reported that “it is not clear how many people turned up in Washington, and the city’s police department does not estimate crowd sizes.”

According to ridership data from the Washington Metropolitan Area Transit Authority, rail use was slightly higher on the day of the rally than it was the previous Saturday (80,000 vs. 77,000), while bus use was slightly lower (137,000 vs. 142,000). Those numbers would not capture people who drove in for the rally and then drove out without using public transit. But “more than one MILLION” visitors, or even “hundreds of thousands,” should have had a more noticeable impact on transit use, especially since parking was restricted ahead of time.

Although there is a big difference between “tens of thousands” and “more than a MILLION,” Trump has embraced both estimates. But as with his claims about election fraud—the main motivation for Saturday’s rally—many of his supporters seem to think actual numbers are less important than the sentiment underlying them.

“You just had to see the enthusiastic cheer of tens of thousands of pro-Trump protesters who flocked to Washington, DC, over the weekend to understand it doesn’t really matter what the final electoral vote tally is: Trumpism has won,” Devine writes. “Even if, as seems probable, Joe Biden ends up living in the White House, and inviting his son Hunter to dinner with new business prospects from China, the corrupt bipartisan globalist establishment is not back in the ascendancy.”

Doesn’t it sort of matter whether Biden was duly elected president or, as Trump still maintains, stole the election through a massive criminal conspiracy? “Even if there was no skulduggery, the Trump campaign lawsuits come to nothing and the Dominion voting machines and their suspicious-sounding software get a clean bill of health, it’s a service to public trust for the Trump campaign to go through a process that is legal and accounted for within the Constitution,” DeVine says. “If there has been no fraud or miscounting, then public faith will be restored in the integrity of our elections going forward. That is a good thing which Biden should embrace if he really believes in unity and healing.”

Yet the president is hardly serving the cause of “unity and healing” by asserting, over and over again without evidence, that he actually won the election, which according to him was “rigged” by systematic fraud involving “millions of ballots.” Whether or not that’s true is of more than passing interest to Americans concerned about “the integrity of our elections.” And if it’s not true, what does that say about a man who would casually engage in such reckless accusations? Whatever you may think of “the corrupt bipartisan globalist establishment,” the fabulism that is inseparable from Trumpism makes it impossible to have a meaningful discussion about that subject, or anything else.