Update Nov. 5, 2020: EFF has released a new  training video on how to visually identify police surveillance that may be use at protests. The slides and transcript are also available. Accordingly, we have re-upped the post, but the rest of the text was originally published June 4, 2020. 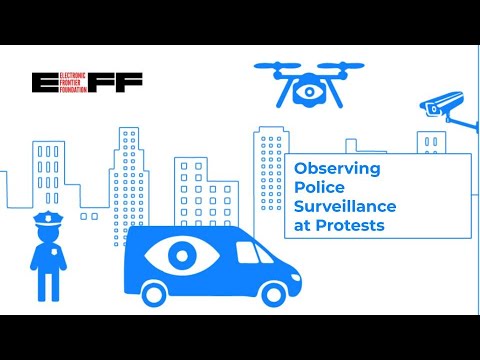 The full weight of U.S. policing has descended upon protesters across the country as people take to the streets to denounce the police killings of Breonna Taylor, George Floyd, and countless others who have been subjected to police violence. Along with riot shields, tear gas, and other crowd control measures also comes the digital arm of modern policing: prolific surveillance technology on the street and online.

Here is a review of surveillance technology that police may be deploying against ongoing protests against racism and police brutality.


Surveillance Tech that May be Visible
Body-Worn Cameras

Unlike many other forms of police technology, body-worn cameras may serve as both a law enforcement and a public accountability function. Body cameras worn by police can deter and document police misconduct and use of force, but footage can also be used to surveil both people that police interact with and third parties who might not even realize they are being filmed. If combined with face recognition or other technologies, thousands of police officers wearing body-worn cameras could record the words, actions, and locations of much of the population at a given time, raising serious First and Fourth Amendment concerns. For this reason, California placed a moratorium on the use of face recognition technology on mobile police devices, including body-worn cameras.

Body-worn cameras come in many forms. Often they are square boxes on the front of an officers chest. Sometimes they are mounted on the shoulder. In some cases, the camera may be partially concealed under a vest, with only the lens visible. Companies also are marketing tactical glasses that includes a camera and face recognition; we have not seen this deployed in the United States–yet.

A body-worn camera lens is visible between the buttons on a Laredo Police officer’s vest. Source: Laredo Police Department Facebook

Drones are unmanned aerial vehicles that can be equipped with high definition, live-feed video cameras, thermal infrared video cameras, heat sensors, automated license plate readers, and radar—all of which allow for sophisticated and persistent surveillance. Drones can record video or still images in daylight or use infrared technology to capture such video and images at night. They can also be equipped with other capabilities, such as cell-phone interception technology, as well as back-end software tools like license plate readers, face recognition, and GPS trackers. There have been proposals for law enforcement to attach lethal and less-lethal weapons to drones.

Drones vary in size, from tiny quadrotors (also known as Small Unmanned Aerial Vehicles or sUAVs) to large fixed aircraft, such as the Predator Drone. They are harder to spot than airplane or helicopter surveillance, because they are smaller and quieter, and they can sometimes stay in the sky for a longer duration.

Activists and journalists may also deploy drones in a protest setting, exercising their First Amendment rights to gather information about police response to protestors. So if you do see a drone at a protest, you should not automatically conclude that it belongs to the police.

Photo by Mike Katz-Lacabe (CC BY)

Automated license plate readers (ALPRs) are high-speed, computer-controlled camera systems that can be mounted on street poles, streetlights, highway overpasses, mobile trailers, or attached to police squad cars. ALPRs automatically capture all license plate numbers that come into view, along with the location, date, and time. The data, which includes photographs of the vehicle and sometimes its driver and passengers, is then uploaded to a central server.

Photo by Mike Katz-Lacabe (CC BY)

At a protest, police can deploy ALPRs  to identify people driving toward, away from, or parking near a march, demonstration, or other public gathering. For example, CBP deployed an ALPR trailer at a gun show attended by Second Amendment supporters. Used in conjunction with other ALPR’s around the city, police could track protestors’ movement as they traveled from the demonstration to their homes.

Hundreds of police departments around the country have mobile towers that can be parked and raised a number of stories above a protest. These are often equipped with cameras, spotlights, speakers, and sometimes have small enclosed spaces for an officer. They also often have ALPR capabilities.

Common towers include the Terrahawk M.U.S.T. which looks like a guard tower mounted on a van and the Wanco surveillance tower, which is a truck trailer with a large extendable pole.

Forward-looking infrared (FLIR) cameras are thermal cameras that can read a person’s body temperature and allow them to be surveyed at night. These cameras can be handheld, mounted on a car, rifle, or helmet, and are often used in conjunction with aerial surveillance such as planes, helicopters or drones.

Face recognition in the field from a San Diego County presentation

At a protest, any camera you encounter may have face recognition or other video analytics enabled. This includes police body cameras, mounted cameras on buildings, streetlights, or surveillance towers.

Also, some police departments have biometric devices, such as specialized smartphones and tablets, that show the identity of individuals in custody. Likewise, face recognition can occur during the booking process at jails and holding facilities.

EFF and other organizations have long called on social media platforms like Facebook to prohibit police from using covert social media accounts under fake names.  Pseudonyms such as “Bob Smith” have long allowed police to infiltrate private Facebook groups and events under false pretenses.

Cell-site simulators, also known as IMSI catchers, Stingrays, or dirtboxes, are devices that masquerade as legitimate cell-phone towers, tricking phones within a certain radius into connecting to the device rather than a tower.

Real-time crime centers (RTCCs) are command centers staffed by officers and analysts to monitor a variety of surveillance technologies and data sources to monitor communities. RTCCs often provide a central location for analyzing ALPR feeds, social media, and camera networks, and offer analysts the ability to use predictive algorithms.