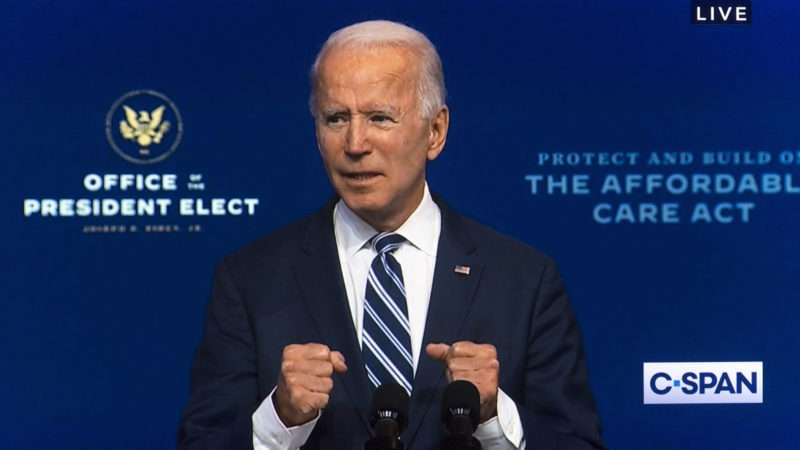 Last May, Education Secretary Betsy DeVos formally issued new rules regarding Title IX, the law that prohibits sexual harassment in schools. Though intended to clarify confusing and contradictory past federal guidance that had weakened due process protections for students accused of misconduct, the new rules drew swift condemnation from Democrats —who accused the Trump administration of harming sexual assault survivors. Joe Biden vowed to put a “quick end” to the reforms if elected president.

This has now come to pass: Biden will take office as the 46th president on January 20, 2021. There is every reason to believe that Biden—who was heavily involved in the Obama administration’s policy-making on this subject—meant what he said, and supporters of DeVos’s reforms should fully expect the new administration to do whatever they can to undermine them.

DeVos herself is fully aware of this. When I interviewed her for the November 2020 issue of Reason, she expressed serious doubts that a (then hypothetical) Biden administration would make good policies, on Title IX or any other education issue.

“There’s really no issue in education that he hasn’t had 40 years to address and solve, and he hasn’t,” said DeVos. “I can’t even imagine what new or positive thing he would bring to all of these issues.”

That said, it won’t be easy for the new administration to undo the reforms, which went through a multiyear review as required by the Administrative Procedures Act. Going back to the previous Title IX standards would require an equally involved and time-consuming process. Biden officials could signal to colleges and universities that they will ignore violations of the new Title IX rules, but that wouldn’t prevent students from suing their institutions for failing to follow proper procedures. Anything short of new legislation—which could be blocked by a Republican-controlled Senate—is likely to create mass confusion about which rules need to be followed, even as some courts have reached the conclusion that it is indeed mandatory for education officials to provide certain due process rights to accused students.

To recap: Title IX is a decades’ old federal statute that obligates schools receiving federal funding to protect students from sexual misconduct. During the Obama administration, the Education Department’s Office for Civil Rights vastly expanded the purview of Title IX, advising colleges and universities that their funding could be at risk if they did not make more aggressive efforts to investigate harassment and assault. The office’s written guidance encouraged education officials to move toward a “single-investigator model,” under which sexual misconduct claims were handled by a lone administrator rather than a panel. The guidance also discouraged the cross-examination of alleged victims by accused students and chipped away at due process. As a result, hundreds of students brought lawsuits against their universities for following guidance that they claimed violated their rights.

Under the Trump administration, DeVos made it a priority to fix this mess. Since the Obama-era guidance was just that—guidance, rather than a formal rule—DeVos was able to rescind it without much difficulty. Forcing colleges and universities to stop following the bad guidance, though, was a harder task. Education officials had to propose new rules, and then subject them to a lengthy public notice and comment period. It took from November 2018 until August 2020 for the rules to go into effect.

These rules—which require a kind of cross-examination by representatives for the accused, abolish the single-investigator model, and limit the scope of Title IX—can’t be undone unless the government goes through the public notice and comment period all over again.

“The only way it could be done is through a Congressional Review Act or reregulating, which would have to go through the whole [Administrative Procedures Act] process again,” said DeVos. “I think it would be very hard to turn back. It, obviously, would be terribly ill-advised, because what we have here is a very well-thought-out, balanced, fair rule that treats everyone rightly and fairly.”

The Biden administration could announce publicly that it won’t enforce the new Title IX rules: For example, Biden’s secretary of education could clarify that no institution’s federal funding will be at risk if they return to the single-investigator model. But this might not provide much assurance to universities, who could still face lawsuits from students in the event that they did use the single-investigator model. The fact that various courts have ruled in favor of the sorts of protections that the new rules enshrined is also a factor.

“Many of the due process protections, like the right to a live hearing and the right to at least some type of cross-examination, are things that courts have held are critical to due process and even to contractual promises of basic fairness,” Samantha Harris, an attorney and senior fellow at the Foundation for Individual Rights in Education, told Reason. “So a new Department of Education can’t just come in and say ‘okay, we’re back to single investigator’ without running afoul of numerous court rulings from around the country.”

Even opponents of the new rules acknowledge that universities will have to follow them for the foreseeable future. Jackie Gharapour Wernz, a former OCR attorney who wishes the new rules would not exist “for one day longer,” nevertheless notes that “the risks of litigation for educational institutions if they do not follow the due process requirements in rules that remain in effect are too great to abide.”

Harris, on the other hand, thinks it would be a serious mistake for the Biden administration to retreat to the previous standards, even if it were possible to do so.

“We cannot go back to an era where an accusation is tantamount to guilt, where students are expelled without so much as a hearing or the opportunity to see all the evidence against them, where investigators and panelists are trained using prejudicial materials that rely on sex-stereotypes,” she said. “Fundamental fairness should not be a political issue.”

If Biden were to turn back the clock on Title IX and due process, it would be somewhat ironic, since the president-elect has himself been accused of inappropriate behavior and arguably benefiting from the sort of presumption of innocence that was gravely threatened under the guidance issued by the Obama administration. As I noted after Tara Reade came forward with her allegation, it’s quite likely Biden would have been found guilty if the case had been judged under the standards that he championed for an accused college student.

While Reade’s allegation was the most serious and remains unproven, Biden has also been chided for less egregious violations of women. When I asked DeVos if she thought Biden could have faced a Title IX investigation as a student, she said, “Oh my gosh, he would have had hundreds of them,” she said. “Hundreds of them.”

That any negative interaction between two people could easily escalate into a sexual misconduct investigation—as long as it occurred on a college campus, or involved college students or faculty—was one of the major reasons for revising Title IX. Addressing this was an important legacy of the Trump administration, and one that will probably endure for some time, though don’t be surprised if Biden makes a go at them.