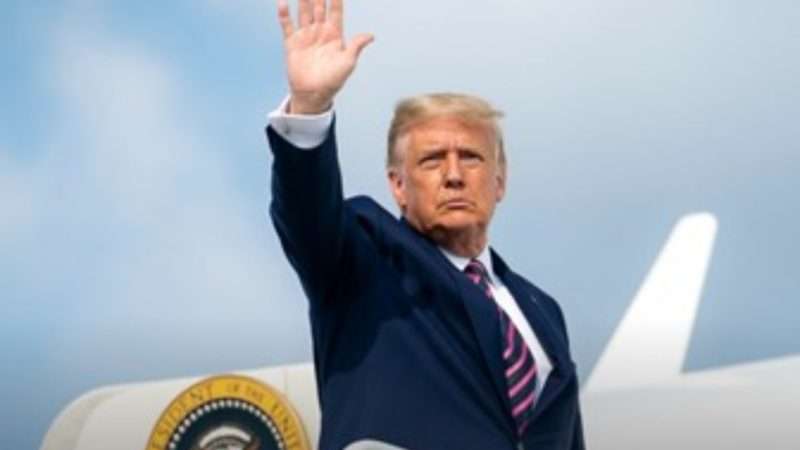 President Donald Trump thinks the Supreme Court “chickened out” when it declined to hear Texas Attorney General Ken Paxton’s lawsuit seeking to overturn the election results in four battleground states. “The fact that the Supreme Court wouldn’t find standing in an original jurisdiction matter between multiple states, and including the President of the States, is absurd,” Trump says on Twitter, suggesting that the justices simply “didn’t want to rule on the merits of the case.”

One problem with this gloss is that the question of whether Texas has standing to sue other states because it does not like their election procedures was central to Paxton’s case—a threshold issue that had to be resolved lest the Court overstep its authority to rule on genuine “cases or controversies.” Seven members of the Court, including all three of the justices nominated by Trump himself, explicitly agreed that Texas “has not demonstrated a judicially cognizable interest in the manner in which another State conducts its elections.”

The two other justices, Samuel Alito and Clarence Thomas, thought the Court did not have discretion to stop Paxton from filing his bill of complaint, but they agreed that no “other relief” was appropriate. Although they did not explain the reasoning behind the latter conclusion, it may well have included the judgment that Texas did not have standing, which is distinct from the issue of whether the Court’s original jurisdiction in cases involving disputes between states gives it leeway to turn away a suit like Paxton’s.

But even if Texas could have established standing, that hardly means the Court would have been receptive to Paxton’s claims. In a decision published the day after the justices declined to hear the Texas case, a Trump-nominated federal judge in Wisconsin ruled on the merits of arguments similar to Paxton’s and concluded that they “fail as a matter of law and fact.”

Wisconsin was one of the states that Paxton sued, along with Pennsylvania, Georgia, and Michigan. Paxton objected to Wisconsin’s use of drop boxes for absentee ballots, its policy regarding deficiencies in address information for absentee ballot witnesses, and its determination that people at high risk from COVID-19 counted as “indefinitely confined voters,” meaning they did not have to submit copies of their IDs when they applied for absentee ballots. Trump complained about these same features of Wisconsin’s election rules in a separate federal lawsuit he filed on December 1, nearly a month after the election.

In Saturday’s decision, U.S. District Judge Brett Ludwig, who was appointed by Trump this year, concludes that the president has standing to sue as a candidate in the election—which is quite different from the question of whether a state such as Texas could sue based on the same alleged deficiencies. Although Trump tried to intervene in Paxton’s lawsuit, he was not a plaintiff.

After hearing arguments from both sides of the case, Ludwig rejected Trump’s claim that Wisconsin’s rules violated the Constitution’s Electors Clause, which says “each State shall appoint” presidential electors “in such Manner as the Legislature thereof may direct.” The “manner” chosen by Wisconsin’s legislature, Ludwig notes, is “by general ballot at the general election.” Trump, by contrast, wanted Ludwig to set aside the results of that election and require “the appointment of electors by the Wisconsin legislature”—a remedy Ludwig describes as “even more extraordinary” than Trump’s claim that President-elect Joe Biden’s victory was achieved through unconstitutional means.

In Ludwig’s view, the procedures cited by Trump (and Paxton) cannot, as a matter of law, violate the Electors Clause, since they are consistent with the “manner” that Wisconsin’s legislature prescribed for picking presidential electors—i.e., through a popular vote. But “even if ‘Manner’ includes aspects of election administration,” he says, “Defendants administered Wisconsin’s 2020 presidential election as directed by the Wisconsin Legislature.”

Ludwig notes that the legislature created the Wisconsin Elections Commission (WEC, the lead defendant) and gave it broad authority to regulate elections. Acting under that authority, the commission instructed election officials who encounter an absentee ballot witness certificate with an incomplete address to fill in the details by contacting the voter or by relying on “extrinsic sources.” That directive came in 2016, four years before Trump filed his suit. This year the WEC updated its guidance, saying “the clerk should attempt to resolve any missing witness address information prior to Election Day if possible, and this can be done through reliable information (personal knowledge, voter registration information, through a phone call with the voter or witness).” It added that “the witness does not need to appear to add a missing address.”

That policy, Trump argued, was inconsistent with Wisconsin law. “If a certificate is missing the address of a witness,” the statute says, “the ballot may not be counted.” But the law is silent on the question of whether missing address information can be added later, making the ballot acceptable.

Last March, the WEC issued guidance saying that “many voters of a certain age or in at-risk populations” could qualify as “indefinitely confined” during the COVID-19 pandemic. It said that designation “does not require permanent or total inability to travel outside of the residence,” citing the statutory definition, which applies to voters who are “indefinitely confined because of age, physical illness or infirmity or are disabled for an indefinite period.” Apparently as a result of the WEC’s guidance, the number of voters claiming that status increased dramatically this year.

In August, the WEC authorized drop boxes for absentee ballots, and more than 500 were used across the state during this year’s election. Wisconsin law says absentee ballots “shall be mailed by the elector, or delivered in person, to the municipal clerk.” The WEC viewed drop boxes as one way of delivering ballots “in person.”

Trump argued that the WEC misinterpreted state law when it announced these policies. “While plaintiff’s statutory construction arguments are not frivolous,” Ludwig says, “they consist of little more than ordinary disputes over statutory construction,” and “these issues are ones the Wisconsin Legislature has expressly entrusted to the WEC.” He elaborates on that point:

In addition to addressing the merits of Trump’s claims (and therefore Paxton’s claims) about Wisconsin’s election rules, Ludwig emphasizes the “extraordinary” nature of the president’s lawsuit—a word he uses in italics three times. He notes that Trump himself “narrowly won the state of Wisconsin’s electoral votes four years ago.” Biden’s margin this year was similar: 20,600 vs. 22,700 for Trump in 2016. Yet in this case, Ludwig notes, “a sitting president who did not prevail in his bid for reelection has asked for federal court help in setting aside the popular vote based on disputed issues of election administration, issues he plainly could have raised before the vote occurred.”

Ludwig’s opinion is not quite as scathing as some of the other decisions rejecting attempts to overturn the election results. But it should be clear from all of these cases that Trump’s problem is not that courts have failed to consider the merits of his arguments.

Although Ludwig does not mention it, Trump’s Wisconsin lawsuit conspicuously failed to allege election fraud, let alone the sort of systematic fraud that the president still claims delivered a phony victory to Biden—a fantasy that polls indicate most of his supporters accept. In that respect, this case resembles all the other post-election lawsuits that the Trump campaign has filed in state and federal courts, which fell far short of presenting credible evidence that the election was stolen, notwithstanding the president’s insistence that “the evidence is overwhelming.”

Trump’s own motion to intervene in Paxton’s lawsuit conceded that he could not back up those charges. “It is not necessary for the Plaintiff in Intervention to prove that fraud occurred,” said Trump’s lawyer, John Eastman. The problem, he argued, was that the election procedures challenged by Paxton made any such scheme “undetectable.”