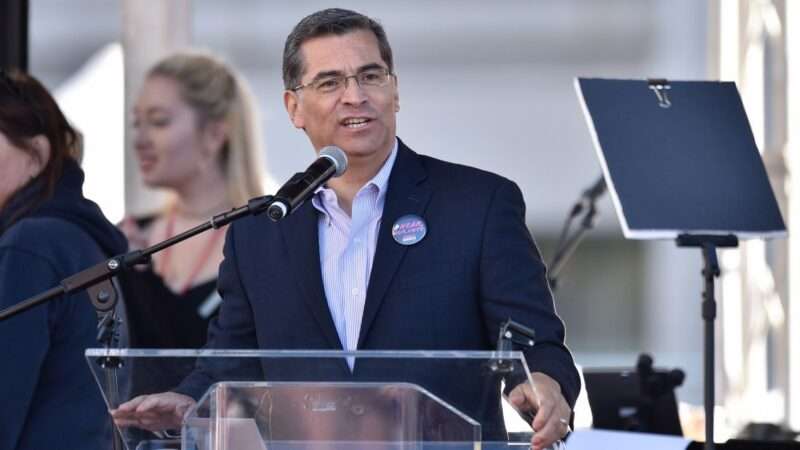 President-elect Joe Biden has selected a California big-government authoritarian nanny state fan to run the Department of Health and Human Services, a warning sign for anybody who wishes to manage his own medical affairs and life choices.

On Sunday, multiple outlets reported that California Attorney General Xavier Becerra was being tapped to lead the agency. The Washington Post diplomatically described Becerra as an “unorthodox” choice. He was a member of Congress before becoming attorney general. He does not have a background in health management. He has degrees in economics and law.

Becerra, though, does have a lengthy history of believing that the power of government is the solution to all that ails you, whether you like it or not. He’s a big believer in “Medicare for All,” a complete government takeover of medical coverage via single-payer health care. Biden differentiated himself from other presidential candidates by resisting the call to nationalize health insurance. Becerra’s nomination will most likely give fuel to anybody arguing that the Democratic Party is being pulled leftward, but he has said that he would support preserving and bolstering the Affordable Care Act, which is Biden’s plan.

Becerra is probably best known to anybody outside of California for the state’s many, many lawsuits against President Donald Trump’s administration—more than 100 of them—for everything from changes in policy on immigration, to environmental issues, to, yes, the administration’s attacks on the Affordable Care Act.

Certainly, a number of those lawsuits are about protecting the rights of people in California, but others were actually to stop the Trump administration from deregulating and reducing the power and scope of the federal government. Becerra fought to protect net neutrality rules that were overturned by the Federal Communications Commission. He fought the State Department when it loosened rules to allow for 3D-printed guns.

His record within the state of California shows that Becerra is very happy to use the nanny state power of government to control what you do with your body and property. In November, his office filed a brief in support of a California bill banning the sales of flavored tobacco. Even though California has legalized marijuana farming and consumption, his office still brags about crackdowns on illegal grow operations against those who try to bypass the state’s extremely oppressive and expensive regulations. He supported and fought to force companies like Uber and Lyft to classify their freelance drivers as employees, even against the workers’ own desires, and even if it resulted in the loss of thousands of jobs. He was thwarted by the passage of Proposition 22 by voters in November. And he shares his predecessor Kamala Harris’s fondness of conflating prostitution busts with fighting alleged nonconsensual “sex trafficking.“

But one of Becerra’s dumbest brags provides the best insight into how he might run America’s largest health agency. In 2017, Becerra’s office won a $300,000 legal settlement from Gatorade because of a mobile game that he argued slandered the good name of water. Gatorade had distributed a free mobile game featuring sprinter Usain Bolt. As part of the game, players were encouraged to run through Gatorade logos and avoid patches of water. Becerra actually accused the company of engaging in “false advertising” and trying to convince impressionable children and teens that water is bad for them. This is how stupid Becerra thinks people are.

It seems like such a little and petty thing, and it is. That’s the problem. It is an indication of a person who has very little respect for people’s individual health choices, other than for abortion. He’s very pro-choice and his office has consistently taken legal actions to defend abortion access, even supporting challenges against anti-abortion regulations in other states. Beyond abortion, though, Becerra’s record is one with very little respect for individual life choices when government nannies think they know better. And worse, he sees the courts as a proper mechanism for controlling those choices with arrests or fines and penalties.