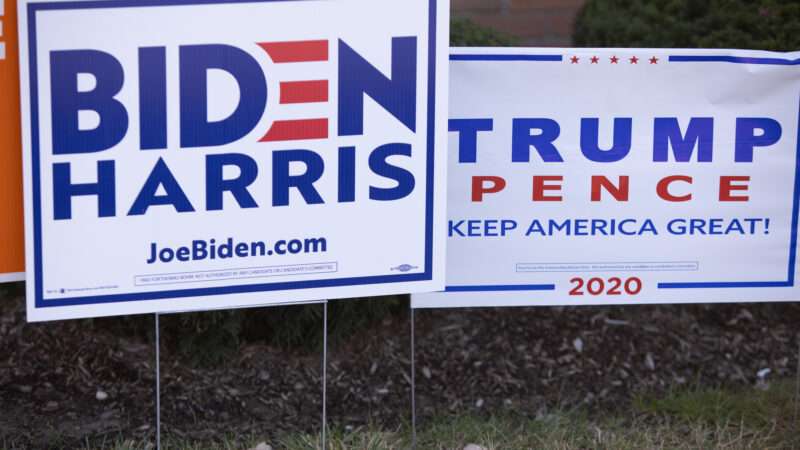 Last week, I argued that President Donald Trump’s own behavior—rather than a vast nationwide voter-fraud conspiracy—caused his election defeat. I’m used to all types of angry responses (and even had ones over the years that required police intervention), but many of the responses have left me more fearful about the nation’s future than I’ve been in a while.

The comments’ tenor were not the problem. Almost everyone who contacted me was remarkably civil, including those who believe that yours truly is a blithering idiot. Differences of opinion are what makes the world go round, but I am worried about the vast differences in the sources that people rely upon—and by the fundamental lack of trust that many people have in the nation’s institutions.

The situation reminds me of one of those science-fiction shows, such as “Man in the High Castle” or “Counterpart,” where two vastly different but similar-looking worlds coexist uncomfortably in their own realities. That’s America, circa 2020.

Let’s look at how debates should work. For example, I’ve repeatedly railed against income-tax hikes. I argue that the state should get its spending in order before taxing us again and taxes depress economic growth. In response, tax supporters argue that the rich don’t pay their fair share. We then look at the numbers and argue over what they mean. We draw different conclusions but accept the premise even if we pick nits with some of the data.

Now imagine having that taxation argument with someone who claims (without a scintilla of evidence) that the Department of Finance is rigging the numbers and that none of its data can be trusted. Or with a person who believes that poor people pay the bulk of state taxes. What if upon seeing evidence to the contrary, that person accuses me of ignoring the TRUTH!!! and directs me to a brilliant but unknown economist Grandpa found on YouTube?

You can see the problem. Regarding the Trump voter-fraud conspiracy, many of us rely on the 38-plus judicial rulings that have thus far rebuked the president’s arguments. We trust the nation’s elections system, which—despite its obvious flaws—has been one of the world’s democratic triumphs. If the president had evidence of systemic fraud, we figure most of that would emerge in the courts.

The ensuing debate would center on specific legal cases and judicial findings. What happens, though, when large numbers of people believe that the entire court system, election process, and federal government are essentially in on the scam? As a libertarian, I’m fully aware of flaws in every political and governmental system, but still believe that sufficient checks and balances exist—and that our system is fundamentally legitimate.

What happens when people believe that most journalists are establishment tools who refuse to report that the election was stolen—perhaps by Venezuelan communists who rigged the electronic-voting software? That particular allegation can be disproven with hand counts, but never mind such petty details. It only proves that I’m listening to “lamestream” media sources rather than seeking out the real truth-tellers.

Many commenters have directed me to little-known web sites with unknowable funding sources and editorial standards, to reports on strange new networks, or bizarre press conferences by people who fall somewhere between “not credible” and unhinged. What can you say when a major political movement (Trumpism) finds it easier to believe that every major American institution is potentially corrupt than it is to think that a president with a history of telling whoppers is being dishonest again?

Conspiracies are like a giant hairball—you yank on one strand, but can never unravel it. On “The Alex Jones Show” recently, former Trump adviser Roger Stone said he has learned of “absolute incontrovertible evidence of North Korean boats delivering ballots through a harbor in Maine,” according to Newsweek. “If this checks out, if law enforcement looked into that and it turned out to be true, it would be proof of foreign involvement in the election.” That would be something.

In Stone’s defense, that’s no crazier than stuff the president posts on Twitter. I used to think the proliferation of sources—including access to primary source material—would save our democracy by empowering people to go around gatekeepers. The biased media system used to limit our voices, after all. In our newly democratized media world, however, Aunt Ethel’s post from some errant numbskull is as credible as a well-researched report in The Wall Street Journal.

A 2018 report from Rand Corporation refers to the situation as “Truth Decay,” which results in “the erosion of civil discourse, political paralysis, alienation and disengagement of individuals from political and civic institutions, and uncertainty over national policy.” That’s putting it mildly. If Americans cannot figure out how to agree on basic facts and restore trust in our institutions, then how long will we remain a peaceful and free society?