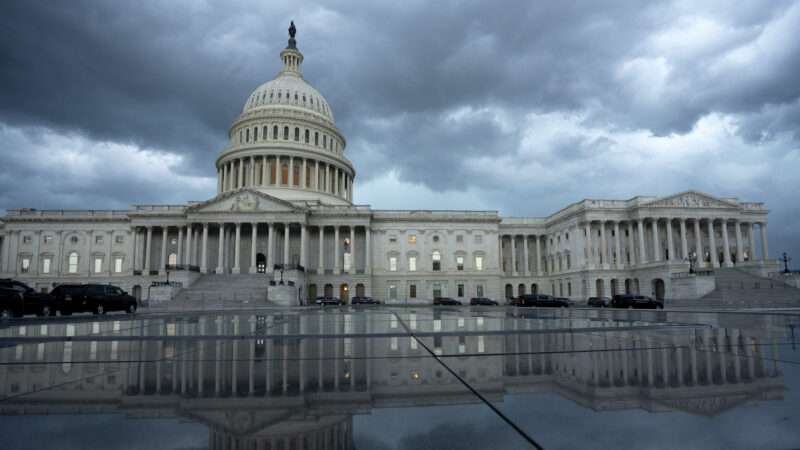 By the end of this week, Congress might pass another massive COVID-19 relief bill aimed at bailing out small businesses and filling the coffers of state and local governments—or the federal government might be heading into another end-of-year shutdown.

That such a wide range of outcomes exists is as much an indication of Congress’ broken and dysfunctional bill-passing procedure as it is a sign of the uniquely weird lame-duck session the government is currently staggering through. With control of the Senate still undecided pending two runoff elections in Georgia next month and President Donald Trump (and many Republicans in Congress) still refusing to acknowledge the result of last month’s election, the unsettled political situation is spilling over into the policy making arena.

Not that Congress needs much help in making a mess of things. A recent track record that includes two shutdowns—along with a few other near-misses—and unprecedented levels of peacetime deficit spending is proof enough of that.

Unlike the late-in-the-year budgets in 2017 and 2018 that caused government shutdowns, however, this year’s must-pass spending bills are complicated by the ongoing pandemic. For months, Congress has debated the passage of another COVID-19 relief bill—with various proposals costing between $500 billion and $3 trillion—without success.

The centerpiece of the latest proposal, a $908 billion package, is the provision that would give $300 per week to unemployed workers—that is a federal boost to whatever state-level unemployment benefits those same workers might also qualify for—extending benefits that are otherwise set to expire later this month. It also includes $160 billion in funding for state and local governments, a scaled down version of the bailout Democrats have been seeking for months. The package includes $300 billion in new funding for the Paycheck Protection Program (PPP), which pays businesses to keep workers on the payroll even if they aren’t working, and $25 billion in housing assistance to help Americans pay rents, mortgages, utility bills, and the like.

Notably absent from the package is another round of direct payments to all or most Americans, like the $1,200 checks sent by the federal government as part of the major relief bill passed in March. Populists on both sides of the aisle, including Sens. Josh Hawley (R–Mo.) and Bernie Sanders (I–Vt.), have called for the inclusion of direct payments even though there seems to be little justification for the federal government to send money to people who have not lost their jobs.

It remains unclear whether the new bill will pass. The latest gambit to get it through Congress, Politico reported Sunday, involves splitting the package into two bills in the hopes that at least one will have enough support to pass the Senate. The $160 billion in aid for state and local governments will be severed from the other proposals under a bipartisan proposal offered by Sens. Bill Cassidy (R–La.) and Joe Manchin (D–W. Va.).

Dividing the massive relief bill into smaller portions makes more sense than asking lawmakers to cast an up-or-down vote on the entire measure. Indeed, the all-or-nothing nature of congressional policy making—in which rank-and-file members are presented with omnibus bills and told to take it or leave it, with little opportunity to offer amendments or build consensus for certain provisions—is simultaneously a recipe for gridlock and for ever-escalating spending, as procedural critics like Rep. Justin Amash (L–Mich.) frequently note.

Here’s a novel approach to resolving outstanding differences among members of Congress on legislative items: Put legislation on the House and Senate floor and let people amend the bill and vote on various ideas. I know, I know. Crazy.

Regardless of what happens with the COVID-19 relief bill, Congress also must pass a bill this week to continue funding the federal government. On Friday, Trump signed a one-week stopgap bill to prevent a shutdown.

The federal spending bill touches on the controversies surrounding the COVID-19 relief bill, with Sanders promising to block its passage unless an aid bill is passed as well.

And because this is Congress, there is plenty of wasteful spending stuffed into the end-of-year budget omnibus bill. The Committee for a Responsible Federal Budget (CRFB), a nonpartisan group that favors balanced budgets, has identified about $100 billion in “debt-financed spending” wrapped into the proposal, including a $60 billion bailout for multi-employer pension plans in financial trouble and a series of gimmicky increases to spending caps for various programs.

That spending “has nothing to do with funding the government, fighting the pandemic, and rescuing the economy,” says Maya MacGuineas, president of the CRFB. “With so many actual needs, even a fraction of that would be inappropriate.”

With so much uncertainty surrounding what could be a very busy end-of-year week for Congress, just about the only thing we can know for sure is that there has to be a better way to do these things.