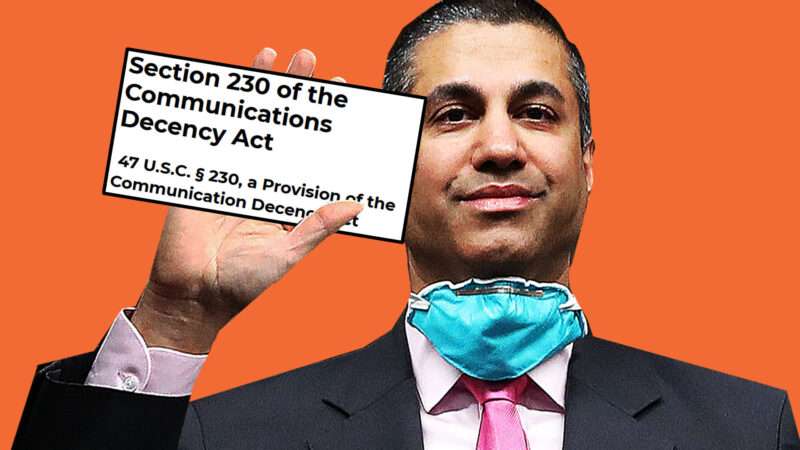 President Donald Trump is willing to veto defense spending unless Congress repeals Section 230, the law that gives internet service providers, website operators, and social media platforms the right to moderate content however they see fit and broad legal liability from content generated by users. President-elect Joe Biden believes that Section 230, often called “the internet’s First Amendment” and the “26 words that created the internet,” should be “revoked immediately.” If Section 230 is repealed or significantly revised, online life will be radically altered.

Enter Ajit Pai, who has served as chairman of the Federal Communications Commission (FCC) since 2017, when Trump appointed him. During his time in office, he has championed deregulation (he repealed Obama-era net neutrality rules), auctioned off record amounts of spectrum, and pushed market-friendly policies for the rollout of 5G networks. Such actions earned him the Sixth Annual Savas Award for Privatization, an annual prize awarded by Reason Foundation, the nonprofit that publishes this website.

In mid-October, after Trump exploded when Twitter and Facebook restricted access to a New York Post story critical of Joe Biden’s son Hunter, Pai announced that the FCC would be working to “clarify” the meaning of Section 230 in the coming weeks. Although he has also announced he will be leaving the FCC on January 20, anything that he does could have a lasting impact.

In an exclusive Reason interview, Pai discusses what he thinks should happen regarding Section 230 and the future of free speech in America. “I am pessimistic about where this goes in the future,” he tells Nick Gillespie. “We’ve grown up…with a culture of free speech and free expression. And I think we’ve often taken that for granted…Once that culture frays, who puts it back together? It’s not going to be a politician. It’s not going to be a regulator. It has to be the aggregated decisions of millions of Americans to say, no, we want pluralism again.”