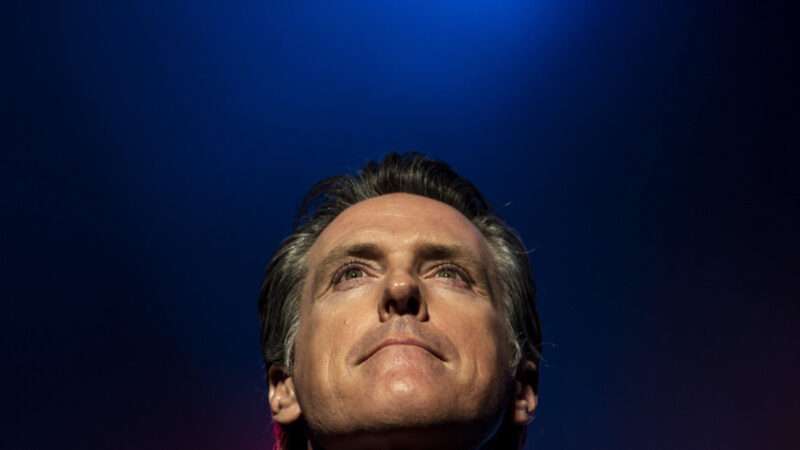 Most of California will be going back into March-style lockdowns following the issuance of a new public health order from Gov. Gavin Newsom (D) that closes large swaths of the economy in regions hardest hit by COVID-19 and places tougher restrictions on businesses allowed to remain open.

The goal of the governor’s new stay-at-home order—which applies to any of the five newly demarcated regions of the state where hospitals’ intensive care unit (ICU) capacity is below 15 percent—is to stem the rise in new cases, and prevent the state’s health care system from being overwhelmed.

But critics say Newsom’s order is full of arbitrary restrictions that will damage small business owners while doing little to stem the spread of the pandemic.

“We are at a tipping point in our fight against the virus and we need to take decisive action now to prevent California’s hospital system from being overwhelmed in the coming weeks,” said Newsom in a press release. “By invoking a Stay at Home Order for regions where ICU capacity falls below 15 percent, we can flatten the curve as we’ve done before and reduce stress on our health care system.”

Under the governor’s order, a raft of new restrictions automatically snaps into place once a region falls below that 15 percent ICU capacity threshold.

That includes the total closure of personal service businesses like nail salons and barber shops, as well as bars, museums, and movie theaters. Restaurants must also cease on-site dining (indoor and outdoor) and switch over to takeout and delivery only. Retailers can be open only at 20 percent capacity. Churches are limited to outdoor service only. Hotels are closed to tourists.

This new order is even more restrictive than the four-tiered, county-by-county reopening framework that Newsom had previously imposed. Under that system, even the most restrictive tier allowed for open nail salons, outdoor dining, and retail to operate at 25 percent capacity.

In a Thursday press conference, Newsom said that he expects four of the state’s five regions—Southern California, Northern California, the San Joaquin Valley, and Greater Sacramento—will all have to adopt these restrictions within about a week. The Bay Area will get there in late December, he said.

Once imposed, the restrictions found in the stay-at-home order will remain in place for at least three weeks. They’ll be extended so long as spare ICU capacity in a region is projected to be below 15 percent.

The reaction from business groups to Newsom’s order has been mixed.

“It’s better than being closed,” says Rachel Michelin, president of the California Retailers Association, of the new 20 percent capacity limit on retail businesses. The fear, she says, was that retailers who’d already had to close down once during the pandemic would have to shut their doors again during the busy holiday shopping season.

“Obviously we’d love to have a higher capacity limit but we’re grateful that our doors, particularly for our smaller retailers in California, can remain open,” Michelin tells Reason.

Other business advocates are a little gloomier.

“This will be a devastating deathblow to already fragile, uncertain, and terrified small business owners,” says John Kabateck, California director for the National Federation of Independent Business (NFIB), citing a survey of NFIB members who report that if economic conditions don’t improve by early 2021, a full 20 percent of them will close permanently.

“A 20 percent rule has a much different effect on small family business than that of a big-box corporate retailer,” says Kabateck. “Removing 80 percent of a small retailer’s selling space is as good as shutting down the small retailer…We want to see the science saying that retail commerce is the cause of the COVID surge.”

Kabateck does credit Newsom for announcing several measures to assist smaller companies earlier this week, including $500 million in grants for distressed businesses and a three-month extension of the deadline for paying sales taxes.

A better solution would be a full reopening of small retailers coupled with social distancing guidelines, he says.

In addition to condemnation from business groups, Newsom’s latest stay-at-home order is sparking resistance from local officials and state legislators.

Los Angeles County Sheriff Alex Villanueva has told reporters that his deputies won’t be enforcing the governor’s new order, and will instead stick to policing “super spreader” events.

NEW: L.A. County Sheriff Alex Villanueva tells me his deputies will not take part in enforcing stay at home orders at businesses, which he says have been through enough. He says that’s the health department’s job, and LASD will focus on “super spreader” events instead. @FOXLA

The sheriffs in San Bernardino, Riverside, and Orange counties have made similar comments.

“We’ve had the worst, most severe business restrictions. We had among the worst, most severe school closures. Yet we’re still at a point where the governor says the situation is so dire, we need to take these radical measures,” says Assembly Member Kevin Kiley (R–Rocklin). “Maybe it’s time to rethink our approach.”

When a new session of the California Legislature begins on Monday, Kiley says he will be introducing a series of bills aimed at reopening the state and paring back the governor’s emergency powers.

That will include one bill reopening schools in the state, and another one preventing state agencies from revoking licenses for businesses that violated pandemic restrictions unless that agency can prove a business was responsible for COVID-19 transmission.

Ultimately, Kiley says, legislators need to take a more proactive role in determining what kinds of pandemic-related restrictions should be adopted, rather than let the governor craft regulations unilaterally.

“I want to see the legislature start to actually vote on these policies. We should have a vote on whether having a lockdown or stay-at-home order is a good idea,” he tells Reason. “The people of California deserve to have a representative process when it comes to these issues of such profound importance to their lives.”

Business owners working with the libertarian Pacific Legal Foundation filed a lawsuit back in October challenging Newsom’s last round of business restrictions on the grounds that he was usurping the state legislature’s authority.

So far, businesses have mostly taken Newsom’s various pandemic regulations on the chin. The more restrictive these regulations become, however, the less patience they’ll likely have for the governor’s central planning schemes.