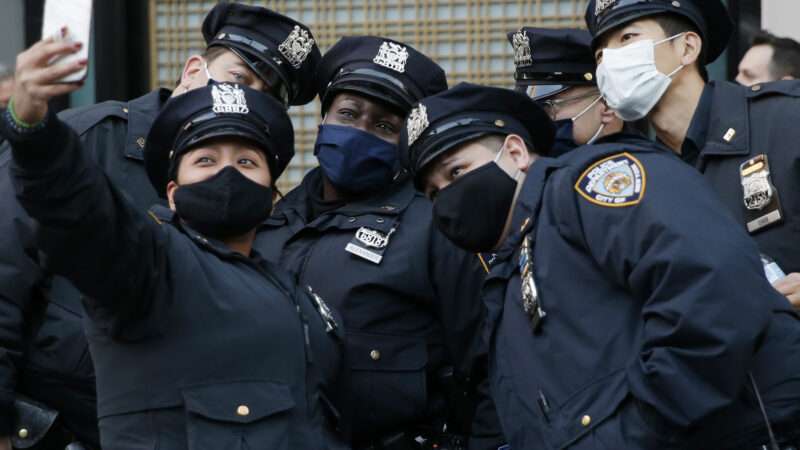 Eager to drive up prostitution arrests in the name of doing something about “human trafficking,” the New York City Police Department (NYPD) doesn’t much care whether any actual violent crime—or even actual prostitution—is taking place. A new investigation by ProPublica examines how the city’s zeal to look tough on trafficking has created yet another avenue for biased law enforcement and means for police to harass nonwhite residents and communities.

In the past four years, only seven percent of New Yorkers arrested for allegedly soliciting prostitution and only 11 percent of those charged with prostitution were white, according to ProPublica.

“Teams of NYPD officers have descended on minority neighborhoods, leaning into car windows and knocking on apartment doors, trying to get men and women to say the magic words: agreeing to exchange sex for money,” write Joshua Kaplan and Joaquin Sapien:

These arrests are based almost entirely on the word of cops, who say they are incentivized to round up as many ‘bodies’ as they can.

Some of their targets were selling sex to survive; others were minding their own business. Almost everyone arrested for these crimes in the last four years is nonwhite, a ProPublica data analysis shows: 89% of the 1,800 charged with prostitution; 93% of the 3,000 accused of trying to buy sex.

Of the dozens of cops, lawyers and other experts ProPublica interviewed for this story, not a single one believes arrest figures for patronizing a prostitute accurately reflect the racial makeup of those who buy sex in New York City.

ProPublica talked to 36 current and former NYPD officers, in addition to “dozens” of people arrested on prostitution charges, and reviewed “hundreds of pages of sealed court records.” They found that—as is typical in these cases, no matter where they take place—defendants were often coerced into pleading guilty to avoid dragging out court dates, legal fees, etc. In cases where defendants did push back, the city often settled.

“Since 2014, the city has paid more than a million in taxpayer dollars to at least 20 people who claimed they were falsely arrested in prostitution or ‘john’ stings,” note Kaplan and Sapien:

Last year, it paid $150,000 to five young Latino men who said they were laughing off a proposition when they were arrested and $20,000 to a West African taxi driver who said in a sworn deposition that he was walking home when a woman asked if he’d walk down the block with her. He told ProPublica he thought she was afraid of walking alone, so he agreed. He was then arrested.

The undercover officer in his case netted 10 arrests in three and a half hours the night she encountered him, earning her four hours of overtime pay.

Eighteen current and former officers who policed the sale of sex in New York City said overtime has motivated them for years. The hours add up over the drive to the precinct, the questioning, the paperwork. “You arrest 10 girls, now the whole team’s making eight hours of overtime,” retired Sgt. Stephen Antiuk said.

Read the whole thing (it gets worse, incredibly) here.

Nonetheless, the impulse that propelled so many writers to blame white women for electing Trump proved strong enough to survive even after the factual basis was undercut. Indeed, left-wing opinion writers continued churning out polemics based on the erroneous 53 percent figure for years. The production line has kept running right through the 2020 elections, which have yielded more shaky early-exit-poll data that has been turned into another round of flagellation of white women for their alleged collective sin.

A Washington Post op-ed by Lyz Lenz, headlined “White Women Vote Republican. Get Used to It, Democrats.,” uses white women’s alleged support for Trump to urge Democrats to stop focusing on winning them. Lenz bemoans “the amount of money and effort that went to flip suburban women, who had no intention of voting Democratic at all, while other groups of voters were taken for granted.”

Lenz’s argument strings together a series of factual and logical missteps, each compounding the last. First, even after acknowledging that the 2016 exit polls showing Trump won white female voters were wrong, she uses the 2020 exit polls anyway. (“Exit polling indicates that Trump’s support had increased among White women.”) Lenz then concedes the figure could, at some point, be “adjusted,” without considering the high probability that the adjustment will in fact negate her premise.

Second, she treats the supposed failure of white women to turn against Trump as a reason Democrats should do less to try to win their votes, while proceeding to treat Trump’s gains among nonwhite voters as a reason Democrats should do more to win their votes. Of course, the whole idea that political parties should ignore constituencies they don’t win is quite odd, but Lenz doesn’t even apply an internally consistent standard to her self-defeating principle.

In other election follow-up news…

Trump called the governor of Georgia to pressure him to subvert the election in his state. Kemp declined, per the Post. https://t.co/88MzybVO6B pic.twitter.com/OshhbGCk1L

• We’re in the Reason Webathon home stretch, and today would be an especially awesome time to give, since we have a matching grant that doubles any donation you make! Click here to donate.

• President-elect Joe Biden has asked California Attorney General Xavier Becerra to be secretary of the Department of Health and Human Services, in a move that bodes well for big government.

• Coming up this week in Congress:

Hell week bears down on Congress

- Coronavirus talks are at make-or-break moment

- Trump threatening to veto NDAA over confederate bases, Section 230 (Congress has not yet overriden a veto) https://t.co/VyWkb9i3Zm

• Even with Trump on his way out, Sen. Rand Paul (R–Ky.) continues to spread fake news on behalf of the Trump administration:

They are not, in fact, coming home.

Even not counting the ones he’s moving next door to continue fighting from there, Trump is going to leave office with more troops in Somalia than Obama did. https://t.co/1EYJVydar9

• It’s 2020, and politicians are still fighting against food trucks?!

• What does it mean to say “libertarianism is consent culture”?