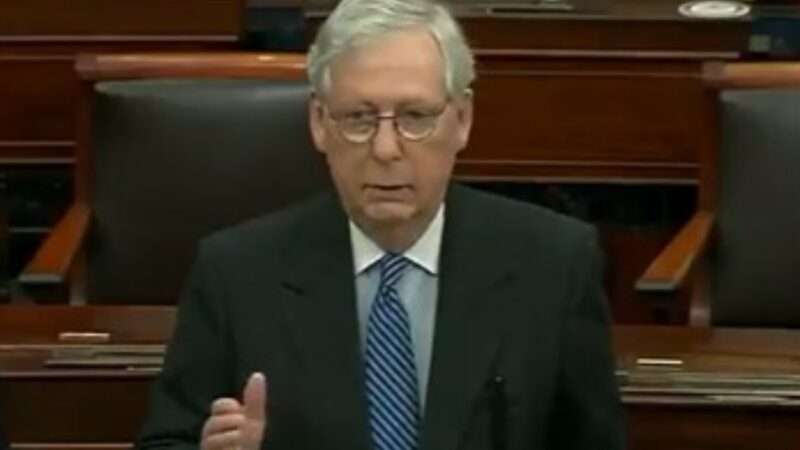 Senate Majority Leader Mitch McConnell (R–Ky.) today finally acknowledged Joe Biden’s victory in the presidential election that was held six weeks ago. “Yesterday electors met in all 50 states,” he said on the Senate floor, “so as of this morning, the country has officially a president-elect and a vice president-elect….The Electoral College has spoken, so today I want to congratulate President-elect Joe Biden.”

That wasn’t so hard, was it? Yet for a month and a half, McConnell had declined to take this step, because he did not want to antagonize President Donald Trump, who continues to insist that he actually won re-election by a landslide, an outcome that would be apparent but for a vast criminal conspiracy that fraudulently denied him his rightful victory. “Allies insisted privately that [McConnell] would ultimately honor the election results, but did not want to stoke a year-end conflict with the president that could hurt the party’s chances in two Georgia Senate runoffs and imperil must-pass legislation,” The New York Times reports.

At least McConnell did not join the more than 100 Republican members of Congress who backed Texas Attorney General’s Ken Paxton’s unsuccessful attempt to stop Biden from taking office by challenging election procedures in four battleground states. The Supreme Court last week unanimously declined to consider Paxton’s lawsuit, which was widely derided by legal scholars as an ill-conceived, poorly reasoned, and unprecedented effort to reverse the outcome of a presidential election by asserting that one state has standing to sue others when it disapproves of their election rules.

Trump was unfazed by that setback, saying the Supreme Court—which includes six Republican appointees, half of them nominated by Trump himself—had “chickened out” because the justices “didn’t want to rule on the merits of the case.” Today he claimed “tremendous evidence” is “pouring in on voter fraud” and repeated his allegation that fraud-facilitating election software helped deliver a phony win to Biden.

Having failed to produce any of that “tremendous evidence” in court, Trump is now holding out the hope that his allies in Congress can give him a second term by challenging the electoral count on January 6. The president is relying on Rep. Mo Brooks (R–Ala.), who refuses to join the “surrender caucus” and plans to “object to the submissions of Electoral College votes from various states that, in my judgment, have such flawed election systems that their vote counts are unworthy of our ratification in the United States Congress.”

Yet the ranks of the surrender caucus continue to grow. “At some point, you have to face the music,” Sen. John Thune (R–S.D.) told reporters yesterday. “Once the Electoral College settles the issue today, it’s time for everybody to move on.”

Sen. Roy Blunt (R–Mo.) said “we’ve now gone through the constitutional process and the electors have voted, so there’s a president-elect.” Biden is “president-elect, subject to whatever additional litigation is ongoing,” Sen. John Cornyn (R–Texas) told CNN. “I’m not aware of any.”

Sen. Charles Grassley (R–Iowa) told the Des Moines Register “the Electoral College met and voted according to our constitutional process.” Asked if that meant Biden should be recognized as the president-elect, he replied that “under the Constitution, that was decided by the Electoral College.” Grassley’s fellow Iowa senator, Joni Ernst, also conceded Biden’s victory. “I know for Iowans it’s disappointing, but the process is what it is, and the Constitution will be followed,” she said.

Even Sen. Lindsey Graham (R–S.C.), a Trump critic turned toady who initially lent credence to the president’s wild claims of massive election fraud, sees the writing on the wall. “I don’t see how it gets there from here, given what the Supreme Court did,” he said yesterday, although he added that “we’ll let those legal challenges play out.”

McConnell, Thune, Blunt, Cornyn, Grassley, Ernst, and Graham (sort of) join at least nine other GOP senators who either congratulated Biden shortly after the election or noted that Trump had presented no credible evidence to back up his allegations of systematic cheating. Sen. Ted Cruz (R–Texas), by contrast, was eager to argue Paxton’s lawsuit before the Supreme Court as a personal favor to Trump. And Sen. Ron Johnson (R–Wis.), who has threatened to join Brooks in challenging certain states’ electoral votes, plans to hold a hearing tomorrow focusing on Trump’s complaints about the election.

Rep. Paul Mitchell (R–Mich.), a retiring congressman who congratulated Biden on November 7, announced yesterday that he was “disaffiliating from the Republican Party” out of disgust at its humoring of Trump’s increasingly desperate explanations for losing the election. “The president and his legal team have failed to provide substantive evidence of fraud or administrative failure on a scale large enough to impact the outcome of the election,” Mitchell wrote in a letter to Republican Nation Committee Chair Ronna McDaniel. “It is unacceptable for political candidates to treat our election system as though we are a third-world nation and incite distrust of something so basic as the sanctity of our vote….If Republican leaders collectively sit back and tolerate unfounded conspiracy theories and ‘stop the steal’ rallies without speaking out for our electoral process, which the Department of Homeland Security said was ‘the most secure in American history,’ our nation will be damaged….With the leadership of the Republican Party and our Republican conference in the House actively participating in at least some of these efforts, I fear long-term harm to our democracy.”