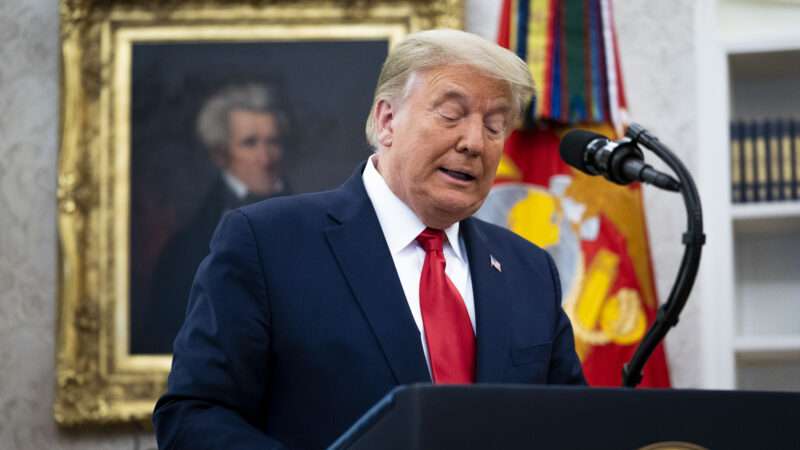 If I argued that a group of highly intelligent, but nefarious aliens invaded the bodies of California’s lawmakers in order to destroy our lovely state, you might expect me to share a little evidence to support those startling claims. The onus should always rest with the promoters of conspiracy theories to prove them true, not with the rest of us to disprove them.

Perhaps California officials embrace inexplicably destructive policy measures because they cling to misguided political ideologies. Maybe there is some other plausible explanation related to the state’s unique culture or politics. We should consider many theories—is it something in the water?—before arriving at extraterrestrial invasions.

Likewise, it’s time for President Donald Trump’s supporters to consider that, quite possibly, there are reasons beyond a vast voter-fraud conspiracy that explain his decisive loss. The president and his legal advocates have argued that Trump actually won by millions of votes, Democratic operatives stuffed ballots (but were too stupid to fix down-ticket races), and rigged electronic voting software.

Maybe those local GOP election officials who dispute those claims were actually helping Biden. A dark, deep-state secret might also explain why the Department of Homeland Security disputed them. It’s hard to prove a negative. I suppose the only reason you dispute my thesis about aliens is that they have also invaded your body. Prove me wrong.

Meanwhile, the judicial system, which still mercifully relies on evidence, has put a damper on the lunacy. Several judges slammed the campaign’s allegations and even Trump’s lawyers have backtracked in court. The Trump team has won two minor victories involving a minuscule number of irregular votes, but it has lost 35 cases.

Obviously, one can always find examples of fraud (and suppression) in any election involving 157 million votes. Governments run elections. They can be inefficient and incompetent. Stating that obvious fact, however, is a long way from proving widespread voter corruption.

“This court has been presented with strained legal arguments without merit and speculative accusations, unpled in the operative complaint and unsupported by evidence,” ruled a Pennsylvania judge last week. “(T)his cannot justify the disenfranchisement of a single voter, let alone all the voters of its sixth most populated state.” The judge has a point—or maybe he was in on it, too.

Trump’s supporters may take solace in these nostrums, but the explanation is obvious. The Democratic ticket simply received more votes than the Republican one. Trumpworld’s disbelief reminds me of that debunked factoid about a New York reporter who, after Nixon won the presidency, supposedly said the outcome was impossible because no one she knew voted for him. Americans need to get out more.

Why did the president lose by more than 6 million votes (albeit by slim margins in several states)? There are two ways to win. Candidates can expand their base and win new supporters, or energize their base and count on an enormous turnout. Trump spent his presidency placating his core constituency, which voted in droves. But Trump’s opponents were even more motivated.

Years ago, a controversial conservative writer named Sam Francis called on the GOP to foment a “Middle American Revolution” that counterbalanced Democratic power in big cities and among minority voters by appealing to the interests of the nation’s mostly white working-class voters. Trump followed that strategy closely, which is how in 2016 he achieved unexpected victories in the previously Democratic-leaning Rust Belt.

This approach explains Trump’s focus on curbing immigration, avoiding military conflicts, promoting tariffs, embracing social conservatism, and heightening the culture wars. I agree with pulling back our international commitments (although Trump’s successes were mainly rhetorical) and a few of his other policy objectives, but I found this agenda to be unnecessarily divisive and, at times, troublingly authoritarian.

Nevertheless, Trump has remade the Republican Party, even as he went down in defeat. By focusing almost exclusively on working-class voters, Trump built support in older, economically depressed regions and in rural America—but he did so at the expense of the nation’s growing suburbs, where voters often turned away from his bluster. Politically speaking, it seemed like a bad trade.

In reality, the president could have appealed to both areas and cruised to a comfortable re-election margin. Many Trump supporters can’t fathom why Republicans did well in congressional races, but lost the presidency. Again, simple analysis is more compelling than a fanciful theory. Many people—myself included—usually vote for Republican legislators, but found one particular Republican officeholder to be unworthy.

We tired of the president’s conspiracy-mongering, whining, incessant tweeting, dishonesty, incompetence, and failure to grow into the office. The president could have tried to, at times, unite the country. He could have reined in his attacks, surrounded himself with truth-tellers rather than sycophants, and reached out to other voters. He didn’t. That’s why he lost. It had nothing to do with fraudulent voting or aliens.