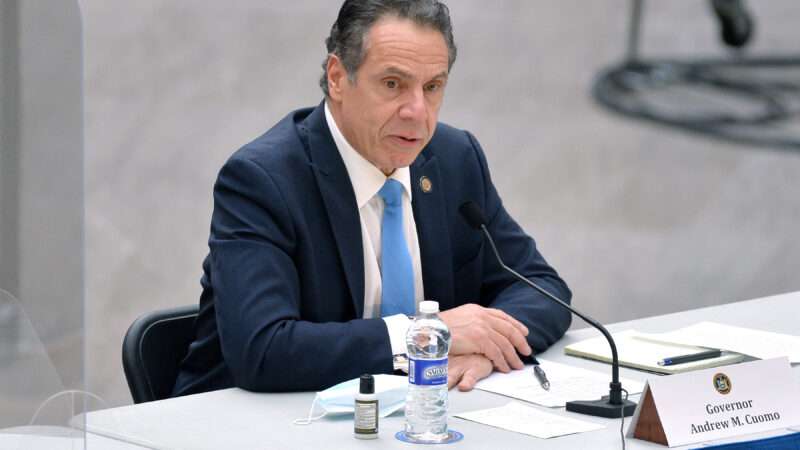 New York Gov. Andrew Cuomo has given hospitals a conundrum. Fail to use all of your COVID-19 vaccines within seven days of receipt? That’ll be a $100,000 fine. Vaccinate someone out of the state-designated order? That’ll be a $1 million fine.

The state’s distribution plan mandated that a slew of people receive the vaccine before the elderly, including health care workers, patient-facing employees at long-term care facilities, first responders, teachers, public health workers, grocery store workers, pharmacists, transit employees, those who uphold “critical infrastructure,” and individuals with significant co-morbidities. Such a plan is common across the U.S., and it requires a robust logistical framework to execute properly.

That hasn’t been going so well.

“States have held back doses to be given out to their nursing homes and other long-term-care facilities, an effort that is just gearing up and expected to take several months,” reports The New York Times. “Across the country, just 8 percent of the doses distributed for use in these facilities have been administered, with two million yet to be given.”

In New York, most individuals over 65 were not eligible to receive the vaccine until recently—when the state graduated to Phase Three of its plan—which partially explains the sluggish rollout. That prioritization, or lack thereof, inspired backlash from politicians and armchair pundits alike, many of whom argued that the elderly should have been first in line to receive the vaccine.

But the state is still struggling to increase the speed at which it administers the shots. Right now, New York’s hospitals have gone through less than half of the doses shipped to them.

That’s a problem. Both the Moderna and Pfizer vaccines can last for several months when frozen but must be thawed before use. And at that point, they have a very limited shelf life.

Of the nearly 900,000 vaccinations sent to New York, only about 275,000 people have received the first dose, or 30 percent. Some states lag even farther behind: North Carolina clocks in at around 26 percent, California at 24 percent, Florida at 23 percent. Kansas is at 15 percent.

But New York leads the way in filling the process with fear and red tape. In Washington, D.C., by contrast, the Department of Health is reportedly encouraging health care providers to administer surplus vaccines nearing expiration to any willing recipient. David MacMillan documented such an experience on TikTok after a pharmacist approached him randomly in a D.C. Giant supermarket with an offer to get the Moderna vaccine.

A similar approach is popular in Israel, which has vaccinated 12 percent of its population with the first dose—the U.S. is at 1 percent—and has moved so rapidly that it is running out of vaccines. They, too, allow the younger population to benefit from extra vaccines. More than 100,000 Israelis between the ages of 20 and 40 have been inoculated.

In MacMillan’s case, he lucked out when two people didn’t show up for their scheduled appointments—something that is bound to happen and is out of health care workers’ control. The pharmacist “turned to us and was like, ‘Hey, I’ve got two doses of the vaccine and I’m going to have to throw them away if I don’t give them to somebody,” MacMillan said on TikTok. “‘We close in 10 minutes. Do you want the Moderna vaccine?’” In D.C., that’s one more person who’s been vaccinated against COVID-19 and one tiny step closer to herd immunity.

Had that happened in New York, the pharmacist might be out of a job.