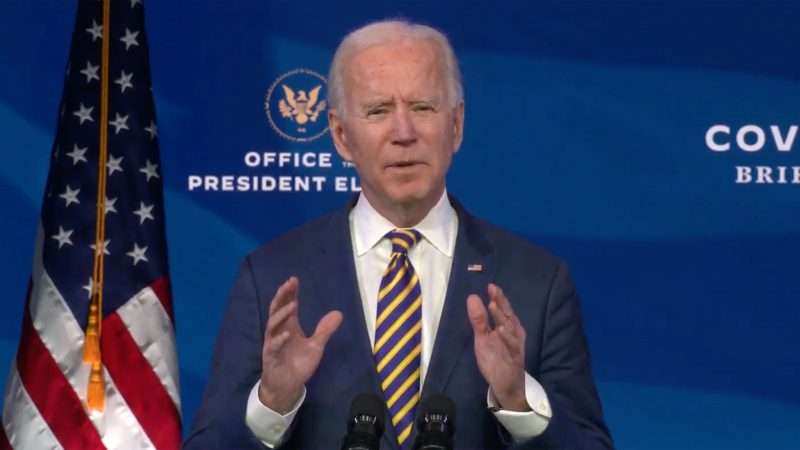 “If I’m your president,” Joe Biden promised at the Democratic National Convention last summer, “on Day One we’ll have a national mask mandate.” Now that Biden is being sworn in as president, his policy has changed from a general requirement to an executive order that applies only on federal property and interstate transportation.

While supporters of a nationwide face mask mandate to combat COVID-19 may be disappointed, constitutionalists should be pleased. The switch is a hopeful sign that Biden acknowledges limits to presidential power, even during a public health emergency.

Until he backtracked in September, Biden had been promising that he would “do everything possible” from “an executive standpoint” to “make it required that people had to wear masks in public.” Outgoing President Donald Trump criticized that plan, saying Biden “wants the president of the United States, with the mere stroke of a pen, to order over 300 million American citizens to wear a mask.”

Trump noted that Biden “does not identify what authority the president has to issue such a mandate.” He warned that it would violate federalism by “stepping on governors throughout our country.”

As Biden now admits, Trump was right. Yet Trump’s defense of constitutional limits sat uneasily with his administration’s nationwide moratorium on evictions, which the Centers for Disease Control and Prevention (CDC) purported to impose in September under the authority granted by the Public Health Service Act.

A regulation issued under that statute says the CDC’s director may “take such measures” he “deems reasonably necessary” to stop the interstate spread of communicable diseases, “including inspection, fumigation, disinfection, sanitation, pest extermination, and destruction of animals or articles believed to be sources of infection.” The CDC argued that evicting tenants who fail to pay their rent would promote the spread of COVID-19 by forcing many of them to “become homeless” or “move into close quarters in shared housing.”

As South Texas College of Law professor Josh Blackman noted, such a broad reading of the CDC’s authority was highly implausible in light of the specific examples cited in the regulation on which the agency was relying. George Mason law professor Ilya Somin likewise warned that the eviction moratorium undermined property rights, federalism, and the separation of powers.

If the CDC can, in the name of disease control, force landlords to house people who do not pay their rent, it can impose pretty much any requirement under that heading—including the mask mandate that Biden now agrees cannot be imposed by the executive branch. Last month Congress extended the eviction moratorium until the end of January, which at least avoids the separation of powers problem, and Biden wants Congress to renew the moratorium through September.

Many critics of the Trump administration’s COVID-19 policies think the federal government should take a more assertive role. Anthony Fauci, director of the National Institute of Allergy and Infectious Diseases, complains that “the states are very often given a considerable amount of leeway in doing things the way they want,” while The New York Times blames the COVID-19 death toll on the lack of “a unified national strategy,” which it says led to a “fractur[ed]” response.

At bottom, that critique is an objection to the American system of government. Under the Constitution, the federal government is limited to specifically enumerated powers, which do not include a general authority to protect the public from communicable diseases.

That responsibility lies primarily with the states, which retain a broad “police power” that goes far beyond the authority vested in the president or Congress. Federalism leaves most decisions in this area to officials who are more accountable and more familiar with local conditions, allows instructive policy experimentation, and avoids concentrating power in a national government whose response to COVID-19 has been characterized by striking incompetence, bureaucratic intransigence, bewildering inconsistency, and lethal foot dragging.

I’m not sure that Biden’s retreat from a nationwide face mask mandate means he appreciates the wisdom of that design. But I hope so.