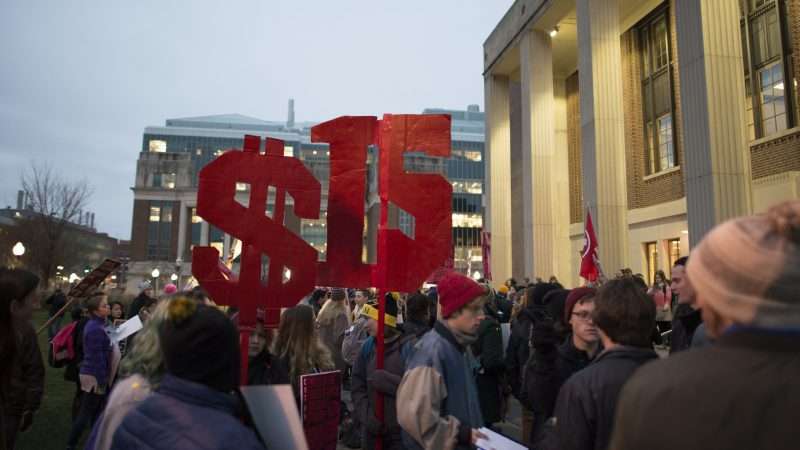 House and Senate Democrats on Tuesday reintroduced a bill to raise the federal minimum wage to $15 an hour by 2025, more than doubling the current $7.25 hourly rate.

The House reportedly plans to include the measure in its upcoming COVID-19 relief legislation. The main problem: That would provide the polar opposite of relief to businesses buckling under the weight of COVID-19 and the associated government lockdowns.

As has been the case over the past year, the congressional aid package is, in part, supposed to resuscitate livelihoods decimated by state-required closures and restrictions. It’s richly ironic that a heightened minimum wage would be yet another mandate that business-owners might need help counteracting. Relief from the relief.

As of September 2020, 100,000 businesses that initially shuttered temporarily were declared dead, a number that has surely expanded through the COVID-19 winter surge. Many other establishments are on their deathbeds. The life support—named the Raise the Wage Act of 2021—could very well do them in, akin to replacing a diabetic’s insulin with a sugary drink and hoping for the best.

The debate around the minimum wage has been muddled by polarized voices on both the left and the right, who struggle to admit that the issue doesn’t fit neatly into a binary. Indeed, studies over the past several years come to entirely different conclusions about the minimum wage’s impact, allowing readers to manipulate the data as they search for the conclusions of their choice.

It was with that mindset that the National Bureau of Economic Research surveyed the existing literature in search of a more concrete understanding. Its main conclusions: There is “a clear preponderance of negative estimates” related to the minimum wage and those effects are “stronger for teens and young adults as well as the less-educated.”

In other words, of course some workers will make more under a higher federal minimum wage. Others, too, will break even or make less as they see their hours reduced, and some still will lose their jobs entirely. The latter group is made up of the lowest-skilled workers—the most vulnerable, and the targets of most Democratic pieces of legislation.

Effects on individual workers and effects on small businesses themselves are, to some extent, mutually inclusive. A stratospheric minimum-wage hike would put yet another financial strain on those businesses, whose owners would have to shoulder a massive increase in labor costs during a time when many entrepreneurs are just hoping they can keep their doors open another day. It might be nice to see a bump in pay, though that benefit evaporates if your employer’s operation no longer exists.

President Joe Biden disagrees. During the final presidential debate, he posited that increasing the minimum wage by more than 100 percent would help small businesses, though he did not explain the particulars. One glaring question: Rural America isn’t operating with the same resources as those in New York City, and states and localities can set their own minimum wages. Why the machete instead of the scalpel?

The bill would also do away with the tipped minimum wage—a lower hourly sum, augmented with gratuity, used in restaurants and other limited service industries. Washington, D.C., attempted to eradicate its tipped minimum in the summer of 2018, though lawmakers overturned that after an outcry from tipped workers themselves, many of whom noted they make far more in tips than they ever would with a minimum wage.

Such a move is particularly inconvenient for this moment, with restaurant patronage hit particularly hard by the pandemic. Danny Meyer, who famously led the way in blitzing gratuities at his New York restaurants, announced in July that he would reintroduce them.

The Democrats’ measure is unlikely to pass in conventional fashion, as it would require the votes of at least 10 Senate Republican to overcome the filibuster. Sen. Bernie Sanders (I–Vt.) said instead that they will pursue a backroad and seek to make it law via budget reconciliation, though the restrictions on that process make success there unlikely as well.