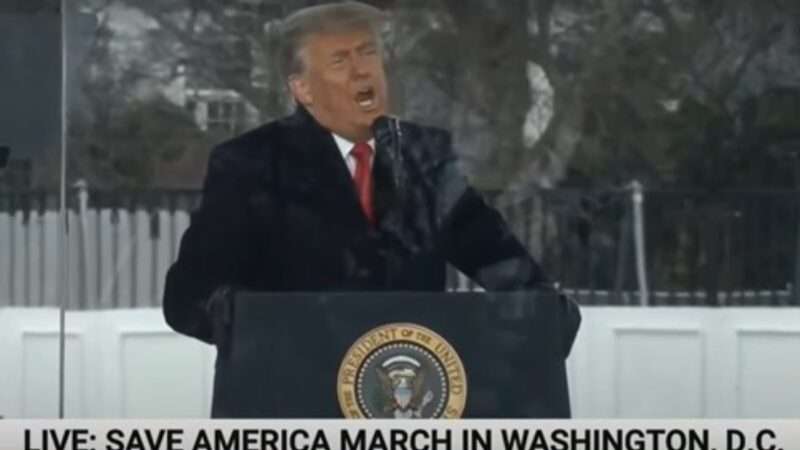 The article of impeachment against President Donald Trump that the House of Representatives is expected to approve tomorrow invokes Section 3 of the 14th Amendment, a little-discussed provision originally aimed at former Confederates. As relevant here, Section 3 says “no person” may “hold any office, civil or military, under the United States,” who, “having previously taken an oath as…an officer of the United States…to support the Constitution of the United States, shall have engaged in insurrection or rebellion against the same, or given aid or comfort to the enemies thereof.”

I understand why House Democrats might want to cite a specific legal provision as justification for Trump’s second impeachment after catching flak for not doing that the first time around. But I’m not sure this is a can of worms we want to open.

Under Section 3, the impeachment article charges, Trump disqualified himself from office by inciting his followers to violently obstruct the congressional affirmation of President-elect Joe Biden’s victory last Wednesday. The article also cites Trump’s “prior efforts to subvert and obstruct the certification of the results of the 2020 Presidential election,” specifically mentioning the January 2 telephone call in which he pressured Georgia Secretary of State Brad Raffensperger to overturn that state’s election results.

Those actions, the article says, “threatened the integrity of the democratic system, interfered with the peaceful transition of power, and imperiled a coequal branch of Government.” Trump “thereby betrayed his trust as President, to the manifest injury of the people of the United States.”

Trump’s conduct last Wednesday, when he inflamed his followers with his oft-repeated fantasy of a stolen election and urged them to “fight like hell” against an “egregious assault on our democracy” that was about to destroy the country, was manifestly outrageous and irresponsible. At the same time, his speech, which on its face advocated nothing beyond peaceful protest, did not qualify as incitement to riot under federal law. Nor did it exceed the bounds of constitutionally protected speech as described in the 1969 Supreme Court case Brandenburg v. Ohio, which said even advocacy of illegal behavior is covered by the First Amendment unless it is not only “likely” to incite “imminent lawless action” but also “directed” at doing so.

Trump’s conversation with Raffensperger, during which he suggested that the secretary of state could face criminal prosecution if he failed to “find” the votes needed to change the outcome of Georgia’s election, was clearly an abuse of power. But it is doubtful whether it violated any criminal statutes, given Trump’s apparently sincere (though utterly groundless) belief that he was trying to correct election fraud rather than encourage it.

None of this means that Trump cannot be impeached for such conduct, since impeachment is not limited to statutory crimes (as even Rudy Giuliani, Trump’s lawyer, has conceded). But is it accurate to say that Trump “engaged in insurrection or rebellion” against the Constitution when he persistently pressed his delusional claim that he actually won the election by a landslide, even after all the states had certified their results?

If so, wouldn’t the Republican members of Congress who supported his cause by objecting to electoral votes for Biden without a plausible argument that they had not been properly certified also be disqualified from office by Section 3? The Washington Post reports that some Democrats “want to use the 14th Amendment against members of Congress who supported the baseless allegations that the election was stolen from Trump and the demonstrations that led to the deadly attack on the Capitol.” Section 3 expressly applies to “senator[s] or representative[s].” Under a broad reading of “insurrection or rebellion,” legislators who use fiery rhetoric while violating their oath to “support and defend the Constitution” (pretty much all of them) would be ineligible to remain in Congress.

The history of Section 3 does not illuminate its reach very much. In a recent paper that he describes as “the first detailed account of Section Three,” Indiana University law professor Gerard Magliocca says the provision “disappear[ed] from constitutional law” after the postbellum controversy over how to treat former Confederate leaders, which began with tough enforcement, followed by congressional amnesties.

But Washington Post reporter Michael Rosenwald describes a subsequent episode that should give pause to those who favor a wide interpretation of Section 3. “In 1919,” Rosenwald notes, “Congress barred Victor L. Berger, a socialist from Wisconsin, from occupying a House seat following his opposition to the United States entering World War I.” The rationale for disqualifying Berger suggests how Section 3 could be abused to punish dissenters.

A special House committee concluded that Berger, “because of his disloyalty, is not entitled to the seat to which he was elected, but that in accordance with the unbroken precedents of the House, he should be excluded from membership; and further, that having previously taken an oath as a Member of Congress to support the Constitution of the United States, and having subsequently given aid and comfort to the enemies of the United States during the World War, he is absolutely ineligible to membership in the House of Representatives under section 3 of the fourteenth amendment to the Constitution of the United States.”

If speaking out against a senseless war counted as giving “aid and comfort” to America’s enemies (which tracks the Constitution’s definition of treason), what unanticipated results might flow from defining Trump’s two-month refusal to admit defeat as “insurrection or rebellion”? While alleging abuse of power or manifest unfitness for office unmoored to specific constitutional or statutory violations also creates a risk of unjustified, politically driven impeachments, the requirement of a Senate supermajority for removal is a pretty good safeguard against that danger. And the latter approach does not open the door to casting out senators or representatives based on differences of opinion.

South Texas College of Law professor Josh Blackman and Seth Barrett Tillman, a lecturer in the Department of Law at Maynooth University in Ireland, argue that Trump cannot be impeached based on his constitutionally protected speech. George Mason law professor Ilya Somin disagrees, because “high government officials don’t have a First Amendment right to be protected from firing based on their political views.” That principle, he says, “applies to presidents facing impeachment no less than other officials.”

Somin’s argument that presidents can be fired for speech that would not justify criminal prosecution comports with the more general understanding that impeachment is an appropriate remedy for serious presidential misconduct even when it does not technically violate the law. I think that is what we have in this case.