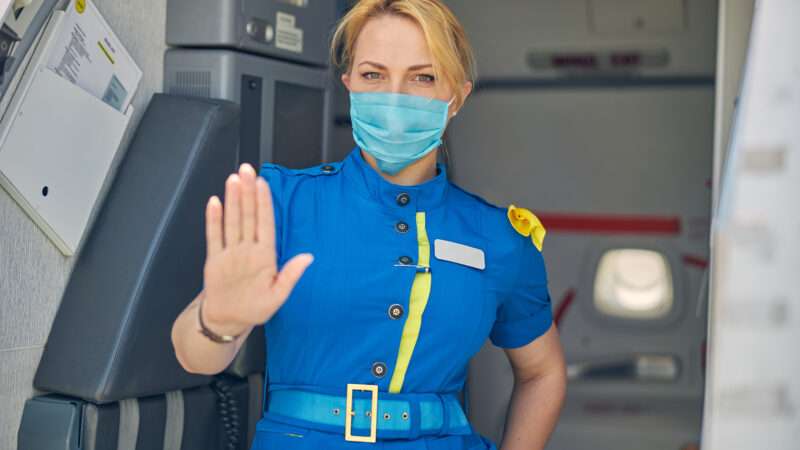 Democrats are urging the federal government to do everything in its power to prevent people present at Wednesday’s riot on Capitol Hill from ever boarding a plane again, including adding their names to the FBI’s infamous no-fly list. A number of misleading viral videos on social media have meanwhile given the impression that this crackdown on participants in last week’s “Stop the Steal” rally-turned-riot is well underway.

On Monday, Reps. Peter DeFazio (D–Ore.) and Rick Larsen (D–Wash.)—both members of the House Committee on Transportation and Infrastructure—penned a letter urging Federal Aviation Administration (FAA) head Stephen Dickson to use whatever powers he has to “detect instances in which those connected with last Wednesday’s attack or their sympathizers may attempt to travel by air again to Washington, D.C.” and to “prevent seditionists from jeopardizing aviation safety if they do board aircraft.”

That would include slapping passengers who interfere with flight attendants with the maximum allowable $35,000 in civil fines and potentially referring these unruly flyers to the Justice Department for criminal prosecution, their letter reads.

DeFazio and Larsen also asked Dickson to work with airlines to “limit the chance that the Nation’s commercial airline system could be used as a means of mass transportation to Washington, D.C., for further violence in connection with the inauguration.”

Their letter comes just a few days after Rep. Bennie Thompson (D–Miss.) issued a statement demanding that the FBI and Transportation Security Administration (TSA) add anyone who’d even entered the Capitol building during Wednesday’s riot to the no-fly list.

“I am urging the [TSA] and the [FBI] to use their authorities to add the names of all identified individuals involved in the attack to the federal No-Fly List and keep them off planes,” said Thompson, who chairs the House Committee on Homeland Security, in a press release. “This should include all individuals identified as having entered the Capitol building—an intrusion which threatened the safety of Members of Congress and staff and served as an attack on our Nation.”

On the very day of the riot, the Association of Flight Attendants-CWA (AFA) similarly demanded that protesters who were present at the Capitol be barred from flying.

“Some of the people who traveled in our planes yesterday participated in the insurrection at the Capitol today,” said AFA President Sara Nelson. “Acts against our democracy, our government, and the freedom we claim as Americans must disqualify these individuals from the freedom of flight.”

Viral videos on social media meanwhile purport to show Trump supporters being booted from flights or prevented from boarding because of their participation in Wednesday’s riot. Often these videos are accompanied by captions saying those being kicked off planes have been added to the no-fly list. The #noflylist hashtag went viral on Twitter on Monday.

A few of these videos—like one tweeted out by Bishop Talbert Swan that’s garnered just under 900,000 views—are several years old and have nothing to do with the events at the Capitol on Wednesday.

This video is from 2018 and has nothing to do with the Capitol riot https://t.co/rz42Zr9R2E https://t.co/yapRMOvLEo

Other videos instead show people who’ve been kicked off flights for not wearing masks and/or engaging in disruptive behavior, including one popular clip showing a weeping man in an airport complaining about being labeled a terrorist.

Just like the other TikTok I just quote tweeted, this has nothing to do with the US Capitol Building or no-fly lists as it relates to domestic terrorism.

This man, according to the woman who filmed it, was kicked off the flight for not wearing a mask. https://t.co/dBoz18uXUd

On Thursday, 14 passengers on an Alaska Airlines flight from Washington, D.C. to Seattle were banned from future flights by the airline after refusing to wear masks. That ban is in effect so long as the airline requires passengers to wear masks, according to USA Today.

In a Monday evening statement, TSA spokesperson Robert Langston said that people on the no-fly list can’t be issued boarding passes, and that a boarding pass is needed to get past airport security checkpoints.  Thus, people already in their seats or at the gate—like most of these supposed rioter in these viral videos—are probably not getting the boot for being on the no-fly list.

The FBI’s Terrorist Screening Center is responsible for maintaining the federal government’s No Fly List. Agencies like TSA then use that list to vet passengers trying to board planes.

When asked by Reason whether those present at the Capitol during Wednesday’s riot had been added en masse to the no-fly list, a TSA spokesperson said that “for security reasons we do not discuss the details other than to confirm that there are always multiple layers of security in place” and that “we will accommodate FBI requests and congressional authorizations related to no fly lists.”

It’s obviously within airlines’ purview to kick off customers who are disruptive or violate company policies about wearing masks on flights. But trying to add people who were merely present at the Capitol last Wednesday to the FBI’s no-fly list, as Democrats are requesting, raises some serious civil liberties concerns, says Patrick G. Eddington, a research fellow at the Cato Institute.

“Clearly, anyone with an outstanding arrest warrant for the commission of a federal crime would absolutely qualify for inclusion on the official ‘No Fly’ list,” Eddington tells Reason. But “if the person in question entered the Capitol without actually committing a violent act, property destruction, etc., I think putting that person on the “No Fly” or TSA’s “Quiet Skies” selectee list would be wholly incompatible with the [Fourth] Amendment.”

Eddington notes that the FBI has a long history of placing people on the no-fly list who’ve never been accused of a crime. A simple typo can see a person wind up on the list. Up until a few years ago, the government wouldn’t even confirm whether someone had been placed on the no-fly list, let alone offer reasons for why his right to fly was being restricted.

The American Civil Liberties Union (ACLU) has challenged the constitutionality of the no-fly list in multiple lawsuits with mixed success.

In 2014, the group scored an initial victory when a U.S. district court told the federal government it had to tell people if they were on the no-fly list and give them an opportunity to challenge their placement there.

In 2019, the U.S. Court of Appeals for the 9th Circuit sided with the government in another lawsuit brought by the ACLU in which the group argued the government’s new system of notifying people and allowing them to challenge their placement on the no-fly list was still falling short of what the Constitution requires.

After the Pulse nightclub shooting in Orlando, lawmakers from both parties floated proposals to prevent people on the no-fly list from possessing firearms.

“Our nation’s watchlisting system is error-prone and unreliable because it uses vague and overbroad criteria and secret evidence to place individuals on blacklists without a meaningful process to correct government error and clear their names,” said the ACLU at the time in opposition to those efforts.

“I realize that feelings are running very high right now as a result of the insurrectionist mob assault on the Capitol,” says Eddington. “But it’s exactly in times of stress like this that lawmakers and the public usually make bad, constitutionally-violative choices, which is why cooler heads and common sense need to prevail here.”

But with even more “Stop the Steal”-type events planned in D.C. for President-elect Joe Biden’s inauguration, there’s a real possibility that more violence will only cement lawmakers’ desire to redirect blunt war-on-terror-era tools to combat the threat posed by right-wing street mobs.

History would suggest the cooler heads are at a disadvantage in resisting this.