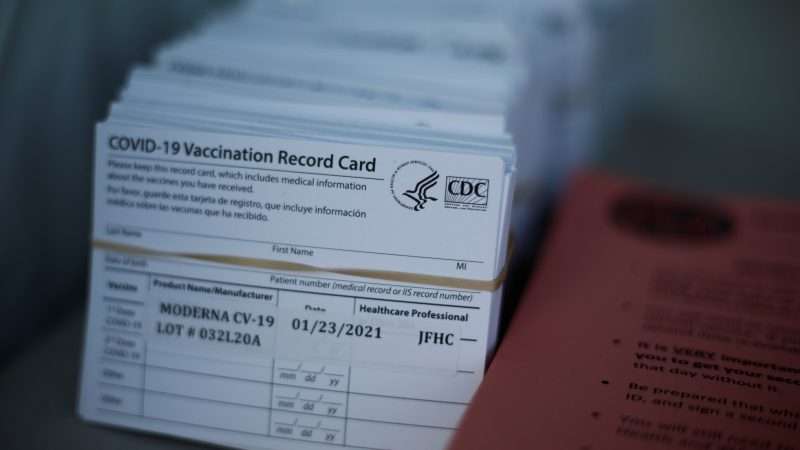 States have many factors to consider when allocating their scarce vaccine doses: the age of recipients, medical conditions that put people at risk, and jobs that put workers in contact with the public, to name a few. A committee in Oregon is considering an unusual recommendation to allocate vaccines by race. The proposal is intended to address inequities but would invite legal challenges to a vaccination program that has already been off to a rocky start.

The state’s COVID-19 Vaccine Advisory Committee is a group of 27 individuals tasked with devising “a vaccine sequencing plan focused on health equity to ensure the needs of systemically affected populations, including communities of color, tribal communities and people with intellectual and developmental disabilities, are met.” The committee’s members include representatives from health providers as well as community groups such as the Oregon Pacific Islander Coalition and the Somali American Council of Oregon. Although decision making responsibility ultimately lies with the Oregon Health Authority and Governor Kate Brown, the state has pledged to follow the committee’s recommendations.

The committee concluded its first meeting in early January unable to agree even on endorsing the efficacy of coronavirus vaccines. (Both the Moderna and Pfizer/BioNTech vaccines are remarkably effective.) At the most recent meeting on January 21, the committee deliberated who should be next in line for vaccinations after healthcare workers, senior care residents, teachers, and several other groups.

The committee appears poised to prioritize allocation based on race, perhaps even ahead of those with chronic medical conditions. The Oregonian reports that when some members suggested prioritizing residents with relevant health conditions, a committee member representing a Native American group alleged that the committee was “dealing with our own conditioning of white supremacy as it is showing up in our decision making.” Black, indigenous, and other people of color (often abbreviated “BIPOC”) made the committee’s tentative list, with their priority vis-a-vis Oregonians at risk from chronic medical conditions to be determined later.

The committee’s next meeting is on Thursday and if it commits to this plan, the Oregon Health Authority will have to consider whether it can be implemented legally. Walter Olson, a senior fellow at the Cato Institute, has argued that explicitly prioritizing race in vaccination decisions would run afoul of the Equal Protection Clause. “This runs into the Fourteenth Amendment to the Constitution, which says citizens of all races are entitled to the equal protection of the laws,” he writes in a recent article. “The Supreme Court has long interpreted this to mean that the government may ordinarily not dole out valuable benefits, or impose harms, based on a citizen’s race.”

Access to vaccines is certainly a valuable benefit, one that Olson predicts would receive strict scrutiny from courts. Unless narrowly tailored, writes Olson, such plans would be unlikely to be approved by judges.

Gail Heriot and Peter Kirsanow, both members of the U.S. Commission on Civil Rights, raised similar concerns with the Department of Veterans Affairs in December. They warned that a federal proposal to prioritize vaccinating minority veterans would face a “very tough standard” in court, potentially undermining the plan’s legal viability.

Such concerns should be front of mind given that the state currently has nearly $9 million in federal COVID relief funds tied up in similar litigation. The money is part of a fund that the legislature set aside for black business owners. The plan was challenged on equal protection grounds, resulting in a court freezing the remaining money until the litigation is resolved. By the time that happens, it may be too late to help affected businesses that would have benefited from relief. It’s easy to imagine similar legal challenges to any plan to prioritize vaccinations by race. If they succeed in court, the state’s vaccination plans could be significantly disrupted.

Anticipating these legal issues is not to deny the reality of health inequalities. The pandemic truly has hit racial minorities disproportionately hard. This is due to a variety of socioeconomic factors––more exposure at work or home, less access to testing and healthcare, greater rates of complicating medical conditions, and higher rates of incarceration. Inequalities in vaccine distribution threaten to exacerbate these disparities. In Texas, for example, early vaccination sites were concentrated in predominantly white, affluent areas, disadvantaging poor and minority populations who often also lack access to transportation. Oregon’s committee wants to avoid that outcome.

Legally, however, states would be on more secure ground targeting those disparities directly than by allocating vaccines explicitly by race. “For strategies that would increase the allocation ratio above that proportionate to the population, the Supreme Court is likely to uphold racially neutral vaccine allocation criteria, which are designed to capture worse-off minorities but not explicitly,” suggests a recent article in the Journal of the American Medical Association. “A vaccine distribution formula, therefore, could lawfully prioritize populations based on factors like geography, socioeconomic status, and housing density that would favor racial minorities de facto.”

An official with the Oregon Health Authority suggested a similar approach at the most recent committee meeting, but The Oregonian reports “[that] idea didn’t seem to get much traction with the group.” If the members commit to explicitly prioritizing the BIPOC population, it will put the state in the difficult position of choosing between disregarding the recommendation of its own equity committee or risking a legal challenge that could throw vaccine distribution into chaos.

Even if legally permissible, it’s far from clear that the committee’s recommendations would be the most effective strategy for minimizing loss of life. New modeling published in Science concludes that under most realistic scenarios, the best way to reduce mortality is to prioritize vaccinating older adults. Depending on how the committee ends up prioritizing various groups, demands for equity may be in tension with the goal of preventing deaths.

As Liz Wolfe reported for Reason last week, Oregon is already bucking advice to vaccinate the elderly first by putting teachers at the front of the line, with the aim of reopening schools in February. (We’ll see if that actually happens; around the country, teachers unions have resisted reopening.) Unlike other states, Oregon has also denied health providers permission to give soon-to-be-expired doses to anyone available, which ensures that valuable doses do not go to waste. In one of the few high points for the Oregon vaccination program, in which surplus vaccines were used to immunize vulnerable inmates, the state regretfully attributed the decision to a miscommunication.

Oregon should aspire to treat marginalized groups fairly, ensuring that they are provided with access to vaccinations; the advisory committee can play a valuable role holding the government to account on these goals. But the experience of other jurisdictions suggests that flexibility is key to rapidly putting vaccines to use. Oregon should focus less on vaccinating people in a rigidly dictated order and more on immediately vaccinating the most vulnerable groups, such as the elderly and those with chronic health conditions. Doing so would by itself help to address racial inequalities in healthcare while avoiding the legal perils of allocating doses by race.

Fortunately, the recommendations of Oregon’s vaccine advisory committee are non-binding. If they proceed to call for explicitly prioritizing vaccinations based on race, the state should thank them for their service, set their recommendation aside, and proceed independently with strategies to legally, effectively, and rapidly put vaccines to use to maximize their life-saving potential and bring the pandemic to an end.