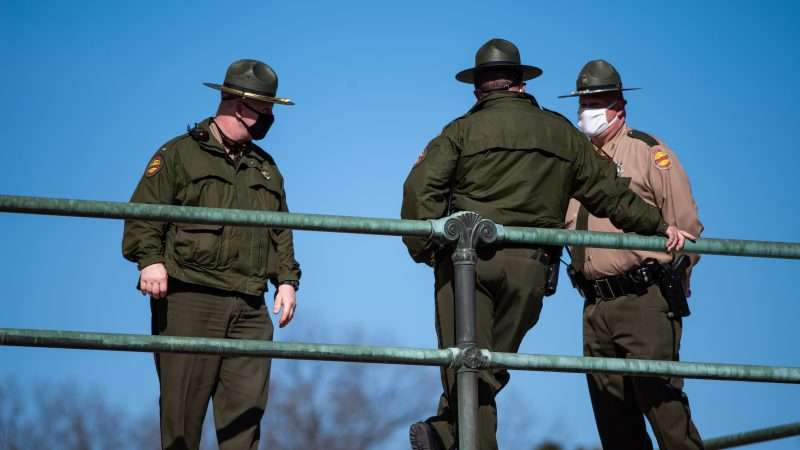 The Dickson County Sheriff’s Office, following an investigation by the Tennessee Bureau of Investigation (TBI), arrested and charged Joshua Garton with harassment after Garton posted a picture to Facebook that appeared to show two men desecrating the tombstone of Sgt. Daniel Baker, who was shot and killed on duty in 2018. Garton was held on a $76,000 bond.

While the picture was in poor taste, constitutional experts say law enforcement violated Garton’s First Amendment rights by arresting him for the image.

“The First Amendment clearly and unmistakably protects this man’s right to post an offensive photo about a police officer,” says Daniel Horwitz, a Nashville civil rights attorney. “The only people who broke the law here were the police officers and TBI agents who participated in this flagrantly unconstitutional arrest.”

The picture Garton posted is in fact a doctored photo of the cover of “Pissing on Your Grave,” a single by The Rites, which originally depicted two people urinating on the tombstone of punk legend GG Allin.

This is the photo that our constitutionally illiterate law enforcement officers think is a crime to share. pic.twitter.com/jOBJZBaeGF

It’s unclear how a dead person can be criminally harassed under Tennessee law, which requires that the subject be “frightened, intimidated or emotionally distressed.” Rather, Garton committed the unwritten crime of hurting a police officer’s feelings, also known as “contempt of cop.”

For example, in 2019 an Iowa man won a lawsuit after he was charged with third-degree harassment for saying online that a sheriff’s deputy was a “stupid sum bitch” and “butthurt.” (In hindsight, the latter seems undeniably true.)

Then there’s the San Diego Police Department, which issued more than 80 tickets over the last decade for “seditious language” under an unconstitutional World War I–era law. The Voice of San Diego reported that the majority of the tickets were issued to minorities for allegedly using vulgarities.

Another Tennessee resident was arrested in 2017 after he wrote “Erin’s police chief is a bitch” in white paint on the back of his car.

There’s a wide body of case law upholding the right to flip off police officers, but despite this, arrests and tickets are still meted out to people who hurt cops’ feelings by giving them the finger. Just this month, the Eight Circuit Court of Appeals denied qualified immunity to a Minnesota police officer who pulled over and arrested a man for flipping her off.

A spokesperson for the Tennessee Bureau of Investigation directed a request for comment to Crouch’s office.