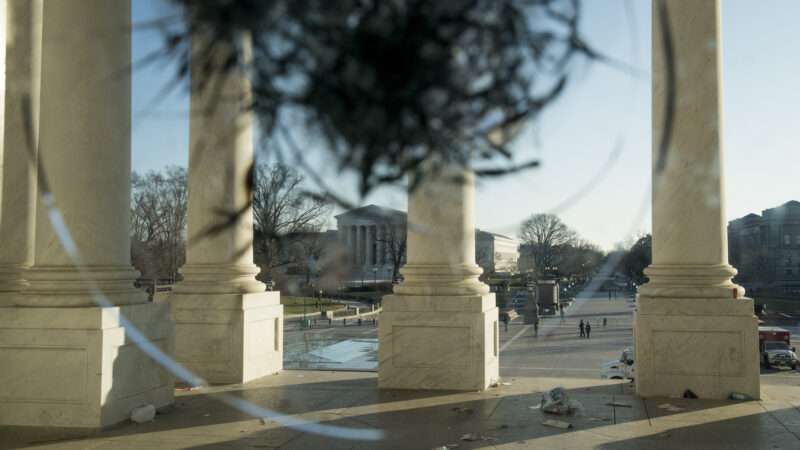 As Americans deal with the aftermath of the Trumpist riot and invasion of the Capitol on January 6, a difficult question looms for the citizens of a troubled republic: How do you maintain a political system when much of the population ceases to believe in its underlying principles? The problem is not just President Donald Trump—whose petulant refusal to accept his loss at the polls set the grounds for the violence that disrupted Congress’s count of Electoral College votes—but also his cultists who are more interested in maintaining one thuggish politician in power than they are in how power is acquired and used. Beyond them are all too many Americans who have come to believe they can’t afford to lose elections.

This moment didn’t drop out of the blue. The country has suffered growing political polarization, harsh feelings between the political factions, and an increase in political violence in recent years. We saw that in the 2017 ambush of Republican members of Congress and their protective police detail, the violent “Unite the Right” rally in Charlottesville, Virginia, and the litany of riots that started as demonstrations against abusive law enforcement before taking on a life of their own.

Those concerns grew as the election loomed. “We are increasingly anxious that this country is headed toward the worst post-election crisis in a century and a half,” wrote Larry Diamond of the Hoover Institution, Lee Drutman of New America, Tod Lindberg of the Hudson Institute, Nathan P. Kalmoe of Louisiana State University, and Lilliana Mason the University of Maryland in an October 1 piece in Politico. “Our biggest concern is that a disputed presidential election—especially if there are close contests in a few swing states, or if one candidate denounces the legitimacy of the process—could generate violence and bloodshed.”

They had good reason to fear a disputed election. “About three in 10 (29 percent) Republicans say it would be appropriate for President Trump to refuse to leave office because he claims that he has credible evidence of illegal voting,” the Democracy Fund Voter Study Group warned last summer. “On the other hand, 57 percent of Democrats say that it would be appropriate for a Democratic candidate to call for a do-over election because they claim to have credible evidence of interference by a foreign government.”

The election results didn’t exactly sweep in an era of good feelings. Twenty-four percent of likely U.S. voters “think Biden voters are America’s biggest enemy as 2020 draws to a close,” Rasmussen Reports noted early in December. “Nearly as many (22%) regard Trump voters as the biggest enemy.”

It’s tempting to suggest that the Trumpist rioters in D.C. did a credible job of fulfilling their detractors’ fears. But that overlooks the evidence from sources like the Democracy Fund Voter Study Group that neither dominant political tribe was prepared to accept a loss. Even the Biden-aligned Transition Integrity Project—which anticipated Trump’s bogus claims of electoral fraud and unwillingness to concede—also warned of political chaos if Biden’s supporters were disappointed. In the end it was the current president’s fans who rioted, but an uneventful tally of ballots didn’t appear to be in the cards.

Elected officials, like Trump, who defy constitutional constraints and sheer reason can be removed from office at the polls, by impeachment, or by processes such as those outlined in the 25th Amendment. But what do you do when many voters themselves think the only legitimate elections are those that they win?

One important step would be to make elections less consequential so that Americans aren’t so fearful of the instruments of government in the hands of their enemies.

“It is more and more dangerous to lose an election,” economist John Cochrane, a senior fellow of the Hoover Institution and an adjunct scholar of the Cato Institute, wrote in September. “Regulation has supplanted legislation, and dear colleague letters, interpretations, and executive orders have supplanted regulation… The vanishing ability to lose an election and not be crushed is the core reason for increased partisan vitriol and astounding violation of basic norms on both sides of our political divide.”

For example, Trump threatened that companies which displease him “will be taxed like never before” as punishment. He led supporters in chants of “lock her up” aimed at his 2016 opponent, Hillary Clinton. His opponents have had every reason to fear that his tenure in office constitutes a real danger.

On the same note, New York Gov. Andrew Cuomo strong-armed financial institutions into denying services to his political opponents in what the American Civil Liberties Union called a threat to “the First Amendment rights of all organizations to engage in political advocacy without fear that the state will use its regulatory authority to penalize them for doing so.” The vast power he wields is perilous to people with whom he disagrees.

In its reach into all areas of life, government in modern America increasingly resembles what the Israeli historian J. L. Talmon called “totalitarian democracy.” This approach “treats all human thought and action as having social significance, and therefore as falling within the orbit of political action.” Since there’s no room for going your own way, contests for political power necessarily become existential fights that nobody can afford to lose.

By contrast, wrote Talmon, liberal democracy “recognizes a variety of levels of personal and collective endeavour, which are altogether outside the sphere of politics.” If most of life is under the control of the people living it rather than subject to the whims of government officials, losing elections is disappointing, but not catastrophic. To lower the political stakes, we need much more of our thought and action to be “altogether outside the sphere of politics.”

What does remain within the political sphere should be decided as locally as possible. Centralized decision making sets the stage for conflict in a vast country of diverse values and preferences. During the Trump presidency, his opponents spent much time and energy complaining that the Constitution gives his rural supporters too much power through the Electoral College and the Senate. With Biden in the White House, we’re bound to hear renewed griping about the cultural and economic dominance of urban liberals. While tension between dissimilar groups is inevitable, it doesn’t have to be poisonous—if those groups aren’t battling to dominate each other.

So, while we’re expanding the realm of human life that’s beyond the reach of government, much of what it does should be devolved down the political food chain, closer to the people who are affected, to reduce the likelihood of subjecting them to policies they despise. Ideally, as much decision-making as possible should be returned to individuals.

None of this guarantees that the Trumpists who stormed the Capitol, or any other Americans who no longer believe in the peaceful transition of power, will suddenly regain faith in vote counts. But making election wins and losses less important should lower the political tensions that are consuming the country. And that might give us all a little necessary breathing room while we figure out, once again, how to get along with one another.