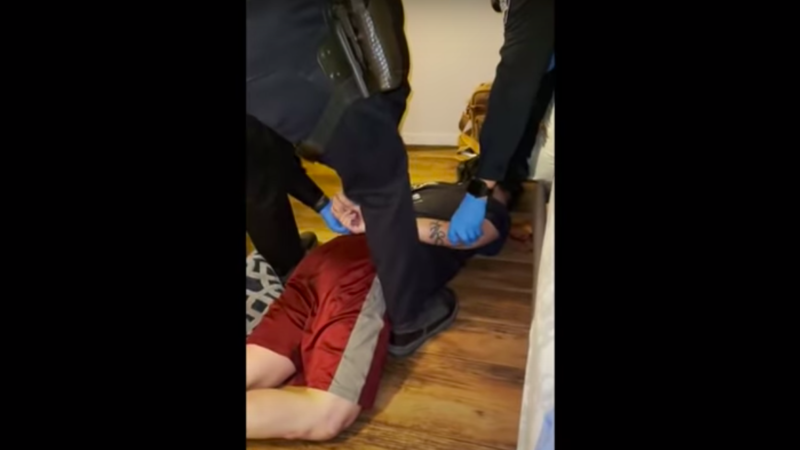 When the mayor of Antioch, California, found out about the December police killing of 30-year-old Antioch man Angelo Quinto, it wasn’t from the police department. He learned of it the same way many others did: on the internet.

“I did not know when he passed away that the city had activated what we call ‘protocol,’” Mayor Lamar A. Thorpe tells Reason in an interview. “I did not know that he died until a week later, when I learned about it through social media posts. That should never be a way that I find out this kind of information.”

The police department would not confirm the death to the public until more than a month had passed, after the East Bay Times probed them on it.

On December 23, cops responded to a call from Isabella Collins, Quinto’s sister, who reported a mental health crisis. A wrongful death claim filed by the family against the city of Antioch mentions that Quinto twice made a plea upon seeing the officers: “Please don’t kill me,” he said. He would be dead just moments later, after the cops knelt on Quinto’s neck for five minutes, according to the suit.

The claim notes that Quinto “had been suffering from depression, anxiety, and paranoia for the previous few months” and that the evening of December 23 brought on an episode of paranoia. “What are you doing?” he kept asking people in the house, following them as he feared they would leave him alone. Quinto’s sister phoned the police for help; Quinto’s mother, Maria Quinto-Collins, calmed her son by sitting with him on the floor as she held him “onto her chest with her hands clasped behind his back.”

Upon arriving, the officers removed him from Quinto-Collins’ arms and put him on the floor before one placed his leg on Quinto’s neck. “This is what we do to keep them calm,” he said.

That cop eventually got fatigued, and so the second officer replaced him, at which point Quinto began to bleed from his mouth. “At no time while being restrained did Mr. Quinto resist physically or verbally,” the suit says.

Video footage taken by Quinto-Collins shows police turning over her lifeless son to reveal blood dripping on his chin as they try to shake him awake. “What happened?” Quinto-Collins asks. “Please, please…What is happening? Does he have a pulse?”

Quinto was later transferred to a hospital, where he died three days later.

Antioch Chief of Police Tammany Brooks did not respond to a request for comment. In a recent press conference, which was convened to address another recent police killing, he said they were continuing their investigation.

It’s an investigation that the public may never have known about if the police department, which attempted to conceal the death from both lawmakers and community members, had its way. Quinto’s death is evocative of George Floyd’s, the man who perished in May 2020 after a Minneapolis police officer knelt on his neck for eight minutes, spurring a robust debate on police accountability and viable alternatives to excessive force.

“Drugs were not involved,” Benjamin Nisenbaum, a lawyer in the wrongful death claim, said at a press conference. “Even if they were, you’ve got a case where the family called police to help them. And they killed him. Police have to do a better job than that.” In that vein, the Quinto family also plans to file a federal lawsuit, though they may face an uphill battle thanks to qualified immunity. The legal doctrine makes it an onerous task to bring civil suits against public officials, requiring that any alleged misconduct be outlined with near-exacting precision in previous case law. In practice, it has protected a cop who shot a 10-year-old, a cop who shot a 15-year-old, and two cops who assaulted and arrested a man for standing outside of his own house, among others.

Thorpe introduced a slew of police reforms on Monday in line with his mayoral campaign promises. One is particularly relevant: the use of body cameras, which the Antioch officers were not wearing on that December evening, as the department has historically resisted their implementation.

“I learned that we were exploring body cameras in 2017,” says Thorpe, who was then a city council member. “At that point, the prior chief told the council that at that moment he needed more time to examine and explore the issue. And so we said, ‘Thank you. Go explore and get more information.’ Well, four years later, we never got more information.”

Thorpe may face a predictable opponent in pushing for change: the local police union, with which he already has somewhat of a thorny working relationship.

“Voters may have received a mailer from Mayor candidate Lamar Thorpe claiming he is for greater law enforcement efforts in Antioch. THIS IS NOT TRUE,” reads a letter from the Antioch Police Officers’ Association to the community in the run-up to the 2020 mayoral election. “There is a reason the Antioch Police Officers’ Association has endorsed the re-election of Mayor Sean Wright and NOT Lamar Thorpe. Mr. Thorpe’s vision for the future of Antioch will INCREASE CRIME, increase our HOMELESS POPULATION and lead to further blight in our City.“

“It wasn’t helpful. It wasn’t a construction conversation,” says Thorpe, who notes that he will be meeting with a new union president in March, as the previous president resigned after Thorpe’s election victory. It also isn’t surprising when considering police unions’ history of reflexively defending the most unconscionable behavior from their members at the expense of the people they serve.

“I’m pro-labor,” adds Thorpe. “But there’s just some things that seem a little unfair that I think jeopardize the public good.”

As for what he’d like to see fundamentally change in the community, he answers quickly: “There are people in our community who have a deep, deep, deep, deep, deep trust of the police. And that’s wonderful,” he says. “But everyone should have that kind of trust. And right now, we just don’t have that.”