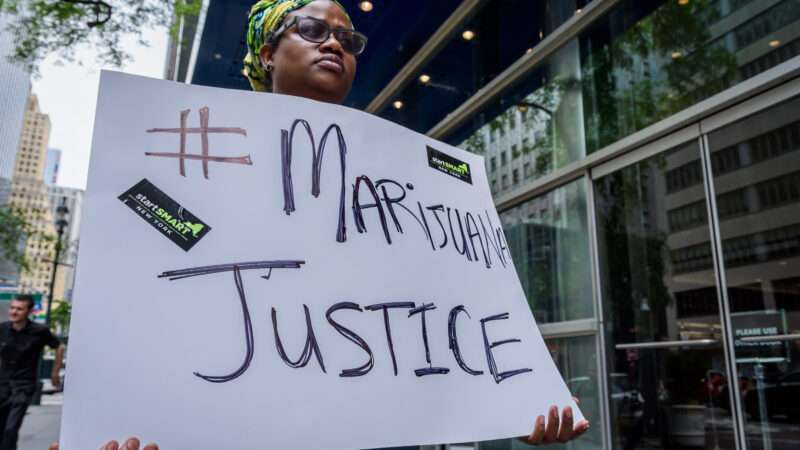 “No one should go to jail for the use of a drug,” President Joe Biden told Americans during a televised Q&A session Tuesday night. He’s correct, of course—and also a hypocrite. Because if Biden really believes what he said and wants to do something about it, he has myriad options. Instead, he talks a good game on decriminalizing drugs while doing nothing of consequence.

For a first step, Biden could absolve prisoners serving time in federal facilities for using criminalized drugs. The president needn’t wait until his term is up to issue pardons and clemencies; why not start freeing victims of the U.S. war on drugs right now?

Biden could also encourage members of Congress and leaders in his party to introduce and support measures that could help end America’s failed, discriminatory, and disastrous drug war. These could include “moving marijuana from Schedule I of the Controlled Substances Act (CSA), a category supposedly reserved for exceptionally dangerous drugs with no accepted medical use, to Schedule II, which indicates that a drug has a high abuse potential but can be used as a medicine, might facilitate research” notes Reason‘s Jacob Sullum. And if that change can’t make it past Congress, perhaps Biden could endorse “a less radical approach, embodied in a 2017 bill that attracted bipartisan support in the House, [that would] revise the CSA’s marijuana ban so that it does not apply to state-legal conduct.”

Biden could also bypass Congress on some aspects of ending the drug war. The American Civil Liberties Union urges the new president to “issue an executive order declaring an end to the war on drugs, directing federal prosecutors to no longer pursue drug cases, commuting the sentences of people serving time for drug-related cases, and pardoning people with past criminal convictions for drug-related offenses.”

Clearly, Biden has no qualms about executive power, having signed more than 30 executive orders in his first week in office alone. These have covered matters both urgent and not so urgent, but none have addressed drug policy.

One of the simplest actions Biden could take is speaking out against policies that escalate drug criminalization. He could start by condemning a bill being proposed by West Virginia Democratic Sen. Joe Manchin, which create a new bureau within the Department of Justice to target online content promoting “major crimes.” The example he supplies of a major crime? Someone trying to sell or purchase drugs.

Manchin’s drug-war-perpetuating “See Something, Say Something Online” Act would also penalize tech companies for not immediately reporting public content or private messages about drugs to federal authorities. Biden has been silent about it.

So far, it seems the Biden administration wants credit for saying the right words about the drug war without actually having to take any action.

“Cancel culture” confusion. As Republicans continue to make the phrase their next big political talking point, a new HuffPost/YouGov poll finds that only 52 percent of respondents had even heard the term—”a number that’s virtually unchanged since last fall,” HuffPost notes. “Only 22% of those who’ve heard the term―roughly a tenth of the public―say they’ve ever used it themselves. Among those who are familiar with the term, 67% say it is a ‘very’ or ‘somewhat’ serious problem.”

Biden says he won’t cancel student loan debt, in a break with the more left-leaning elements of the Democratic Party:

“I will not make that happen.”

Says he doesn’t want to forgive debts of borrowers from elite schools — and money would be better spent on early childhood education. pic.twitter.com/oDwvCJveOm

Man douses self in gasoline, threatens to kill himself.

The nonpartisan Congressional Budget Office today projected national debt will grow to double the size of the economy by 2051 under current law. In dollar terms, debt will grow to $133 trillion by the end of 2051. See our analysis https://t.co/u87fF97d8U. pic.twitter.com/mbaGTRLvQn

• “Political polarization is having far-reaching impacts on American life, harming consumer welfare and creating challenges for people ranging from elected officials and policymakers to corporate executives and marketers,” say researchers in a new paper published in the Journal of Public Policy & Marketing.

• When one bad policy per bill just isn’t enough…

• Donald McNeil, the veteran New York Times reporter fired for allegedly saying a racial slur aloud when discussing it with high school students during a Times-led trip to Peru, disputes the teenagers’ characterizations of their conversation. “I’m amazed at what’s happening. I feel like I’m facing students ‘recovered memories’ from two years ago,” McNeil wrote to friends in an email obtained by The Daily Beast.