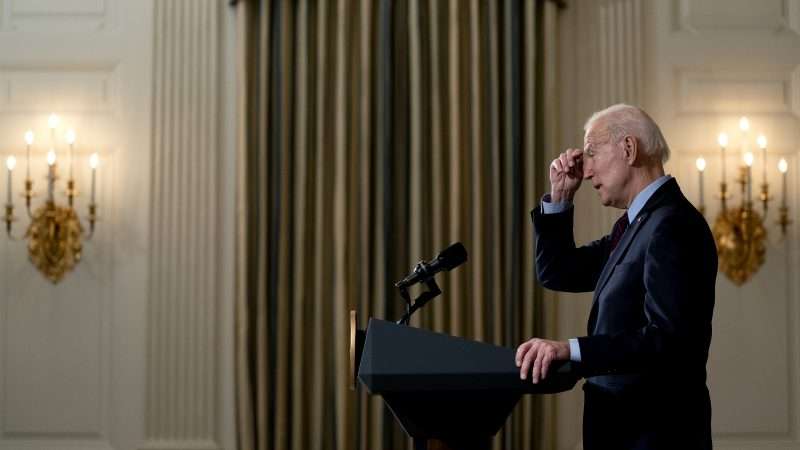 President Joe Biden is signaling that Democrats may have to punt on raising the federal minimum wage to $15 per hour, at least for now.

As part of a traditional Super Bowl Sunday sit-down with the network that hosts the big game, Biden told CBS’ Norah O’Donnell that he doesn’t expect a proposal to hike the minimum wage will be included in the final version of a $1.9 trillion COVID-19 relief bill currently being negotiated in Congress.

“I don’t think it’s going to survive,” Biden said, adding that it is unlikely to pass “because of the rules of the United States Senate.”

Biden is right that the most immediate obstacle to the minimum wage increase is the Senate’s procedural rules that allow a simple majority to pass a bill only if that bill directly impacts federal spending or revenue—a process known as “reconciliation.” Anything else must get at least 60 votes to pass, but Republicans seem unlikely to put up any votes for the Biden COVID-19 bill in its current form.

Whether or not the minimum wage hike can be passed via reconciliation is up to Senate Parliamentarian Elizabeth MacDonough, an unelected and nonpartisan interpreter of the Senate’s sometimes arcane rules. Sen. Bernie Sanders (I–Vt.) told CNN on Sunday that he has “a room full of lawyers working as hard as we can to make the case to the parliamentarian that, in fact, raising the minimum wage will have significant budget implications and, in fact, should be consistent with reconciliation rules.”

As I wrote last week, the argument that Sanders and other progressives are making would, if approved by the parliamentarian, effectively allow any legislation to pass via the reconciliation process.

Even if Democrats could convince MacDonough to include the minimum wage hike in the stimulus bill, they face another problem. Sen. Joe Manchin (D–W. Va) says he will not support the $15 per hour national minimum wage—which would be a disaster for parts of the country with low cost of living, like his home state. Democrats control 50 seats in the Senate, so Manchin’s opposition is enough to sink the minimum wage hike even if it were allowed to pass with a simple majority under reconciliation.

Vote counting aside, Manchin’s point should be taken more seriously by members of his own party. Mandating that businesses increase labor costs at a time when many are struggling to survive hardly makes sense—indeed, the inclusion of a minimum wage hike in a bill that ostensibly aims to give “relief” from the pandemic is darkly ironic. Since most high-cost-of-living states have already implemented minimum wage hikes that go well above the federal floor of $7.25 per hour, any federal increase will fall hardest on places where businesses are least able to afford to pay it.

Biden’s comments to O’Donnell seem to acknowledge the political reality that Democrats are now facing: They can pass a COVID-19 relief bill including another round of direct payments to American households, or they can sink that politically popular and symbolically important effort by demanding a minimum wage hike too.

Unfortunately, Biden is still resisting economic reality. He told O’Donnell that he will continue to push for hiking the federal minimum wage to $15 per hour, even if that measure can’t be included in the relief bill.

“I am prepared, as president of the United States on a separate negotiation on minimum wage, to work my way up from what it is now,” Biden said. “If you’re making less than $15 an hour, you’re living below the poverty wage.”