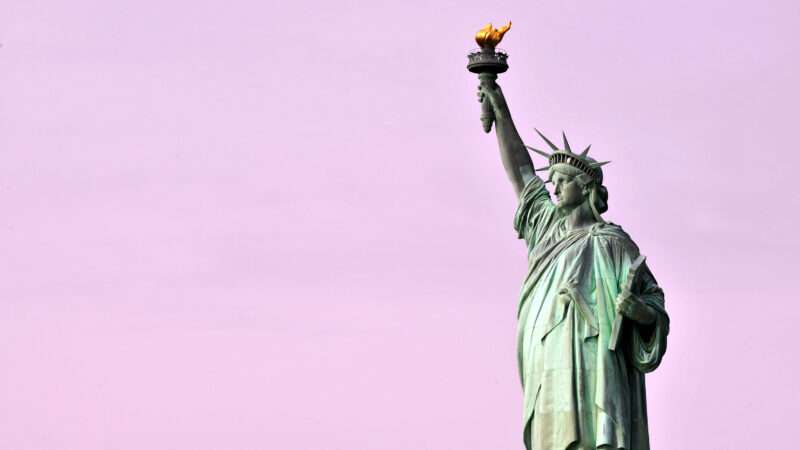 Good and bad in new immigration proposal from President Joe Biden and congressional Democrats. The Biden administration and Democrats in Congress are slated to unveil a new immigration policy proposal today. The centerpiece of it will be an eight-year path to citizenship for undocumented immigrants already living in the country.

According to the Associated Press, the plan—which has not yet been released in full as of this writing—will reportedly not contain any of the “border security” measures desired by the right, which makes its ultimate chances of passing slim.

The whole “no border security” thing is pretty misleading, however. In fact, the proposal reportedly contains a number of bad security theater measures and drug war enhancements.

It would “expand transnational anti-drug task forces in Central America and enhances technology at the border,” the A.P. reports. (While it does not say what kind of tech, this likely means facial recognition.) And it would give $4 million to the amorphous goal of promoting development and fighting “corruption” in Central America (which could simply be another way of saying that the U.S. will spend more time targeting drugs there).

But the Biden immigration plan will supposedly contain a number of good policies, too. In addition to the path to citizenship,

The plan would raise the current per-country caps for family and employment-based immigrant visas. It would eliminate the penalty barring those immigrants who live in the U.S. without authorization and who then leave the country from returning for three to 10 years. It also would provide resources for more judges, support staff and technology to address the backlog in processing asylum seekers.

Democrats in the House of Representatives are supposed to release the full text of the legislation today.

Police in Portland are literally defending trash. They’ve been stationed in a grocery store parking lot where people were trying to dumpster dive for discarded food after the store lost its power and had to throw out a lot of products. Rather than let hungry Portland residents make use of this food waste from the Fred Meyer supermarket, cops formed a barricade around the store and blocked public access to its dumpsters. Authorities justified this move by saying that the food had been unrefrigerated for too long and could cause food poisoning.

Marijuana legalization has been great for job creation. There were “321,000 full-time equivalent (FTE) jobs supported by legal cannabis as of January 2021,” according to the cannabis website Leafly.

That total includes both plant-touching and ancillary jobs—everyone from budtenders to bean-counters.

You can read the latest Leafly jobs report in full here.

• I talk to Phoebe Maltz Bovy about QAnon, radical feminists, massage parlor panic, and the state of sex trafficking discourse in the U.S.

• You don’t have to enlist in the culture wars, Matthew Walthers at The Week reminds people.

• When it comes to civil asset forfeiture, Reason‘s Jacob Sullum writes that “a new study provides further evidence that property seizures are driven by financial motives rather than public safety concerns.”

• Three young adults in Indiana are suing the state’s Department of Child Services, saying the agency placed them and other foster children in “serious and unconstitutional danger.”

• It seems that authoritarian leaders abroad are taking tech policy ideas from U.S. Republicans in Congress.

• Two more Kroger-owned grocery stores in Seattle will close “next month due in part to a new law requiring ‘hazard pay’ for frontline grocery employees who have continued to work during the coronavirus pandemic.”

• Florida unveils another dumb proposal aimed at big tech that wouldn’t fly if targeted at any other industry.

• Good news on civil asset forfeiture out of Arizona: