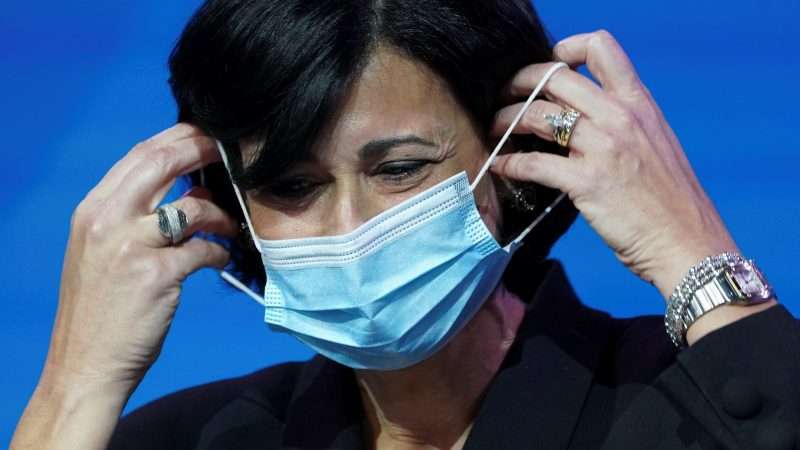 It’s an excellent afternoon to be a treasurer for a private school, or an accelerationist seeking to hollow out public support for the government-run education system.

That’s because the Centers for Disease Control and Prevention (CDC), under pressure from the most teachers-union-friendly White House since at least the 1970s, just released its long-awaited school reopening guidelines, which include the core recommendation that all schools—regardless of age level or ventilation standards or community spread of COVID-19—maintain social distancing of at least six feet.

The CDC’s “science-based reopening” guidance includes five key considerations, presented in order of emphasis: 1) mask-wearing, 2) social distancing, 3) handwashing, 4) cleaning, and 5) contact tracing. Director Rochelle Walensky in a conference call emphasized “prioritizing the first two,” which means that in every school—including ones that are already open, using less stringent standards—there should be student distancing of “at least six feet,” accomplished if need be by “cohorting or podding of students.”

This six-feet rule, first promulgated by the CDC at the height of pandemic uncertainty last March, at a time when people were still wiping down groceries and it was hard to even fathom a room full of kids wearing masks, means in practice that adherents will be open in part-time “hybrid” settings indefinitely. It is for that reason that, ever since better research on kids and COVID-19 began accumulating last summer, pediatricians and infectious disease specialists have been recommending that the rule be relaxed.

“In many school settings, 6 feet between students is not feasible without drastically limiting the number of students,” the American Academy of Pediatrics warned last June. “Some countries have been able to successfully reopen schools after first controlling community-wide spread of SARS-CoV-2 while using 3 feet of distance between students without increases in community spread….Schools should weigh the benefits of strict adherence to a 6-feet spacing rule between students with the potential downside if remote learning is the only alternative.”

Professors Joseph G. Allen and Sara Bleich from Harvard University’s T.H. Chan School of Public Health were blunt about the negative effects of distance-mandated hybrid and remote learning in a November Washington Post op-ed: “The requirement for six feet of distancing has forced many schools to limit the number of students attending in person due to space constraints and thus has become a key factor keeping millions of kids home. That’s a mistake.”

Six feet is not a magical cutoff. It has a weak scientific basis, coming from a fundamental misunderstanding going back decades that the tiny droplets we exhale when we breathe and talk will fall to the ground within six feet.

A recent evaluation of 172 studies from 16 countries found a significant reduction in risk with distancing of at least three feet, but no additional benefit at six feet so long as baseline risk is low enough….

The risks from covid-19 in schools are manageable. The risks to kids being out of school, however, are escalating rapidly. For the sake of our children, it’s time for more scientifically justified distancing guidelines in the classroom.

Two-thirds of the 175 pediatric disease specialists polled by The New York Times just this week said that making schools hybrid to fulfill distancing requirements is a bad idea. “School transmissions will remain close to zero and cohorts are unnecessary” as long as everyone stays masked, U.C. San Francisco Director of COVID Response Jeanne Ann Noble told the Times.

Added University of Colorado pediatric emergency physician Lisa Abuogi: “Children’s learning and emotional and, in some cases, physical health is being severely impacted by being out of school….I spend part of my clinical time in the E.R., and the amount of mental distress we are seeing in children related to schools is off the charts.”

So if infectious disease and pediatric scientists are heavily in favor of relaxing the six-feet requirement, and if thousands of schools in the United States and around the world are already providing in-school instruction with smaller social distancing without becoming the kind of “superspreader events” that American teachers unions have repeatedly scaremongered about, why did the lead infectious disease research agency in the federal government come out with guidelines so indifferent to science and harmful to children?

A Washington Post article first published Thursday gives some background on how the scientific method has been laundered through the political process:

In a sign of how carefully the administration is tending to the many stakeholders, the CDC met with more than 70 organizations as it crafted the upcoming guidelines, according to a person familiar with the outreach who was not authorized to discuss it. Groups ranged from the country’s two major teachers unions — whose presidents met directly with Biden’s CDC head — to organizations focused on children with disabilities, parent groups and even a group focused on charter schools.

Stakeholder science it is!

The federal government is not in charge of local schools. Institutions, especially in the private sector, that are already open five days a week are not likely to ratchet back as a result of today’s guidance. But the six-feet rule will likely have an outsize influence, particularly in Democratic-controlled, big-city public school districts that have been disproportionately shuttered. Why?

Because teachers unions say so, that’s why.

American Federation of Teachers (AFT) President Randi Weingarten turned on a dime after the November victory of President Joe Biden over former President Donald Trump, going from being a staunch, doom-mongering opponent of reopening, to a we-can-do-this-if-we-spend-a-lot-of-money advocate. Notably, despite impressing the credulous likes of The New York Times with her pro-opening bravery, when the rubber has hit the road in local union refusals to reopen schools, she has been steadfastly on the side of the shutterers.

Weingarten and National Education Association (NEA) President Becky Pringle, both of whom met with First Lady (and NEA member) Jill Biden on day two of her husband’s presidency, have been foreshadowing the CDC guidelines as a key step in getting teachers back in school buildings. “I think if we don’t have a more contagious variant, if we get the funding, we get the guidance, we could safely reopen the majority of K-8 schools in the first 100 days,” she told The Washington Post. “That’s April. I think that goal is doable.”

While that very conditional timetable is itself a significant backsliding from Biden’s original 100-day vow (for instance, public high schools simply no longer exist in the reopening vision of the administration or its union allies), pay special attention to the one-two punch of social distancing guidelines + money. Here’s Weingarten giving up the game this week in a USA Today CDC pre-write:

If the guidelines include physical distancing, as she expects, that means full schooling can’t happen this school year unless schools can find 20% to 30% more space and more educators, Weingarten said.

“What you will have is, you’ll have less and less remote full time and you’ll have more and more kids come in for a certain portion of time,” she said. “Will we see this year that everything is back to what we saw in September 2019? I don’t see that happening.”

The $200 billion K-12 package that the administration seeks in its $1.9 trillion COVID-19 relief bill includes around $160 billion, or 80 percent, for personnel. Social distancing requirements make extra hiring necessary. The nifty political dance that Biden and the unions are attempting to pull off is to be hailed as empathetic allies of families even while leveraging urgent parental reopening desire into a massive union payday without strings attached.

It’s a taxpayer heist in plain sight, while kids suffer massive educational and emotional setbacks from a virus that isn’t on balance making them sick.

Public sector unions have long enjoyed the job-creating utility of the ratio—patients per nurse, kids per teacher, prisoner per guard, and so on. The CDC, whose scientific pronouncements about schools have twice been trimmed back by the administration’s political appointees, has delivered to teachers unions one of the cleverest ratios yet.

By suggesting that desks be six feet apart instead of three, even as infections and hospitalizations continue to recede, this scientific body has openly disregarded science and smoothed the way for the government to hire more staff into a system hemorrhaging students. Unless this guidance is revoked, and soon, public schools in big cities likely will not be open full time even by September 2021. For many families, perhaps including my own, the prospect of having three consecutive school years disfigured by the pandemic response will be the final straw.