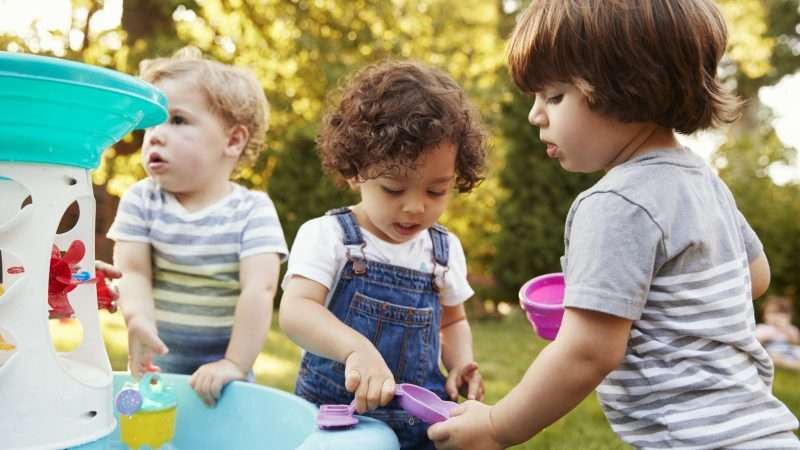 While the plans differ somewhat in their specifics, both aim to subsidize the costs of raising children in a more direct way than the federal government currently does, a noble goal that would likely boost the economic prospects of poorer parents who may not be able to access the full value of benefits provided via the current tax credit system. But with the country more than $27 trillion in debt, both plans ultimately amount to a promise to hike taxes on the very children that the government would go deeper into debt to subsidize—although Romney’s plan does offset some of the new costs by shuttering existing welfare programs—and both may unintentionally hobble the incentives for poor parents to remain in the workforce.

Biden’s plan, currently included as part of the $1.9 trillion COVID-19 relief bill the House is drawing up, would send parents an annual total of $3,600 per child under age 6 and $3,000 per child aged 6-17. The payments would phase out for single parents earning more than $75,000 annually and for couples who earn more than $150,000. Although it is officially just a one-year program (payments would be allocated beginning in July and based on 2020 income taxes), The New York Times reports that the goal is to eventually make the change permanent.

Romney’s plan offers slightly larger benefits that would extend to a more expansive set of parents, but it would also abolish other welfare programs that Biden’s plan would maintain. Romney would pay parents an annual total of $4,200 for every child under the age of 6 and $3,000 per child aged 6-17, with the payments phasing out for individuals who earn more than $200,000 annually or couples earning more than $400,000. It is intended to be permanent from the start.

If a parent (or parents) qualified for the full payments during all 17 years of a child’s eligibility, he or she would receive a total of $57,600 per child under Biden’s plan and $62,600 under Romney’s.

As with any expansion of the federal welfare state, the first question that should be asked is how much will this cost and who will pay for it. Romney’s plan comes with an estimated price tag of $254 billion annually, but the senator says those costs are fully offset with a series of changes to existing welfare programs. The child allowance would replace the existing child tax credit program and require a significant overhaul of the current earned income tax credit (EITC), which offsets taxes for low-income families. He would also permanently abolish the state and local tax (SALT) deduction, which mostly benefits upper-income residents of states with high taxes. It would also eliminate the Temporary Assistance for Needy Families (TANF) program, which is what most people typically think of as “welfare”—a joint federal-state program that provides direct cash assistance to poor families.

Biden is not proposing any cuts to existing welfare programs as part of his child allowance plan, which would cost an estimated $120 billion annually with the full amount added to the large and growing national debt. (Remember, Biden’s plan is less generous than Romney’s, hence the lower total cost.)

On that front, then, Romney’s plan is clearly preferable—although his promise that the child allowance would be revenue-neutral should be scrutinized by independent analysts like the Congressional Budget Office.

Some progressive policy wonks also argue Romney’s plan is better. “It’s clear that Romney’s proposal, due to its generosity and administrative simplicity, is an improvement on the Biden proposal,” writes Matt Bruenig, founder of the People’s Policy Project, a progressive think tank. He’s on board with some of Romney’s proposed offsets, including abolishing the SALT deduction and the TANF program, which has been beset by waste and abuse for years and fails to deliver much in the way of benefits.

Notably, however, he also advises Democrats to swap out some of the “unsavory” offsets Romney has proposed, effectively saying that Democrats should aim for the higher promised benefits and then try to undercut the means of paying for them. That would add to the staggering levels of debt that America’s future generations will have to deal with—a bill that will come due in the form of higher taxes and lower economic growth.

As long as the benefits are offset with cuts to other welfare programs, a shift to a child allowance system could provide larger, more predictable benefits to needy families without adding to the national debt. That ought to be the goal. If Democrats are unwilling to agree to all the offsets Romney has proposed, he should dial back the promised benefits. There’s ultimately no need to subsidize families earning up to $400,000 annually.

One problem worth considering with both plans is how they would alter the existing incentives for poor parents to work.

To understand that, you first have to understand a little bit about how the current child tax credit program works. Right now, parents can qualify for up to $2,000 in tax credits (up to $1,400 of which is refundable, which means it is paid even if the parent owes no federal taxes) for every child under the age of 17. But there’s a small catch: The individual or couple filing taxes must report at least $2,500 in income to be eligible for the child tax credit. In other words, parents who earn no income cannot claim the benefit.

In some ways, the Romney and Biden plans are best understood as attempts to ensure that even the poorest, non-working parents can collect federal benefits to help offset the cost of raising children. The direct child allowance payments will go to everyone; no need to demonstrate that you earned at least $2,500 to get it.

One obvious consequence of paying people who do not work is that you might give other people an incentive to stop working, warns Scott Winship, director of poverty studies at the American Enterprise Institute. “Child allowances are allowances for behavior that would be expected to hurt their own long-term prospects and, more importantly, the wellbeing of their children,” he writes, though he has also acknowledged that the consequences of that shift are, for now, largely unknown and likely to depend on other aspects of the policy.

Winship also worries that the proposed child allowances—which would be the same in all parts of the country—will seem proportionally larger in poorer places, a corollary to the argument for why a national minimum wage is a bad idea.

Winship also notes that both plans move away from one of the major accomplishments of welfare reforms passed in the 1990s, which were largely predicated on creating incentives to work. That’s been the defining feature of conservative welfare reforms for decades, and abandoning it is likely to create some Republican objections. Already, Sens. Marco Rubio (R–Fla.) and Mike Lee (R–Utah) have called out Romney for “undercutting the responsibility of parents to work to provide for their families.”

Any major shift in how the federal safety net operates is naturally going to have unintended consequences, of course. But the inverse of Winship’s prediction is possible too: The current welfare system rewards work at a low level but can punish those who try to move up the ladder by revoking benefits if they get a raise or find a spouse. A system of direct child allowance payments might encourage some people not to work, but it would also free up others to pursue better jobs without worrying about losing welfare benefits in the process.

The federal government should not be in the business of incentivizing people to have children, either with benefits doled out through the tax code or the welfare system. Nor should it pay people not to work, either by borrowing or by redistributing tax revenue from those who do. At their core, both plans are a form of social engineering that rewards people for choosing to reproduce—even if they cannot afford to raise children—instead of working toward other productive goals that don’t involve offspring.

But if the government is going to do those things, it has a responsibility to taxpayers (current and future) to do so in a fiscally responsible, efficient way. If Romney and Biden can streamline the tangled family safety net programs without adding to the national debt, they should be given a chance.