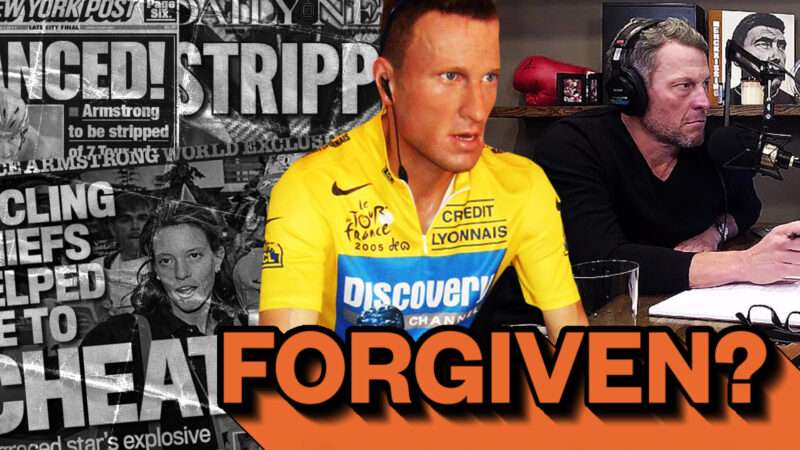 Do people who have acted objectively horribly in public life deserve a second chance, or does giving them a pass contribute to a decline in morality and standards that makes us all worse off?

We’re not talking about the extreme cases, like movie mogul Harvey Weinstein, who was sentenced to 23 years in prison on rape and assault convictions. Or people who get canceled—often unfairly—because of random dumb tweets, online mobs, or years-old statements ripped out of context.

We’re talking about public figures like Lance Armstrong, who was stripped of his record seven Tour de France titles in 2012 after getting caught using banned substances for basically his entire professional career and lying about it. Should we let him and others like him return to the public spotlight when they don’t really own their mistakes or try to repair the damage they’ve done to public trust and confidence? Armstrong is working his way back into the limelight as a podcaster and the face of WEDŪ, an online platform geared toward endurance athletes.

Anthropologist and brand consultant Grant McCracken says we’re too soft on people like Armstrong and our willingness to let bygones be bygones leads to a general decline in public and private morality. ”Here’s a guy who doped, who insisted that he didn’t dope, and accused his competitors of doping,” says McCracken, who has taught at Harvard and worked with Netflix, Google, and Kanye West. “We are open-hearted Americans, we like to think that all people should be forgiven. People make mistakes. It’s always the second act in American culture. I’m not sure there should be a second act. I think once you’ve done something as bad as that you’re done, you’re out.”

In The New Honor Code: A Simple Plan for Raising Our Standards and Restoring Our Good Names, McCracken argues that we need to do more to celebrate people such as his neighbor Bob, who receives little recognition despite being central to his community by helping to build Little League fields, volunteering at the local hospital, and being active in his church. “We need more Bobs. As it turns out, there are about five Bobs in my community,” says McCracken. “If you created a reputation economy and you found some way of giving people credit for these accomplishments, you might be able to inspire 30 Bobs to behave in this manner. And all boats would rise with that tide.”