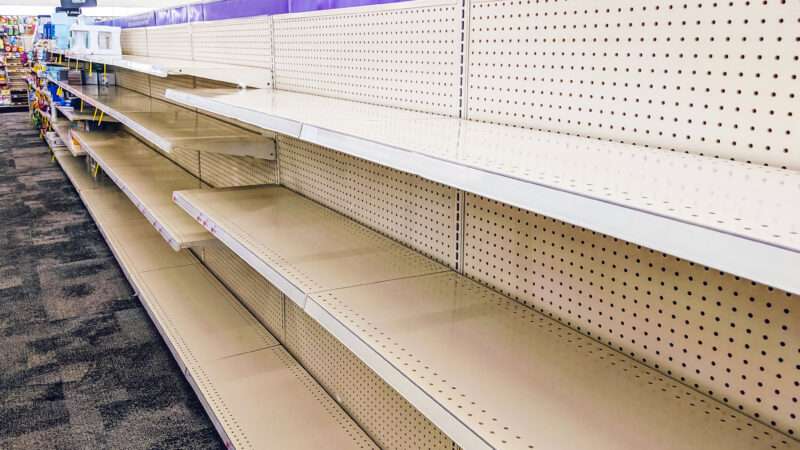 A rare winter storm has left millions of Texans without power, prompting many people to flock to grocery stores for emergency supplies, or to hotels in search of electrified, heated shelter. That surge in demand has prompted predictable, misguided warnings from Texas officials about the dangers of “price gouging” during the state’s emergency.

“We can’t imagine anything more cruel than taking advantage of people who are suffering right now in this disaster,” said Harris County Judge Lina Hidalgo at Wednesday press conference announcing a new initiative whereby residents can report, via text or email, extraordinary price increases to the County Attorney’s office.

The day before, the Texas attorney general’s office tweeted information about its own consumer protection hotline where people can report price gouging to state authorities.

Rep. Joaquin Castro (D–Texas) has gotten in on the action too, in a tweet that inadvertently making the case for the “gougers”.

Meanwhile – potential price gouging by energy suppliers, hotels and other businesses is occurring through the state because of scarcity. No price gouging at H-E-B but here’s just one shelf from earlier today: 5/ pic.twitter.com/DxfEhdsYuu

“Potential price gouging by energy suppliers, hotels and other businesses is occurring through the state because of scarcity,” said Castro when tweeting out a picture of an empty grocery store shelf. “No price gouging at H-E-B but here’s just one shelf from earlier today.”

That the grocery store he visited had both “fair” prices and empty shelves is no mere coincidence. Texas’s price gouging laws effectively mandate this outcome.

When demand surges for a product, but prices are required by law to stay flat or rise only slightly, consumers will quickly buy up whatever they can get their hands on at a cost that doesn’t reflect the sudden urgency of their purchase.

Meanwhile, the higher prices that would incentivize market actors to expand the supply of suddenly scarce goods are cut out of the equation, ensuring that shortages will continue as long as emergency levels of demand remain.

This contrasts with what we’d expect to happen in a free market, as the Duke political scientist Mike Munger explained last year to Reason.

“If the price of something goes up and there’s a shortage, three great things happen,” says Munger. “The first is that consumers buy less. They look at that price and they say, ‘You know, somebody else must need this more than I do,’ and so they leave some for the person behind them.”

Had the H-E-B Castro visited raised its prices to meet market demand, the people who got there before him probably would have bought fewer cans of tuna or rolls of toilet paper, helping to preserve the store’s limited supply.

Without the allure of higher prices, out-of-state companies and amateur entrepreneurs help less incentive to ship in bottled water and generators on Texas’ ice-covered highways. Price gouging laws require these would-be suppliers to take on extra hassle, risk, and expense to sell their wares at the same price they could get back home.

Markets don’t stop working in dire circumstances. Trying to suppress them during an emergency, as Texas officials are doing, is only making the state’s residents worse off.