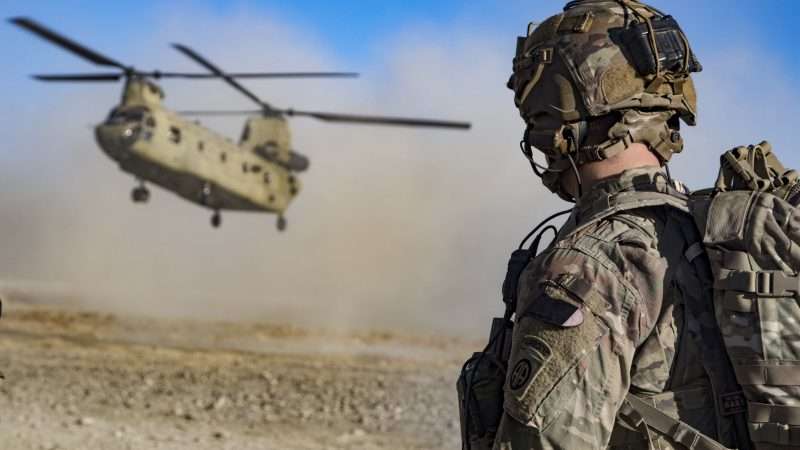 According to reports, the new Biden administration and our allies in NATO are inclined to break the agreement to withdraw troops from Afghanistan by May. The change in direction is attributed to recent violence in the country, but almost 20 years into this forever war, it’s obvious that there will always be enough turbulence in the region to justify intervention for those who want it. With the U.S. military presence at a tantalizingly low level after two decades of fighting, ignoring the withdrawal deadline threatens to become a missed opportunity for cutting our losses and trying something different.

Since many of the troops now serving in Afghanistan were born after the U.S. invaded the country, it’s worth pointing out that the intervention was a response to the Taliban regime’s support of al Qaeda and Osama bin Laden after the 9/11 terrorist attacks. The Taliban was formally deposed by the end of 2001 and replaced by a nominally democratic, western-allied government. But the new rulers appear incapable of holding power without outside support and the fighting has never ended.

“Although almost exactly a year ago the United States entered with some fanfare into a withdrawal agreement with the Taliban, peace talks between the Islamic Republic of Afghanistan and the Taliban have so far yielded few substantive results,” the Special Investigator General for Afghanistan Reconstruction’s 50th quarterly report to Congress noted just last week. “There has been no cease-fire agreement and high levels of insurgent and extremist violence continued in Afghanistan this quarter despite repeated pleas from senior U.S. and international officials to reduce violence in an effort to advance the peace process.”

As a result, a NATO official told Reuters that “conditions have not been met. And with the new U.S. administration, there will be tweaks in the policy, the sense of hasty withdrawal which was prevalent will be addressed and we could see a much more calculated exit strategy.”

The Biden administration had earlier promised “to review the February 2020 U.S.-Taliban agreement” negotiated by the Trump administration with an eye to halting or reversing the Trump administration’s draw-down of troops to the lowest levels since the 2001 invasion. The new president will “assess whether the Taliban was living up to its commitments to cut ties with terrorist groups, to reduce violence in Afghanistan, and to engage in meaningful negotiations with the Afghan government and other stakeholders.”

The Department of Defense appears to have already made a decision.

“The Taliban have not met their commitments,” Pentagon Press Secretary John F. Kirby announced on January 28. “Without them meeting our commitments to renounce terrorism and to stop the violent attacks on the Afghan National security forces and by dint of that the Afghan people, it’s very hard to see a specific way forward for the negotiated settlement.”

But we’ve been here before. Eight years after the initial invasion of Afghanistan, the Obama administration deployed tens of thousands of new troops to the country as part of an overall increase of the American presence. As vice president at the time, Joe Biden vowed, “we will leave in 2014.” Instead, then-President Obama kept troops in place and even expanded their authority to fight the Taliban.

Almost five years later, 20 years into the invasion, after thousands of U.S. military and over 100,000 civilian casualties, there’s still no convincing plan to turn Afghanistan into a stable and peaceful country. Maybe it’s time to try a different approach.

“There has been growing public interest in rethinking the U.S. role in the world,” RAND Corporation analysts noted in a recent and very timely report. “Under one option, a realist grand strategy of restraint, the United States would adopt a more cooperative approach toward other powers, reduce the size of its military and forward military presence, and end or renegotiate some of its security commitments.”

The RAND report discusses some specific recommendations for leaving Afghanistan no matter the country’s continuing turbulence. Despite early hopes to the contrary, it points out, “advocates of restraint have long accepted that the Taliban will play an important role in the future of Afghanistan.” One cited expert with that opinion is John Glaser, the Cato Institute’s director of foreign policy studies.

“Even as America announces her impending withdrawal from Afghanistan, she still helplessly clings to the very fantasies that have kept her bogged down in this quagmire for nearly 20 years,” Glaser wrote last March. “We have not remade Afghan politics. We have not established a stable, democratic, independent government in Kabul. We have not defeated the Taliban.”

“Exiting the war should be the priority, regardless of conditions on the ground,” Glaser adds.

Importantly, the RAND analysts don’t discuss restraint only in relation to Afghanistan, but as part of a big overall shift away from military intervention. While the arguments for restrained foreign policy predate recent events, they’ve become more urgent as “the United States is facing several national security challenges at the same time that the federal budget is under pressure because of public health and infrastructure crises.”

That is, the forever war in Afghanistan may be an especially pressing example of the case for reducing America’s expensive—in lives and money—military commitments. But the same arguments apply to dealings in other regions and with other conflicts, and these arguments “have taken on new urgency because of the direct costs and broader economic effects of responding” to the COVID-19 pandemic.

Undoubtedly, it’s frustrating for policymakers to concede defeat and walk away from messes partially of their own making. But two decades of failure should be evidence enough that an approach won’t work—especially when it was first attempted at a time of greater resources than are now available.

The U.S. and its allies have a deal in place for, finally, getting out of Afghanistan. After 20 years of intervening without remaking the place, it’s time for the U.S. to cut its losses and leave the country’s people to decide their own fate.