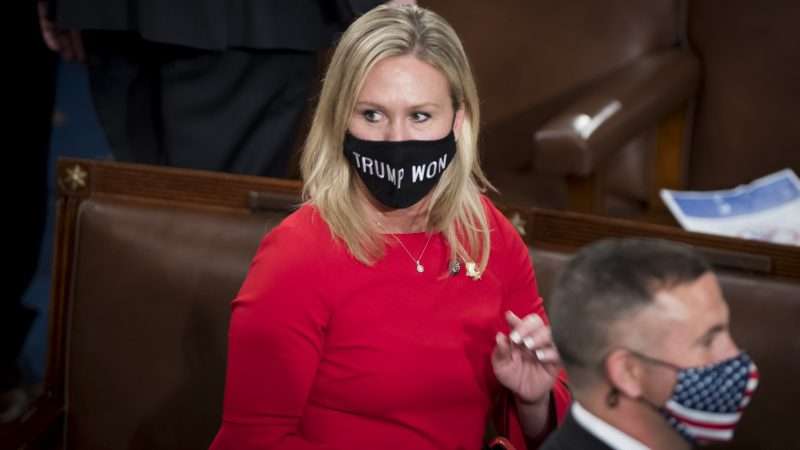 The House Republican Conference is meeting today to consider complaints against Rep. Liz Cheney (R–Wyo.), the third-ranking Republican in the House, and Rep. Marjorie Taylor Greene (R–Ga.), a freshman elected in November. Cheney’s sin is that she was one of 10 Republicans who voted in favor of impeaching Donald Trump for his conduct on the day of the January 6 Capitol riot. Greene’s sin is that she is a loony conspiracy theorist who has endorsed nearly every crazy idea circulating among right-wing agitators, depicting her political opponents as traitors, child abusers, Nazi collaborators, and murderers.

Cheney’s pro-Trump colleagues want her to lose her position as chair of the House Republican Conference. Democrats think Greene “should be removed from her committee assignments in light of conduct she has exhibited.” The New York Times says the debate about which of them should be punished and how is “a proxy battle for the [Republican] party’s future.” If so, it is not a battle over ideology or policy; it is a battle over which should count for more in the Republican Party: blind obeisance to Trump or a basic respect for reality.

Among other things, Greene has backed Trump’s wild claims of massive election fraud, saying the results in Georgia should be “decertified”; embraced the QAnon and Pizzagate fantasies; linked Hillary Clinton to pedophilia and human sacrifice; charged Clinton and her husband with killing John F. Kennedy Jr.; described Barack Obama as a secret Muslim who commissioned the murder of Democratic National Committee staffer Seth Rich; suggested that House Speaker Nancy Pelosi (D–Calif.) and other leading Democrats should be executed for treason; peddled an explanation for a California wildfire involving space lasers, the Rothschilds, and Gov. Jerry Brown; called Jewish billionaire George Soros “a piece of crap who turned in his own people over to the Nazis” and “a Nazi” who is “trying to continue what was not finished”; argued that the Parkland and Sandy Hook school shootings were “false flag” operations aimed at promoting gun control; claimed there was “never any evidence” that a plane crashed into the Pentagon during the 9/11 attacks; and declared that anyone who is an observant Muslim “does not belong in our government.”

This week Senate Minority Leader Mitch McConnell (R–Ky.) castigated Greene without naming her. “Somebody who’s suggested that perhaps no airplane hit the Pentagon on 9/11, that horrifying school shootings were pre-staged, and that the Clintons crashed JFK Jr.’s airplane is not living in reality,” McConnell said in a statement to The Hill. “This has nothing to do with the challenges facing American families or the robust debates on substance that can strengthen our party.”

McConnell, who last month said Trump “provoked” the Capitol riot with “lies” about the election but nevertheless voted against trying his impeachment in the Senate, warned that “loony lies and conspiracy theories are cancer for the Republican Party and our country.” Sen. Mitt Romney (R–Utah), a longtime Trump critic, says the GOP has no place for “kooks” like Greene. Even House Minority Leader Kevin McCarthy (R–Calif.), a Trump loyalist who is trying to decide what should be done about Greene, concedes that some of her comments are “deeply disturbing.”

Greene, who apparently recognized herself as a purveyor of “loony lies and conspiracy theories” even though McConnell did not name her, rejected his criticism. “The real cancer for the Republican Party is weak Republicans who only know how to lose gracefully,” she tweeted on Monday. “This is why we are losing our country.”

After news outlets exposed her outré views, Greene dismissed the evidence as “a few social media posts before I ran for Congress.” She said many other people had managed her accounts and “some did not represent my views.” By Greene’s account, then, she let other people say some of that crazy stuff while speaking on her behalf, which hardly reflects well on her judgment. But unless she also hired an unhinged Greene impersonator to do interviews and appear in online videos, that excuse gets her only so far.

Trump, whose only criterion for liking people seems to be their loyalty to him, remains a fan. “I had a GREAT call with my all time favorite POTUS, President Trump!” Greene tweeted on Saturday. “I’m so grateful for his support and more importantly the people of this country are absolutely 100% loyal to him because he is 100% loyal to the people and America First.”

Greene sees all the criticism of her as a validation. “The DC Swamp and the Fake News Media are attacking me because I am not one of them,” she tweeted on Monday. “I am one of you.” For Republicans, that’s a problem.